Just a few days before he died in 2015 the late John Sheppard DCM gave me for safekeeping the medals of Dudley Crawford Gibson and, sadly, the personal history of them is now lost.

Medals and their ribbons tell another story and here are Dudley's 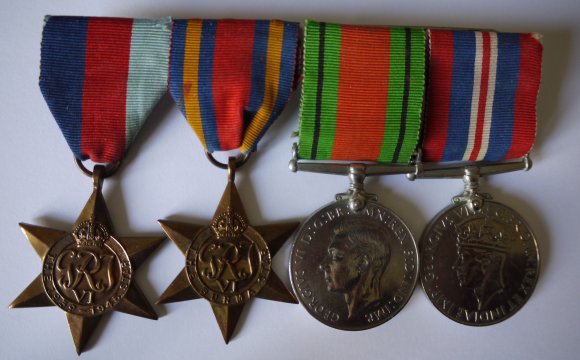 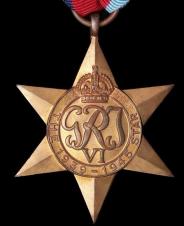 The ribbon is in three equal stripes of dark blue, red and light blue and represents the Royal and Merchant Navies, the Armies and the Royal Air Force. It is worn with the dark blue stripe furthest from the left shoulder

Sometimes mistakenly referred to as the 'Victory Medal' 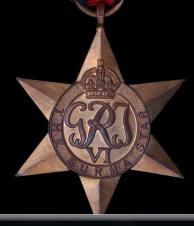 The Burma Star was awarded for one or more days' service in Burma 1941-1945. Those serving in Bengal and Assam (India), China, Hong Kong, Malaya or Sumatra also qualify. Naval personnel must first qualify for the 1939-1945 Star with the Burma Star awarded for service at sea but restricted to the Bay of Bengal within specified boundaries. RAF crew also qualify if at least one operational sortie against the enemy has been completed.

The central red stripe represents the British Commonwealth Forces and the orange stripes represent the sun. The red and orange stripes are on a contrasting background of dark blue. 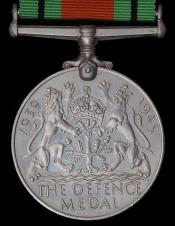 The uncrowned head of King George V1 is showing with the reverse bearing the Royal Crown resting on an oak tree and flanked by two lions above the words 'The Defence Medal' with the date 1939 top left and 1945 top right.

The flame and green colours are symbols of enemy action on our green and pleasant land and the two black stripes represent the black-out. 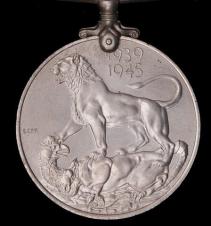 The 1939-1945 War Medal was awarded to all full time personnel of the armed forces wherever they were serving, provided that they had served for at least 28 days between 4rd September 1939 and 2nd September 1945

The crowned head of King George V1 is showing with the reverse being a lion standing on a dragon with two heads and the dates 1939 and 1945 at the top.

The red, white and blue stripes represent the Union Flag