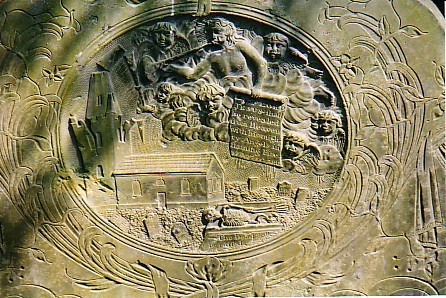 This low-relief tondo carved in slate is on a headstone in the churchyard of the Rothley Parish Church. The headstone is sited in front of a row of yew trees 10 metres east of the east end of the church close to the boundary.
It measures about 12 inches across and represents the Last Judgement. It was quite a task for one of the many craftsmen working in Swithland slate and was done in the last decade of the 18th century.
A trumpet blowing archangel, surrounded by a cluster of convoluting putti, holds a scroll with a quotation from the Second Epistle of St. Paul to the Thessalonians: Chapter 1, verses 7 and 8.
Below the scene is said to be St. Leonards Churchyard at Swithland with the graves opening on Judgement Day and the church spire tumbling down. Why did the stone mason decide to wreck Swithland Church instead of Rothley? It has been said that, as Swithland was the centre of the slate quarrying industry, the mason would have been more familiar with Swithland Church than Rothley.

The headstone is a double one, William to the left and Catherine to the right.
The inscription to William reads "To the Memory of Mr Willm. Hunt who after enduring with Patience a long series of Affliction: resigned this mutable state of Existence on the 10th Day of March 1794. Aged 66 years"
The inscription to Catherine reads "To the memory of Catherine Cort, Daughter of Mr James Cort of Great Bowden and Wife of William Hunt of Rothley House. She died Feb 1st 1781. Aged 58 years" 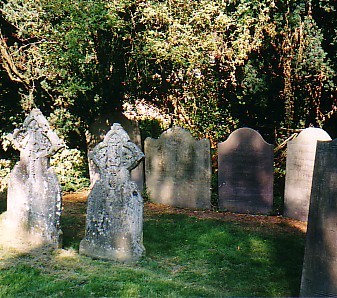 The Hunt Headstone is a Grade 11 Listed Monument with a listing date of the 12th October 1984.
This is a fascinating headstone and well worth a visit.