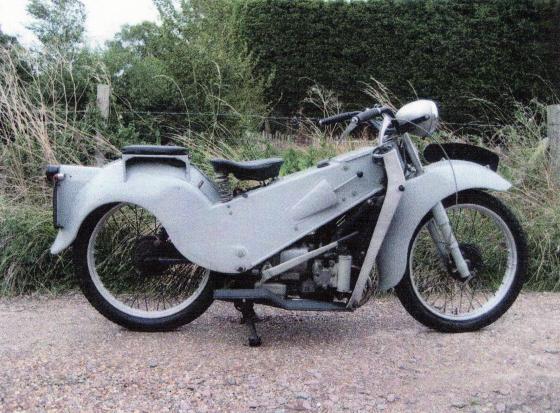 A motor bike the same as Jane's

When I was in my mid teens in the 1950's, I expressed a wish to learn how to swim. My father, Hubert Sleath, said that he knew someone who could teach me. I was introduced to Miss Silcock who lived in Rothley and worked at Cossington Street Baths in Belgrave. Apparently she regularly swam in the canal at Cossington.

Mr first lesson was at her home, where I practiced holding my breath and putting my face under water. This was carried out in her water butt which collected rain water from the roof. It has been a barrel and the water tasted vaguely of beer!

This was my first introduction to Elsie Gertrude Silcock who would have been in her early 60's at the time.

She lived in Rothley at 26, North Street, which was a wooden bungalow on a piece of land that is now part of the Royal Oak car park. It was accessed by steps next to Buddon Cottage. It was very basic and had no running water, just a tap halfway down the garden and the said water butt.

At this time she started to visit our house on Hallfields Lane quite regularly. Though not at times of the day that my Mother approved of! She told us that she had never liked her name Elsie, so we asked what name she would have preferred and so to us she became Jane.

Jane was a complete eccentric, the likes of which I have never known again. She rode a motor bike wearing a long brown leather coat and flying helmet. She called the bike Henry and referred to it as if it was a person! She did this on occasions when she was stopped by the police and they just waved her on! My father told me that she had toured the coastline of the British Isles on Henry!

In 1957, I became a Dress Design student and fitted some of Jane's clothes for her and we had chats about current fashions. This was somewhat surprising as she seemed to have little money and quite a dumpy figure. A friend would give her good quality but well worn cast offs and I would make them fit. Jane had one shoulder that seemed to have dropped, so was delighted when I could whip out a sleeve, slope the shoulder seam and replace the sleeve.

One day, we had a discussion about her swimming costume. She implied that it did nothing for her bust shape. I suggested that if she went to a haberdashery counter she could purchase some 'cups' which we could stitch into the said costume. Some of our family were still having breakfast one morning, when there was a knock at the door. There stood Jane in a long overcoat. She whipped the coat open with a "ta dah!" and was wearing nothing but her swimsuit! And so with some careful stitching, we enhanced her shape!

There was a fashion in the fifties for a garment called a "cuddle skirt". These were made from fluffy mohair-looking fabric and were pleated into a waist band. They came in bright colours and Jane purchased a shocking pink one! I saw her at the bus stop one day wearing the pink skirt, but being Jane she had it on like a cape! With the waistband across her shoulders!

On another occasion, she was wearing a hat like a matador's, with a very level brim and a ribbon hanging off one side. It was in lime green! She posed in it with hand on hip!

Jane had a friend with a dependent mother and once a year Jane took over the caring, whilst the friend had a holiday. In return, Jane was given a week at Butlin's holiday camp.
As they all had swimming pools, Jane was in her element! One year after such a trip, she proudly told us that she had won the diving competition! We had great aunt Mabel staying with us when Jane came to regale us with this news and fortunately auntie had a sense of humour!

Jane took off her shoes and positioned herself with toes curled around the edge of the hearth rug! She then took up a diving pose so that we were in no doubt why she had won. This was all performed with not an ounce of self-conciousness!

I saw less of Jane after I was married in 1964, when I moved out of Rothley. It was the tradition then, to send people pieces of wedding cake in special little boxes that could go by post. I sent one to Jane and received the following letter of thanks:

Dear Brenda
It was lovely of you to send me a piece of your wedding cake. I am not at all well up in such matters & not quite sure what the procedure should be-ought I to go into the church yard at midnight, bow three times to the moon, if visible, & then sit on a tomb stone & slowly eat my cake? Oh no-I've already got a terrific "cold". No! No! To put it under my pillow would be just a messy waste-I never dream anyway. So I ate it and it was the very nicest cake I have ever had. It was grand-thank you for the kind thought. Was there any left? 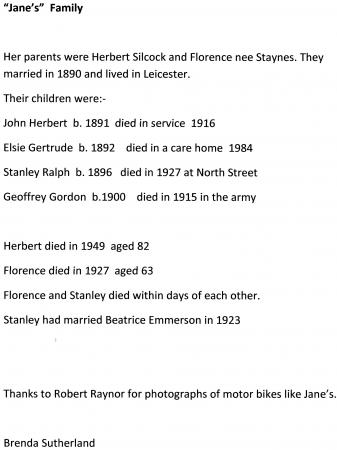