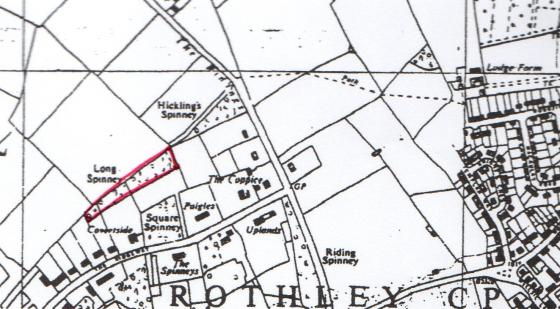 This spinney runs along the back of the houses along The Ridgeway and forms part of their back gardens. There is no public access 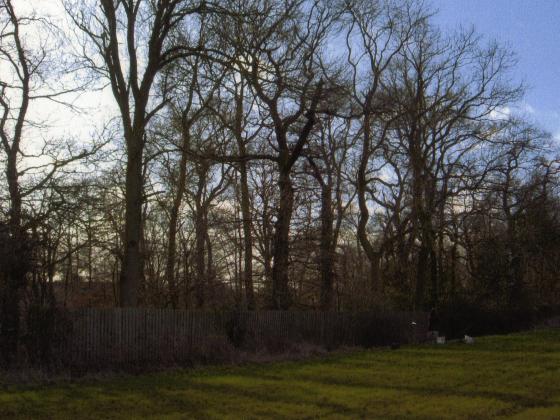 We started to look at Long Spinney as part of our work to record the Ancient Ecclesiastical Boundary of Rothley (RAPS) in 2008. The length of the original spinney abutting the existing field was part of the ancient boundary, not the present day boundary (2012).

The spinney has become part of the back gardens of the properties along The Ridgeway and varies in vegetation and accessibility according to the desires of the owners.

The ditch that runs along the field boundary remains intact. Information about this can be found in the RAPS survey. Details below.

The trees within the spinney vary in size and access was not gained to take measurements. It is mainly hardwoods.

The spinney is shown on the 1884 maps but the date of planting is not known. 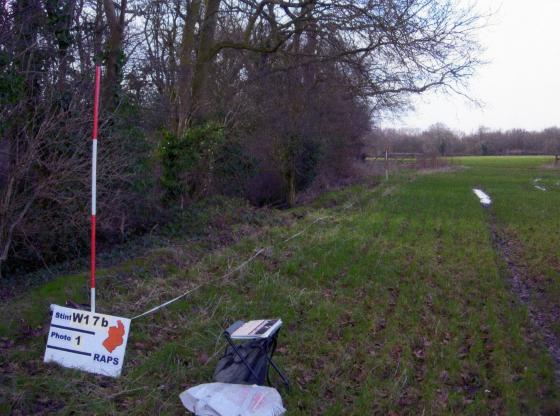 The Rothley Ancient Parish Boundary runs along the edge of Long Spinney. January 2008 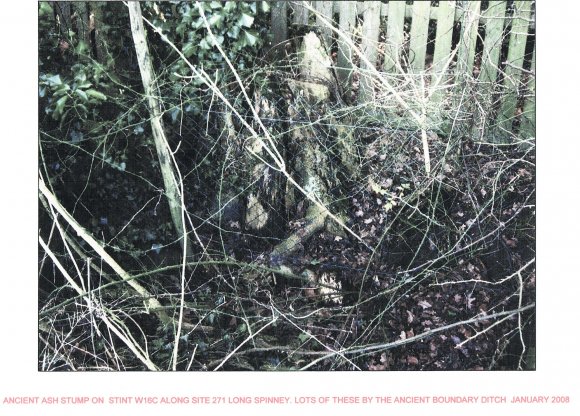 Lots of these by the Ancient Boundary ditch. January 2008

The Rothley Ancient Parish Boundary runs along the boundary of Long Spinney and details of this are found in Stints W 16 and W 17 below.

We now have easy access to this part of the ancient boundary with the survey from the field. The ancient parish boundary continues as a good ditch with remnants of the trees and shrubs. Long Spinney is no longer a complete spinney but has become part of the rear garden of the houses along this part of The Ridgeway. The ditch is beside the field with the ancient hedgerow next to the gardens but the ditch has not been 'taken' as part of the garden. However, in places the hedge has been obstructed by either a wooden or wire fence so what is left does not get any management. Dogs Mercury grows on either side of the ditch.

There are some good ancient Ash stumps that would have been ancient parish boundary trees. An ancient ash trunk lies fallen over into the field in Stint W16C.

In part of Stint W16D the owner has not disturbed the hedgerow so this is more intact that the rest of the stint.

One good thing about the owners not extending their gardens to beyond the ditch is that the ancient ditch has not been filled in with garden debris or soil so part of our history remains intact in January 2008.

As in Stint W16 the ancient parish boundary ditch continues along the field boundary with Long Spinney.

The boundary hedgerow in Stints W17A and B is unkempt with a lot of snowberry, which is very invasive.

In Stint W17C we have part in Twelve Acre Field and then go over the fence into Site 105 Six Acre Field. There is a good sized Ash close to the boundary where Site 110 meets Site 105 and this has been recorded as Tree 601 with an estimated girth of 3m. There are also smaller Ash trees along this part of the boundary.

At the end of Stint W17C and into D, where we are now in Six Acre Field, there is a noticeable change in the way the ancient parish boundary has been treated. On the maps, Long Spinney ends in Stint W17D but there are still ancient trees in the rear of The Ridgeway gardens in the following stints. Here in W17D we see wire fencing on the field side of the ditch, possibly 'taken' by a resident many years and planted up with hawthorn giving the appearance of a parallel hedgerow. Trees continue to be Ash and I have recorded one with an estimated girth of 2m as Tree 602, which is being strangled by ivy and in a bad state.

The ancient parish boundary ditch is still much in evidence but human disturbance is ahead.