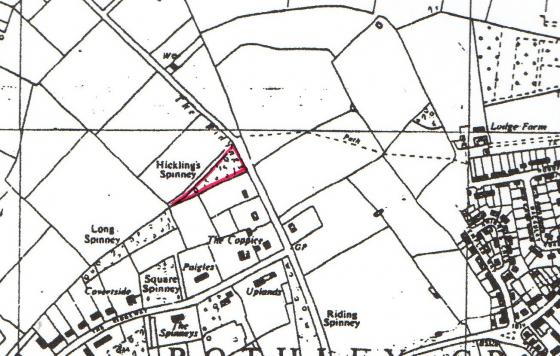 This is an interesting spinney in the history of Rothley. The Rothley Ancient Ecclesiastical Boundary runs through it and the boundary ditch can be clearly seen. This has been recorded as part of the boundary survey (RAPS) and details are attached.

There is a Pond 45 Hicklings Pond which is shown on the old maps and is still there when you get through the undergrowth and still contains water.

A house of very large proportions is being built at the end of this spinney and it could be in danger of being cleared. There is a Tree Preservation Order on the whole of this spinney.

It was good to see lots of Dogs Mercury in this spinney of mixed species with hawthorn, hazel and ash. Snowberry is a major problem in spinneys as it spreads so much and offers so little. 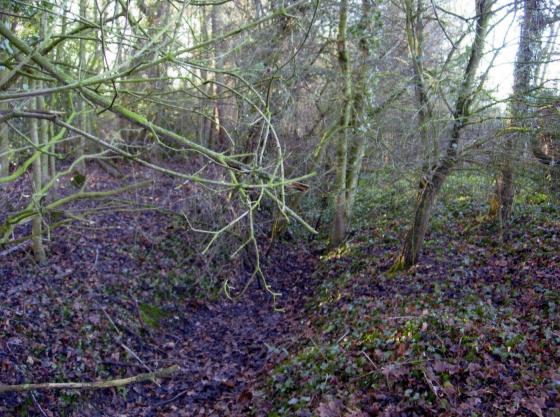 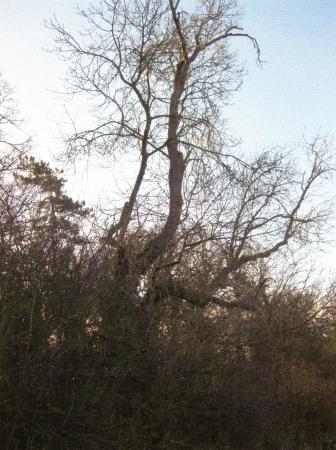 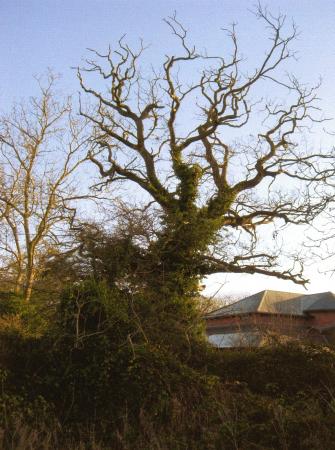 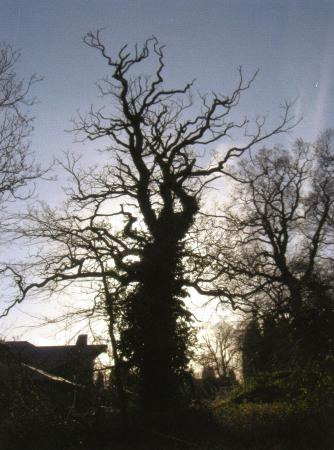 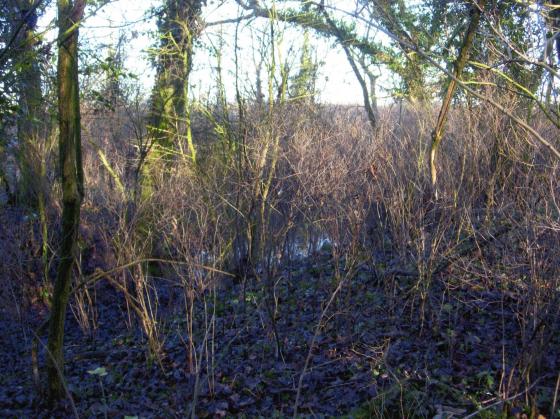 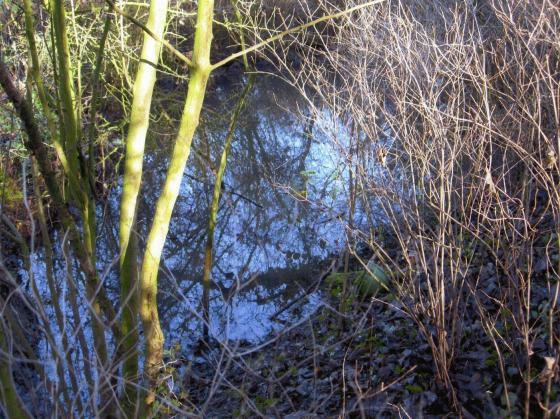 Location: Stint 14a is the end of the hedgerow from West Cross Lane to The Ridings. Stint 14b crosses The Ridings to run alongside Hickling's Spinney Site 270 and recorded from Site 269 West Plain Close

Map Title: As above

We complete the hedgerow along the boundary with Site 183 North Stocking by completing Stint 14a to the road called The Ridings. The ditch continues right to the end of this part of the stint.

In March 2002 I recorded a small patch of Dogs Mercury, an Ancient Woodland indicator plant, to the right of the gateway at the end of 14a. There is also the remains of an ancient tree stump, which would have been a major tree on this boundary. We are now ready to cross The Ridings to start on the boundary running up to where we started on the 15th October 2003.

After a morning on the 9th January 08 just walking and looking at this part of the boundary we re-started our recording on the 23rd after a lot of wet weather during this month.

Walking over The Ridings we found excellent remains of the Rothley Ancient Parish Boundary within Hickling's Spinney. The ancient boundary is not the field boundary, but the latter runs parallel to the ancient boundary, which is a really good ditch within the spinney. There is a pond, POND 45, at The Ridings end of Hickling's Spinney in Stint W14B with the ancient boundary ditch flowing in and out. This pond was full of water following all the rain in January 2008. This pond is shown on the Official Boundary Survey of 1884.

As it was very difficult to record the actual ancient parish boundary along the ditch due to lack of light and thick, tangled vegetation, we photographed and recorded the field boundary hedge with additional photographs taken of the ditch at appropriate accessible points.

The field boundary hedgerow the length of this stint is a good mix of hawthorn, blackthorn, ash and hazel with small amounts of elder. There is also a good amount of field rose. At the start of Stint 14B there is a large amount of snowberry, which is a very intrusive due to its suckering habit. As this hedgerow is built up to the edge of Hickling's Spinney there is also intrusion of small trees from the spinney towards the light. Due to the 'modern' mix of species this hedgerow would come out at a good age but the size of the stems and trunks does not indicate this to be ancient.

In the area between the ancient ditch and the field boundary there is a lot of Dogs Mercury and Bluebells. In one area there is a small patch of snowdrops.

Along the bank of the ditch there is evidence of ancient tree stumps and there is an Ash tree, Tree 597, in Stint 14B with a girth of 3.5m.

This stint follows on from Stint W14 in exactly the same way with the ancient parish boundary ditch within Hickling's Spinney and our photographs taken on the field boundary hedgerow of West Plain Close. Again, good amounts of Dogs Mercury in the spinney.

The hedgerow contains much the same species as Stint W14 with hawthorn, hazel and ash dominant and field rose.

The ancient parish ditch has an excellent ancient Ash, Tree 598, in Stint W15C with a girth of 4.1m. There is evidence of ancient trees along the ditch with some good rotted stumps.

15m of Stint W15D finish at the field boundary with Site 110 Twelve Acre Field and the end of Site 270 Hickling's Spinney. Near this point is an ancient Oak that is not in very good condition. It is an important boundary tree at an important point so it has been recorded as Tree 599.

The last 15m to complete Stint W15 is in Site 110 Twelve Acre Field and here we see the start of Site 271 Long Spinney. The boundary ditch is still very good here but much of the boundary hedgerow on the spinney side of the ditch has been destroyed and in varying states of destruction with fences erected in some places as shown in Stints W16 and W17.

Long Spinney is shown on the old and later parish maps and whilst the main structure is still there it has been divided into the bottom parts of the gardens along The Ridgeway, hence the wooden and wire fences. 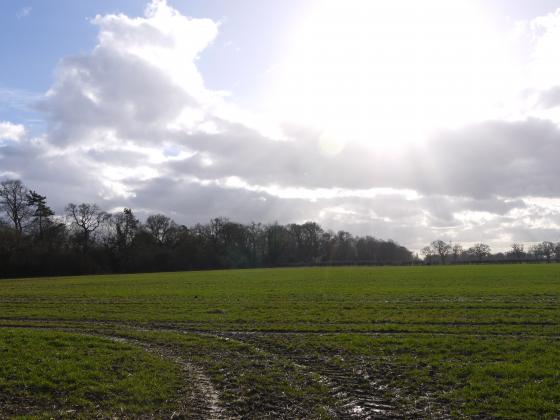 Looking to Hickling's Spinney over Site 269 West Plain Close with The Ridgeway beyond the spinney. February 2015 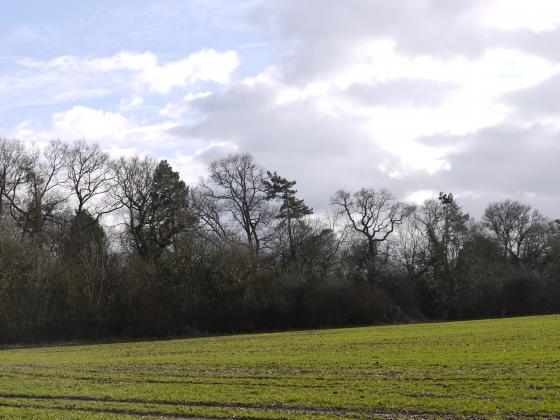 Looking over Site 269 West Plain Close to Hickling's Spinney with The Ridgeway beyond. February 2015 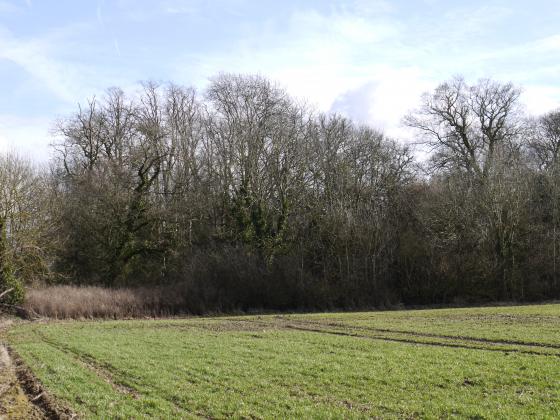 Looking over Site 269 West Plain Close to Hickling's Spinney where the left hand side meets The Ridings. February 2015