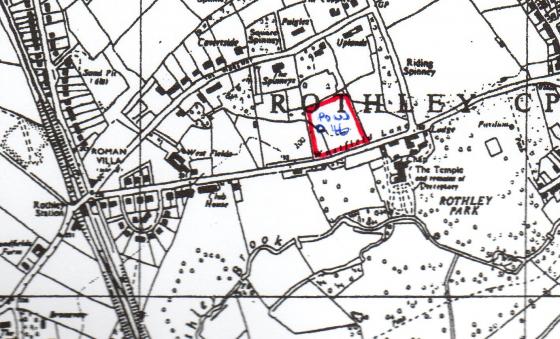 For this survey I have included the small field to the left as it looks like one large field divided by a hedgerow that curves to the top. The field to the right of the hedgerow is part of the Rothley Ancient Temple Extra-Parochial Detached 2 land.

On the day of our visit the field looked beautiful covered in pristine snow with just animal and bird tracks to show how important these fields are for wildlife.

Next Wednesday, subject to yet more snow, we hope to start recording the actual Ancient Temple Boundary. Thoughts on the ridge that runs through this field on the ancient side will feature highly in discussions!

I made a visit with Brian Verity so that he could see the ridge and contours with the snow on the ground.

This was the day to start recording the ancient boundary which is the hedgerow that divides this field and gently curves round into the next field. The hedgerow has ancient trunks of hawthorn and elder as well as rose and blackthorn. There are two large Lime Trees 619 and 621 with girths of 3.3 and 3.6m and a Lime stump with a girth of 3.4m. This tree looks as though it was struck by lightning or victim of a gale, not cut down. A lightning strike might also have been responsible for the state of Tree 621 which has had a large piece of its trunk sliced down. This 'slice' has touched the ground and rooted and as the field is used for cattle grazing it remains undisturbed by the farmer who rents the field.

There is a very good ditch along the boundary which was running with water from the pond due to the snow and rain over the previous week.

A further visit is needed to record the trees outside the ancient boundary line.

Brian and I made a further visit to record the group of four trees close to the boundary with Westfield Lane which are outside the Ancient Temple Boundary.

This field is cattle grazed in the spring and summer, the paddock at the back of the house on The Ridgeway is mown for hay and at the time of our visit the ground was in very good condition as it is not used for horses. 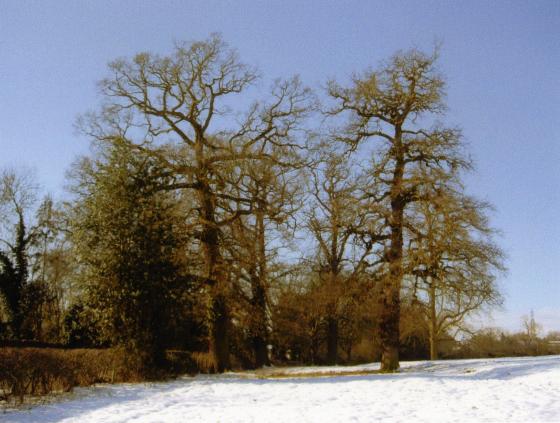 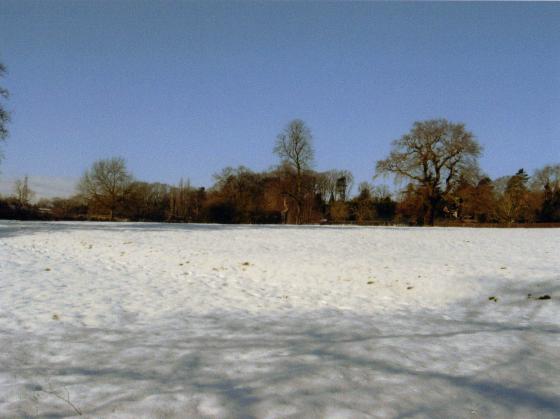 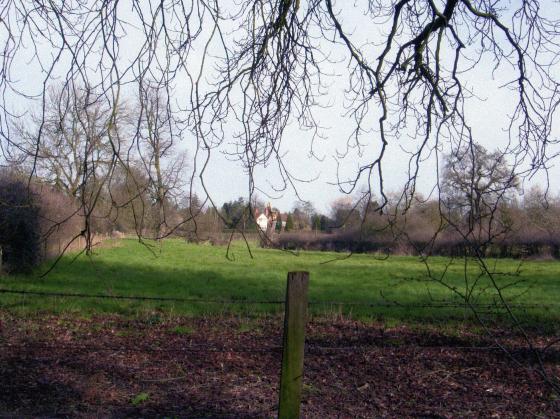 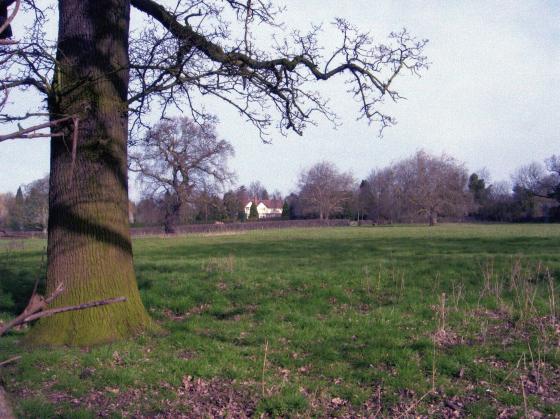 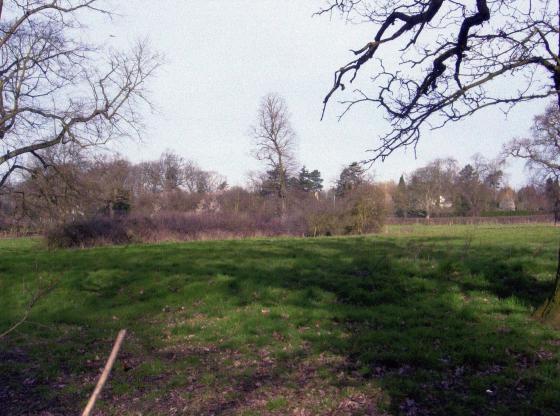 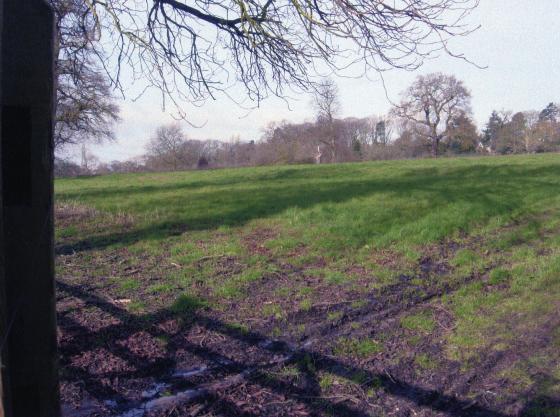 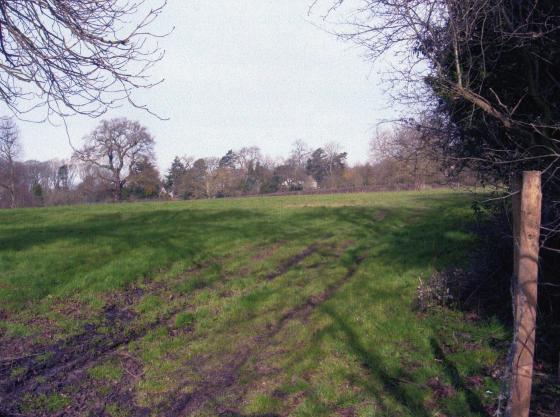 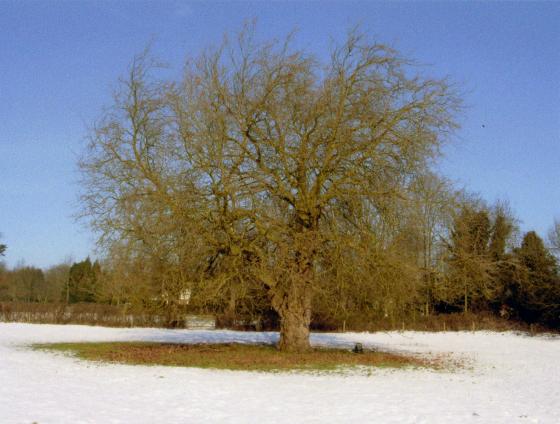 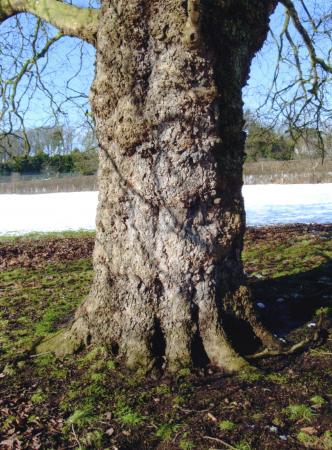 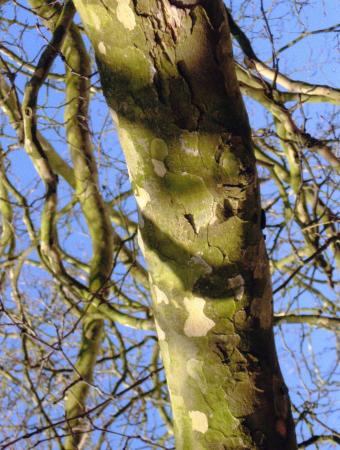 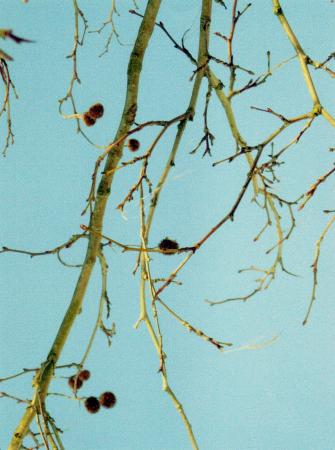 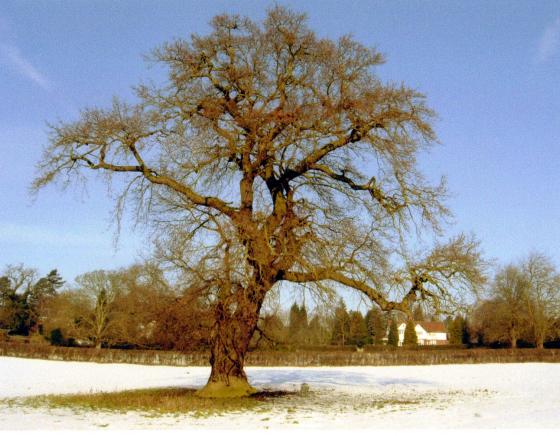 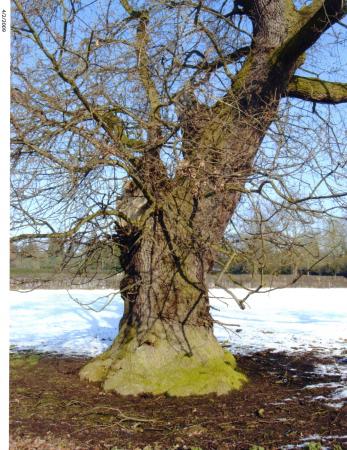 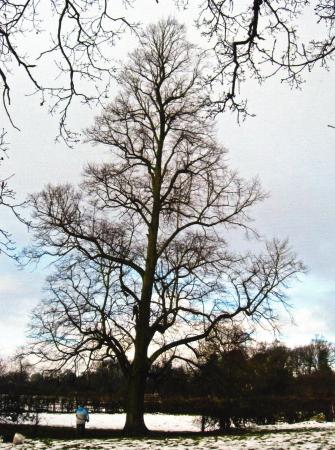 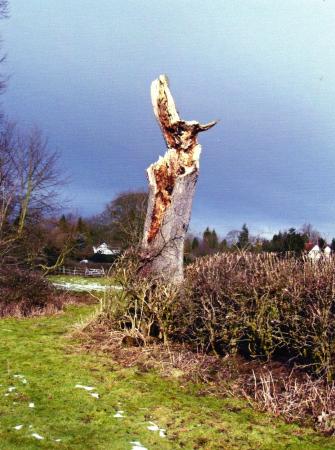 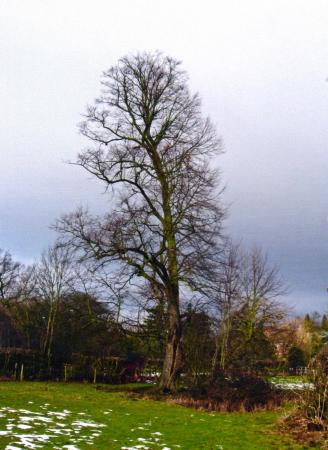 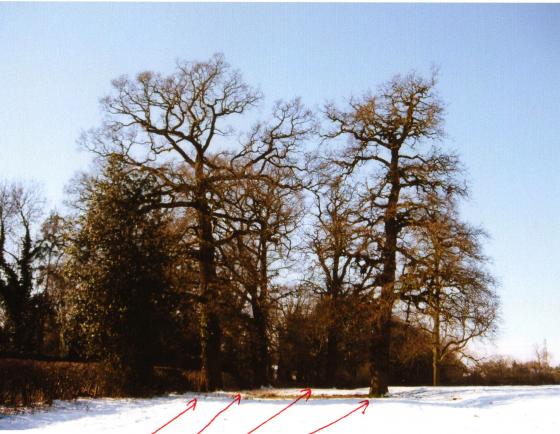 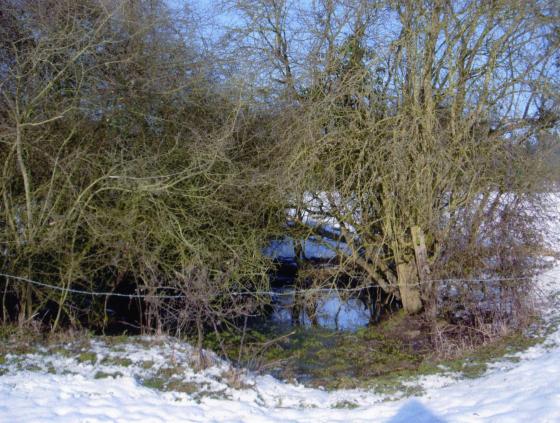 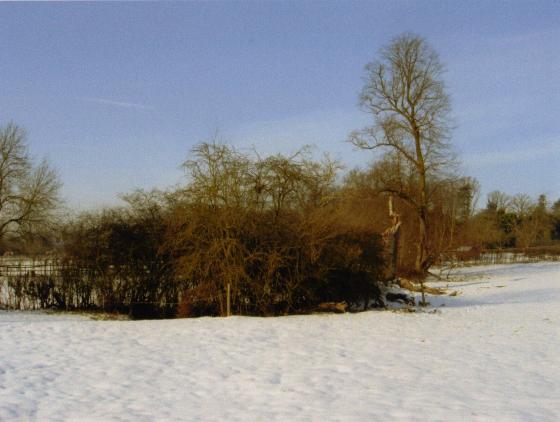 This was a sunny day but the fields were snow covered. Terry and I decided first of all to call at a house on The Ridgeway, as the property and paddock boundary form the boundary to the field where we want to be working and then the owner is aware of what we are doing. snow, to view the ancient boundary and the trees.

There is a lovely Oak in the field, Tree 618 in our Rothley Tree Survey and a lovely London Plane Tree 617 with a girth of 3.8m. This is an unusual tree in Rothley but this was part of the Ancient Temple Estate and could have been planted as a specimen tree. There is another London Plane in the paddock belonging to a house on The Ridgeway.

There is also a pond by the ancient boundary and this has been recorded as Pond 46 Lawn Field Pond in the Rothley Pond Survey.

Depending on the weather we hope to record the stint next week.

A return visit with only a small amount of snow lying on the ground.

This stint covers 105m instead of the usual 120m as this takes us over the field boundary to boundary. There is no hedgerow in this stint but it runs along a very interesting contour as shown on the OS map with the ridge at an estimated ½ metre drop.

This field holds a lot of mysteries with its humps and bumps so Terry is on a mission to research old maps for clues.

Outside this part of the ancient boundary are some lovely oaks that will be recorded as part of the Natural History Site Survey.

This is a very interesting part of the ancient boundary as it has all the features I enjoy.

A ditch runs the whole length of this stint and due to the snow melt and rain this was in good use as the outflow from the pond on the boundary in Stint 7b. The field to the right of the hedgerow, part of the Temple area, is higher than the small part of the field outside the Temple area.

Trees. The trunks of the hawthorn are ancient, there are signs of layering in the distant past and the elder stumps are very large and twisted. These features indicate an ancient hedgerow.

In Stint 7a there is a beautiful, very tall Lime Tree 619 with a girth of 3.3m, an assumed Lime stump Tree 620 in Stint 7 with a girth of 3.4 and Lime Tree 621 with a girth of 3.6m in Stint 7d. Tree 621 has a large split in its trunk, possibly a lightning strike, and this part has fallen to touch the ground and started to grow from new small trunks. Limes can do this and if left alone can become a 'Lime Cathedral' i.e. you can stand by the original trunk and be enclosed by arching branches that have re-grown from their bases to form an enclosed space. Tree stump 620 is assumed Lime by its bark, size and other Limes in the same hedgerow. There are other Limes within the old parkland around this area.

There are gaps in the hedgerow that appear due to access needs, not because of a poor planting but it is sparse at the end of the stint where it curves round to join the next field.

There is a very good pond, Pond 46 Lawn Field Pond, which is bordered on the ancient boundary with Blackthorn.

This stint has ancient hawthorn and elder trunks, two mature lime trees and one mature stump, a good ditch running with water, a good field pond and a curving boundary.

This is when we completed the last 11 metres of stint 7d in the next field.

We first of all spoke with the gardener of the house at 33 The Ridgeway with a boundary to this part of our stint. He had been the gardener for over 30 years so remembered the area well and was able to tell us about the old greenhouse at the back of Elizabeth Fothergill's house that we found interesting when working in that area. Mr Brian Davenport, the gardener, does have a photo of the old greenhouse and would be willing to supply a copy if we contact him on 0116 2511465 but he works everyday on this garden.

This final part of the stint shows a change of hedgerow from hawthorn to old individual upright trunks of hawthorn and prunus plus ancient elder trunks. Where we cross the field boundary there is a large decaying tree stump that was said by Mr Davenport to be a Poplar but this does not tie in with any other boundary trees and looks more like ancient Ash. There is still the remnants of a ditch as confirmed by Mr Davenport. There is also a lot of rabbit damage to the lower trunks. 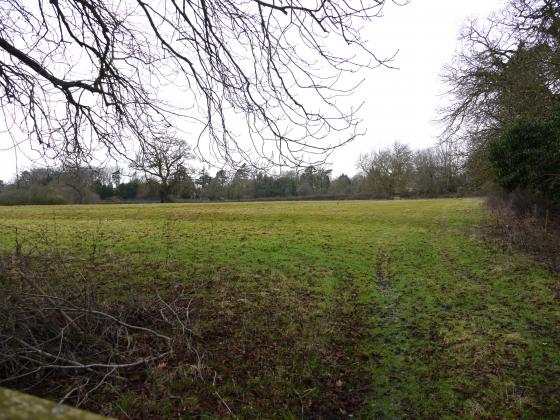 From Westfield Lane. Boundary hedgerow to the right with Site 265 Lawn Bottom. February 2015 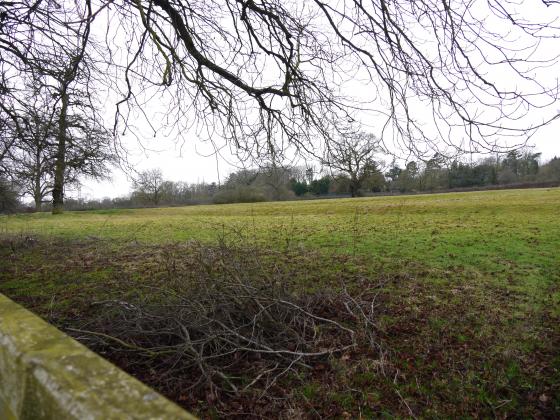 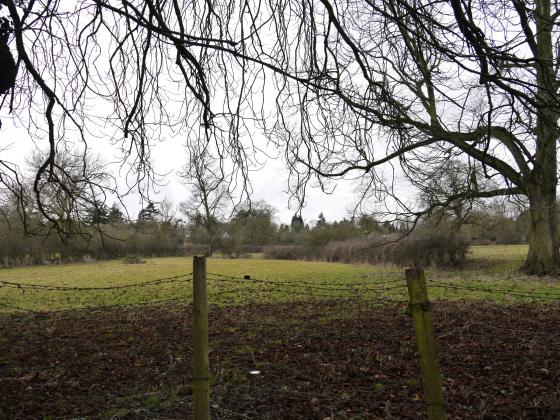 From Westfield Lane. Pond 46 enclosed by the central piece of hedgerow. February 2015 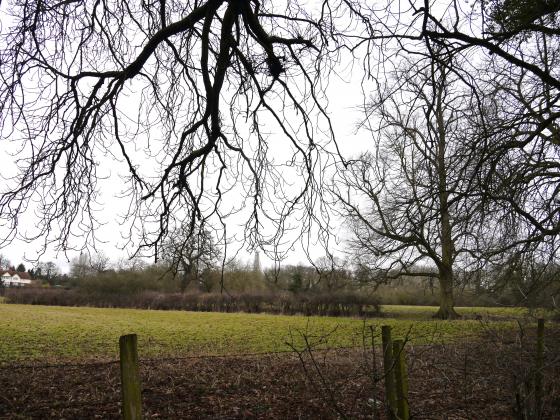 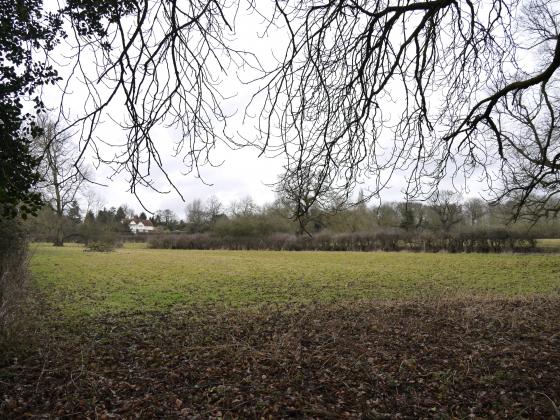 From Westfield Lane with Pond 46 enclosed by the central piece of hedgerow. The Ridgeway far left. February 2015