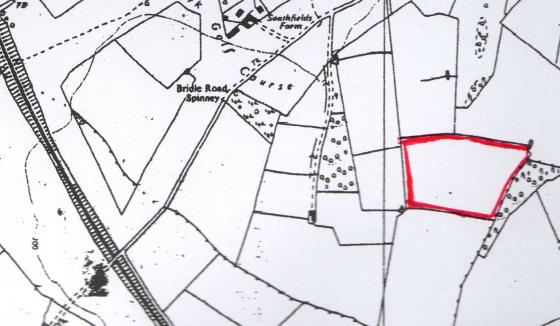 We visited this field to carry out the Ancient Boundary Survey as this is both the Ancient and current boundary of the parish. Broadnook Spinney runs the length of this field at the back of the boundary. However, it was interesting to go into the spinney and I found White and Purple Sweet Violets and Bluebells. There is a good shallow ditch along this boundary with mainly a double hedge.

A further visit was made to record the Ancient Parish, and current, Boundary. I have recorded three Boundary Ash Trees 526, 527 and 528 but they are not in a good state as are none of the boundary trees around these fields. There is an ancient Hawthorn Tree 529 with a girth of 2.3 metres where the boundary turns at a sharp angle.

I will return to this site to record the hedgerow trees on the other boundaries.

Further details of the Ancient Boundary can be found under Stints 24, 25 and 26 in the RAPS records 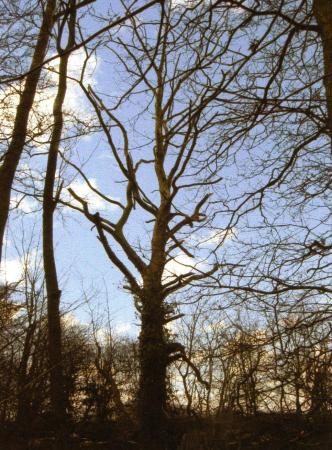 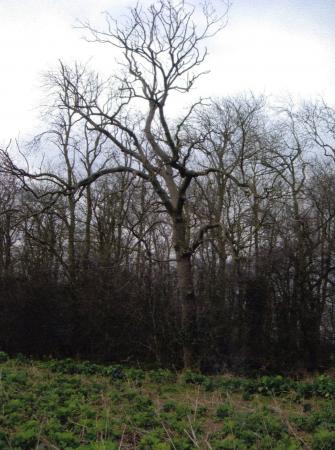 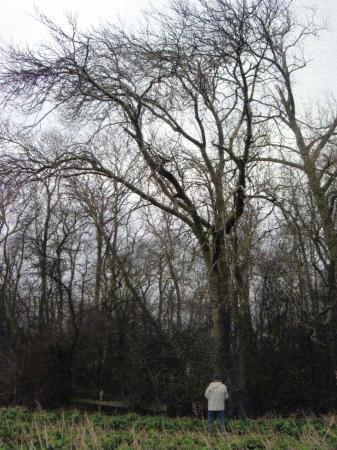 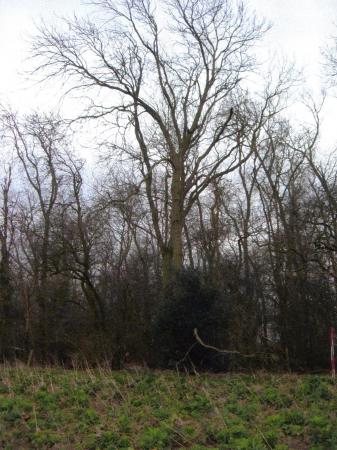 Site 203 Ancient Parish Boundary Hawthorn with a girth of 2.3m. This hawthorn actually extends just beyond the ancient and current boundary but still in Rothley Parish. An unusual extension of the ancient boundary hedgerow. March 2005 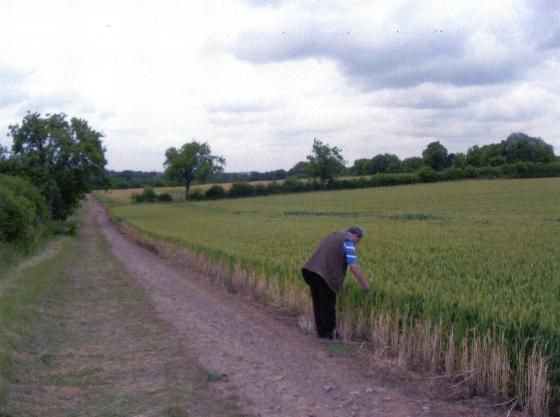 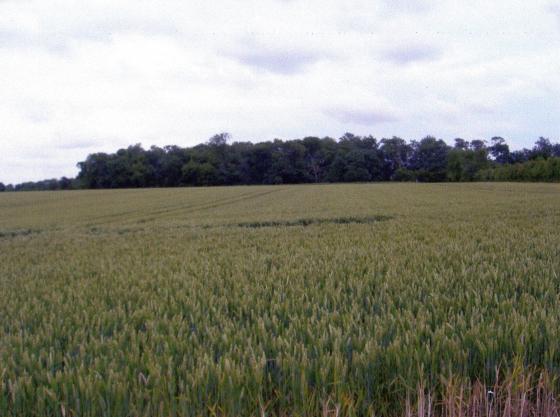 Location: Site accessed from the Bridle Road, over the Golf Course, over fields to the boundary

This stint starts just beyond the pond-like depression in Stint 23D. I had a word with Anthony Cooper about this and he said that it had been there is his living memory and felt that it was a pond due to the siting of the old hawthorns around it.

In the first part of this stint we still have a double hedge with hawthorn on the Wanlip side and thick blackthorn on the Rothley side. However, it is very interesting to note that the hawthorn has not been laid; they stand as individual trees but not of great height. This must have been because this part of the boundary also had woodland planted at the back of it, not open fields as in Stints 22 and 23. The woodland is the top of Broadnook Spinney, which is in Wanlip Parish, and narrow at this point. There are a lot of dead elms and also Ash Trees in this spinney, which appears not to have had any management for many years. It will look pretty with Red Campion, there are a few Bluebells but I was very pleased to see some Sweet Violets in flower.

There is still a shallow ditch running the length of this stint, about 40 individual hawthorns on the Wanlip side but much fewer on the Rothley side but when in leaf it would give the appearance of a continuous hedgerow.

The remaining part of the stint has the same hawthorn spacing and appearance on the Wanlip side with one Oak, Tree 523, and two Ash, Trees 524 and 525, planted as part of the boundary. When we reach 24D we start in a new field Site 203 First and Second South Wong and there is no double hedge, just the Wanlip hawthorns. However, there is a line of straw bales where the Rothley double hedge would have been, as cover for guns during the shoot. These bales may cover cut back hawthorn stumps but I will have to wait until we reach the end of the bales to see what happens.

The whole stint is the usual mixture of hawthorn, blackthorn, elder and dog rose but the blackthorn is not in evidence for the last 90 metres.

It will be interesting to compare a boundary backed by a spinney to one backed by open fields.

Location: Site accessed from the Bridle Road, over the Rothley Park Golf Course and over the fields up to the boundary.

Another dull day! This was an interesting stint as the large, ancient individual hawthorns on the Wanlip side suddenly stopped and changed to the Rothley side a few metres short of the end of 25C. Consulting the old map it was at this point where there would have been a hedgerow dividing First and Second Wong. On the Rothley side up to this point there is an absence of the double hedge and when we see the switch to the ancient hedgerow there is no definite row of trees on the Wanlip side although there is still a good ditch.

Broadnook Spinney still runs at the back of the hedgerow and I found lovely patches of White Sweet Violets as well as Purple Sweet Violets. In addition there were large spreads of narrow leaved Bluebells and masses of Red Campion.

Not so many species in this part of the boundary with hawthorn predominant, with ash, one small oak, elder and young sycamores that look fairly recent due to their size and positions, one species still to be identified. There is a large stand of Gooseberry in stint 25D.

Location: Site accessed from Bridle Road, over the Rothley Park Golf Course and over the fields up to the boundary.

The first 10 metres of this stint is the boundary of First and Second South Wong when it then meets Site 211 South Field (Baguleys). It then does a sharp turn where the spinney is at its widest before another turn taking it into a gentle elongated 'S' shape down to the old A6.

There is no sign of the Field Pond at the junction of Sites 203 and 211 and you wonder why it was here in the past unless there was another field boundary running over Site 211 to join up with the hedgerow still showing on the older maps that runs over Site 212, Church Wardens Land. It would then make sense to have a field pond here, as it would then serve the corners of three fields. There is also an old Hawthorn Tree 529 beyond where the boundary turns which would have been part of the possible boundary route mentioned near the pond site.

Due to bad weather we were not able to complete this stint until April 13th 2005.

We turned into Broadnook Spinney for the next 20 metres of Stint 26A and this proved to be quite a battle with the undergrowth. However, the ditch is still in evidence even though rather enclosed on both sides by the corner of the spinney. We still have old individual hawthorns on the Rothley side with dead Elms and half dead Ash trees on the Wanlip side.

The remainder of this stint was just as difficult to record due to the vegetation caused by totally unmanaged woodland. The Ash Trees are in an extremely poor state, many fallen and others half dead and leaning. The ground flora has a chance to survive as there is more light and there were Sweet Violets and Bluebells covering a large area together with lots of Red Campion and Herb Robert.

At the end of stint 26D the boundary changes direction again and we will continue our recording in Stint 27A from the Rothley side of the boundary.

This is a difficult part of the boundary to get an accurate date using the hedgerow species so this must be allowed for in the result of the count.