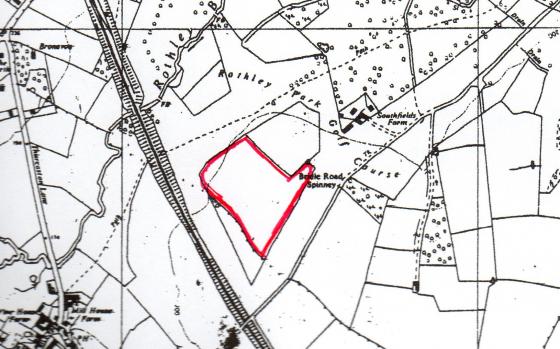 This field is surrounded by the Rothley Park Golf Course. The Rothley Ancient Ecclesiastical Parish Boundary (RAPS) runs through it and details are attached. 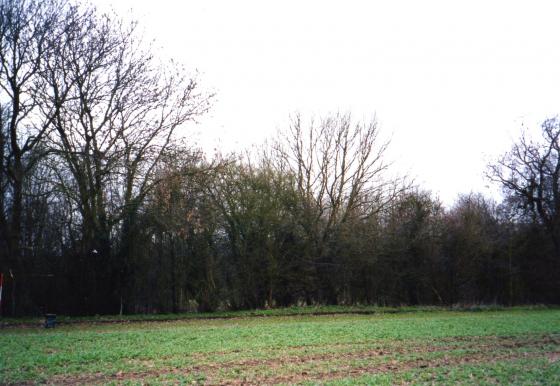 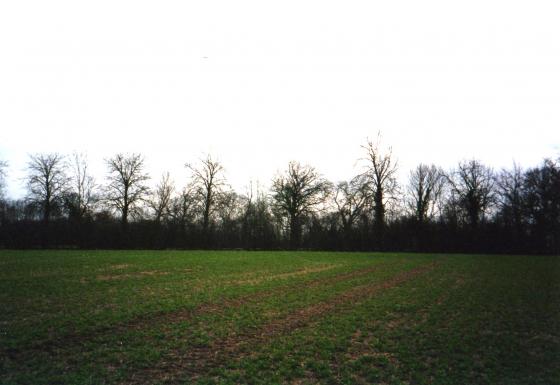 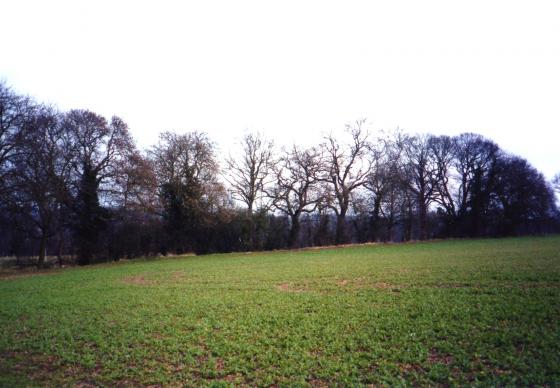 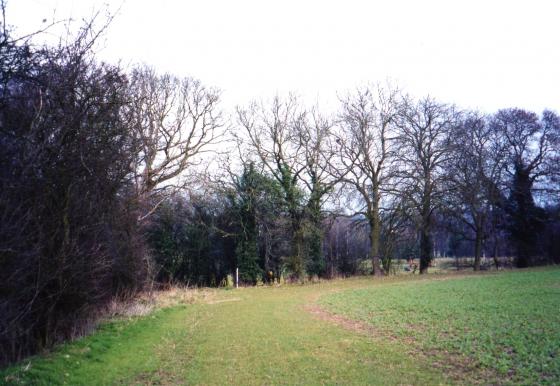 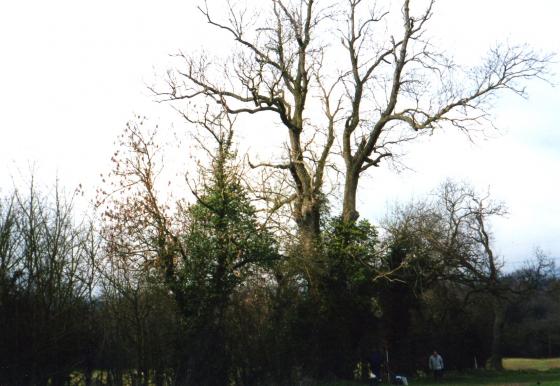 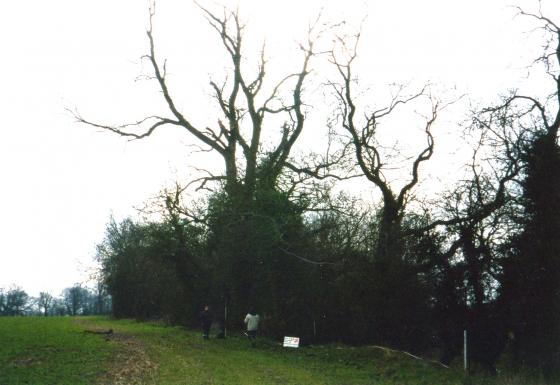 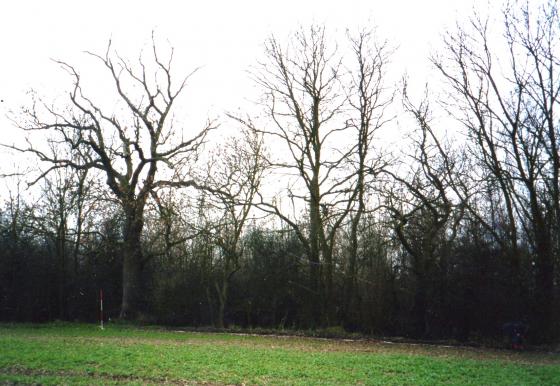 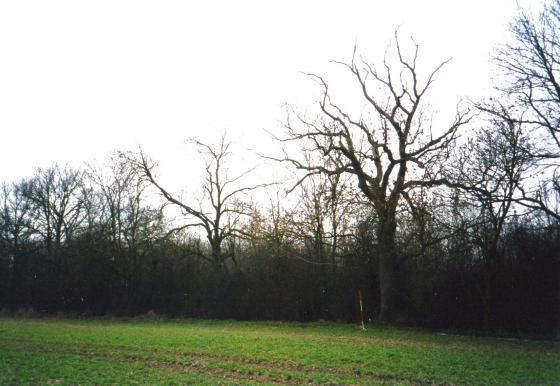 Site 199 Ancient Tree 238 on the right on the Rothley Ancient Parish Boundary. March 2004 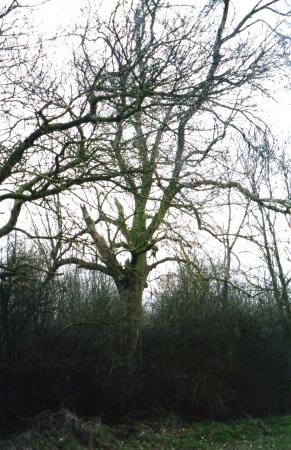 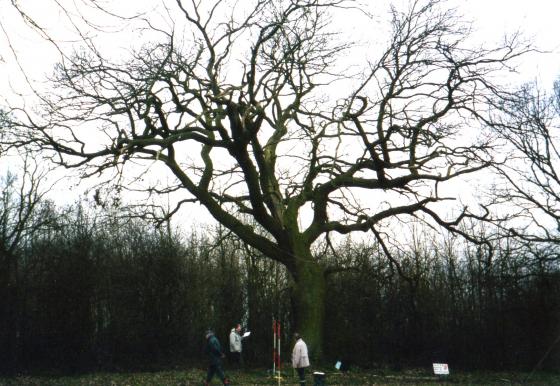 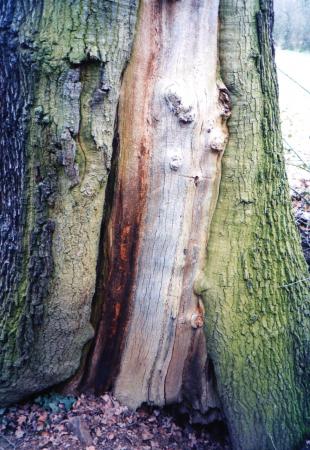 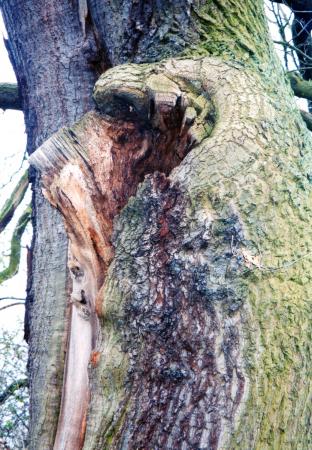 This morning we were met by Dave Holling who drove us to the starting point of Stint 12. Martin Brown, Manager of the Greens, joined us a little later, it is really good that he is interested in what we are doing and he does have background information to the site.

This stint begins with the Ash, Tree 233, on the edge of Fairway 15 and, at this point, the boundary runs along the field side of a spinney, not the Fairway side. There is also a very large granite stone next to the Ash Tree.

This part of the stint has a good ditch, which has broken down over the years as it has not been needed for drainage and therefore not maintained. The whole length of this stint has Bluebells growing on the far side of the ditch and they can easily spread as the back of this part of the boundary extends into the spinney planted by the Woodland Trust seven years ago. This spinney has not been maintained but, under the planting agreement, it will be taken over for management by the Golf Club in 2013 so I am sure that it will receive sympathetic attention after this time.

There are a further two boundary trees in this stint, both Ash, Trees 235 and 236, one of which qualifies as an Ancient Tree with a girth of 3.8 metres. However, boundary trees are historically important and therefore they are detailed in the survey.

This stint is interesting for the amount of Elm it contains. Huge numbers of Elms were lost in Rothley to Dutch Elm disease, especially in this part of the parish and here you can see young dead elm trees together with younger elms that are alive due to their size. This is typical of the life and death of young elms. There is only a small amount of hawthorn and the Oak trees have still to reach a size suitable for being called Boundary Trees.

When the spinney is managed by the Golf Club this hedgerow should get more light and perhaps the elm could become more substantial if maintained at a height for survival.

It was a cold day and a blizzard started to blow so that was the end of our morning's activity. Martin very kindly returned us to base where we arrived a bit wet but very pleased with this really interesting stint with more to come.

A lovely morning with Spring in the air and the song of the Skylark overhead.

The whole of this Stint is rather gappy and, as in Stint 12, it is backed by the Woodland Trust spinney. There are many species with old, thick trunks and twisted dead pieces on the ground. There are trees on both side of the continuing ditch and a lot of Elmre-growth. This is one of the best stints for species and in the first 30 metres we recorded Hawthorn, Elm, Elder, Blackthorn, Maple and Oak with Bluebells.

The next 30 metres was just as good and ended with an Ancient Ash, Tree 238, in the Natural History Survey and the start of a series of very large boulders.

The next 30 metres showed an interesting curve to the ditch, still with large boulders, and our first evidence of wild rose. It ended with an Ancient Ash, Tree 239, which has been recorded not because of its girth but as a Boundary Tree that is in rather a bad state.

The final 30 metres did show some evidence of ditch clearance, as there was the start of a bank on the far side at the end of the stint. We recorded a lovely Ancient Oak, Tree 240, with a girth of 4.3metres at the end of the 120 metres but this was very war torn possibly by a lightening strike as evidenced by the exposure of heartwood from the base to the height of the main trunk. However, it is a good site for birds as there are good holes for nesting.

This is the most interesting Stint so far due to the variety of species, the ditch, bluebells and large boulders. The age should average out at 500 years+.

The first 20 metres of this Stint was a continuation of Stint 13 with the same features but much more evidence of ditch clearance in the past shown by the bank on the far side of the ditch. There were two very big boulders at the end of this portion of the Stint. This part has gappy species with young ash and oak ending with a Horse Chestnut that is part of a line of field boundary trees alongside the field and fairway.

The next 61 metres runs over Fairway 14 where there is a dip in the ground showing where the ditch continues. The final 39 metres runs through a small copse but still showing the ditch and full of young dead elms which appear to be marked for clearance. It is difficult to define the boundary species in this part as it is mainly suckering elm. The end of the Stint comes out just 2 metres into the field on the other side of the Bridle Road between Rothley and Thurcaston. This last 2 metres has a corner with a cluster of young, dead elms with suckering elms on the boundary line mixed with elder. Terry informed us that there was a gate at the actual boundary point on the Bridle Road at the time of Enclosure.

This Stint will not reflect a true age as in Stint 13 due to modern changes but is a very good example of how an Ancient Boundary can be lost in history. It would have looked just the same as Stint 13 with its ditch and hedgerow. The land that is now Fairway14 was known as South Hornbuckle on the Rothley side of the boundary.

Our next part continues as a 'real' boundary with hedgerow and trees right up to where the Parishes of Rothley, Thurcaston and Wanlip meet.