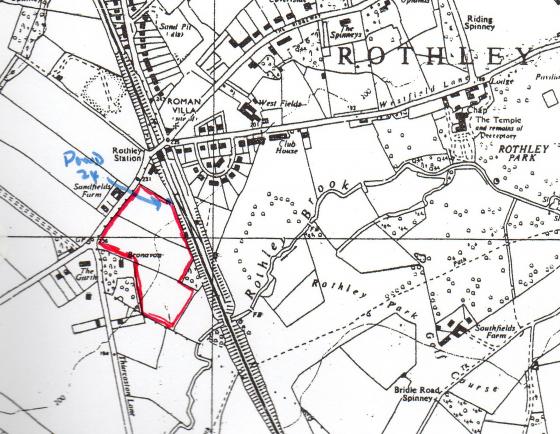 This site was once three fields now into one and used for arable farming. We recorded one of its boundaries as part of the Rothley Ancient Ecclesiastical Survey (RAPS) and did walk through it to gain access to our recording site.

Details of our recording are attached.

This site has a Pond 24 West Brown Hill Pond although this is just over the fence next to the railway line in the part used for horse grazing. 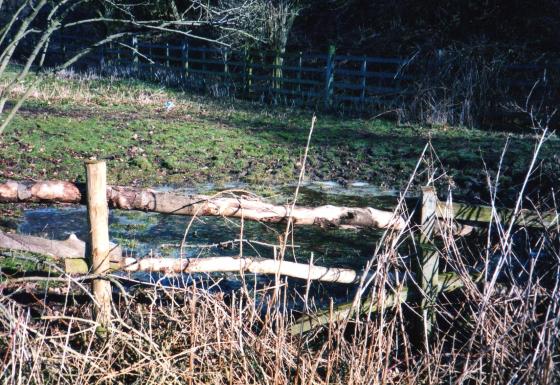 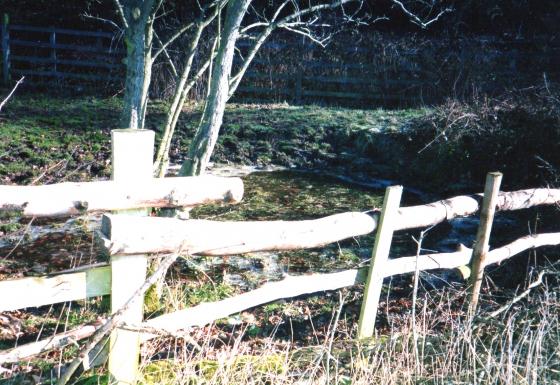 The first 30 metres of the boundary is the side boundary of Bronavon as in Stint 7. The perimeter link fencing continues to the end of the property boundary with the original boundary inside this. There is a mixture of holly, hawthorn and hazel as before in 7 C & D.

The next 30 metres is very overgrown with brambles so difficult to get close but easier towards the end part. There are Bluebells coming through along this part. There is a good ditch and quite a drop from the garden down to the paddock. It is not a continuous hedge but overgrown hawthorn with Holly and Ash, not ancient. There is an old Elder, rather dead looking, but it has old parkland railings growing through the trunk, totally encased. The next part of the Stint will be recorded by getting access from a field on Station Road for which I have permission from the Tenant Farmer, Mrs Wright.

This next part, Stints 8C & D, is a continuous piece of hedge, the first part mainly of Hawthorn that has not been laid and forming a single line along a good ditch. This becomes a double line on either side of the ditch with part looking laid but broken down and sparse in places. At the start of 8C there is a coppiced Oak with five trunks and a smaller one with three. There is Elder in places along this stretch and a few patches of unidentified Willow. There are Bluebells in places. The ditch in one part has been filled by horse manure from the adjoining paddock.

The whole of this stint is rather sparse hawthorn but it is interesting to see a good ditch and a double hedge in the latter part. There are no Ancient Trees in this hedgerow but I can see a good one not far away but not part of our Boundary Project.

The first 30 metres of this stint is a bit of a jungle with pieces of old laid hawthorn and large stands of elder, very unkempt. The ditch deteriorates mainly by being used to deposit horse manure in one place. Towards the end of this first part there is a flat access over the ditch into the next field, which is in Thurcaston Parish but still tenanted by Wrights Farm. Access has been granted down to the Gt. Central Line.

The remainder of the stint has a very good ditch on the Thurcaston side of the boundary, which is running with water emerging from another adjoining ditch. In the second 30 metre stint there is an Ash tree, which does not qualify as ancient, and a good amount of willow including one that is of good age but rather 'broken down'. There is a patch of bluebells and evidence of others further along. This remaining part of the boundary down to the Rothley Brook has good stands of willow and blackthorn together with hawthorn. The elder forms a line this side of the ditch but cannot be documented as a 'double hedge' as it is too young.

The end of the 30 metres is very interesting as it meets the Rothley Brook, which runs under a flat bridge built of blue brick in the pillars and metal structure for field access to Site 194. Although the boundary runs down the centre of the brook there is a lovely Common Alder Tree 228 growing on the further bank. It is interesting to see such a good-sized alder especially as it is set on an ancient boundary. (There are two other alders just further down from this one, one of which is recorded in Stint 10).