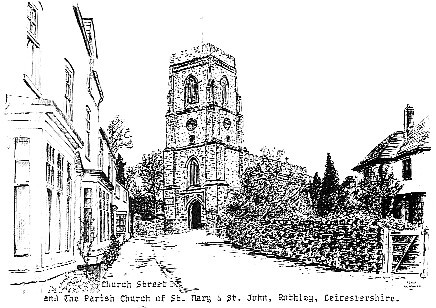 On Friday, February 5th 1954, there was a performance of Handel's Oratorio The "Messiah" in Rothley Parish Church and sung by the combined Choirs of Rothley and District. The Tenor soloist for that performance was Robert (Bob) Lovett of Town Green Street, Rothley.
50 years since that performance here are Bob's memories of his early days as a chorister in the Rothley Church Choir.

My introduction into the choir came via my cousin, Ray Chamberlain, he was a lad of two or three years older than I, but his reply of his choral experiences fascinated me and my interest grew. Initially he informed me that I was too young to become a member and that I would have to wait until I was at least seven years of age.
In September 1935 I pestered him again, having reached the good old mature age of seven in June of that year. Well, he was quite prepared to introduce me to the choirmaster but added that it was necessary for me to obtain my parents' consent. My parents were undoubtedly most understanding but my father, a stickler for discipline and allegiance, strongly informed me that I was to go along with Ray to be introduced and, if accepted, to fully realise that I must make my decision and if that should be in the affirmative then in the choir I was and with no thought later of backing out.

With great trepidation I went along to a practice with my cousin and was extensively interviewed, questioned and auditioned by what appeared to me to be a very stern and pedantic character of an organist. This was Mr Aubrey Bland.
I like to think that my enthusiasm and vocal performance (such as it was in those very early days) pleased him, for at the end of the gruelling session, I was informed that I could enter the organisation as a probationer which was a necessity for all newcomers.
There are many who fail to appreciate that at this time Rothley Parish Church Choir was of a very high standard with a training that was very thorough and strict. Music was not included in the school curiculum and a choir therefore gave the opportunity to comprehensively learn the theory and technicalities of the subject.

Needless to say, in order for this standard to be achieved, practice and training was very extensive. Every Wednesday junior members of the choir, boys only, were permitted to leave school early in order to be at the church for start of practice at 4pm and finishing at 5pm. The next session was on a Friday evening when the boys started punctually at 7pm with the men arriving at 8pm for an hour of practice as a full choir. The boys would leave at 9pm leaving the men to practice until 9.45. A prompt finish was always achieved as a much needed pint could only be bought until 10pm, the closing time in those days.
The weeks practice was not over, even then. The Matins service on Sunday started at 11am but the choir had to report at 10.30am for a quick "run through" of certain pieces of music before the "battle began"! After the service there would be a reporting back session for any faults to be put right. More thirsty work requiring a quenching pint at the "Woodies". 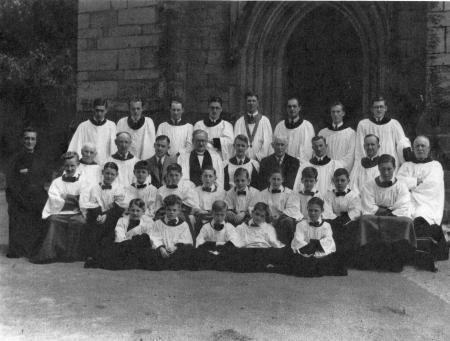 It can be safely said that in those far off days the Rothley Parish Church Choir was equally on a par with the choirs in the country's cathedrals and I would stress that this is no idle boast. Sunday worship always consisted of fully choral services with special musical settings of the canticals and always included an anthem. On one Sunday in each month there would be a sung eucharist and every Good Friday there would be an evening performance of Stainer's "The Crucifixion" or "The Passion of Christ" by Somerville.

So much for the moment of the general situation. What was happening "behind the scenes"? At that period of the choir's history no chorister was permitted to be "in the choir proper" until he had undergone at least six months as a probationer. This involved his attending services clad in cassock but no surplice and sitting virtually out of sight just beyond the choir stalls. When this period as a "novice" was completed and the ultimate test and assessment passed he would be made into a "full member". This consisted of not merely assembling with the remainder of the choir at the next service, but with other approved and sanctioned boy choristers, would undergo a special service with the Bishop presiding to welcome him into the full body of the choir and "crowning him" by placing his surplice over his head as the boy knelt. Thus he became "one of the boys"-or did he? Well, that is perhaps what the general assembly probably thought but as far as the lads were concerned-no way!

The true and confirmatory completion of full membership lay in the hands of the lads themselves. Close by the north porch entrance to the church is a set of four yew trees which, in the thirties and forties, formed a compact square about five feet high. The new initiate was taken by four of the senior boys, one at each limb, and swung into the top of these trees. Alas, that was not all. One must be aware that at that time the choir boys uniform not only consisted of a cassock and surplice but also a bow with Eton type stiff collar. Full details of the next action, when in the top of the tree, can be obtained from the Editor who leaves it all to the imagination. However, this action completed, full membership was achieved-those were the days!

Returning to my personal involvement, membership of this most competent and professional body presented so many opportunities for the furthering of musical education. In those days, with no chance to pursue the love of music at school, I have my membership of the church choir to thank for the musical and singing training I received at that time. Whilst membership was a matter of voluntary service, it did have a few "perks". Attendance at weddings and funerals presented the opportunity of improving my financial status by the princely sum of half-a-crown, a lot of money in those days. It is interesting to note that the men were paid ten shillings which, by todays standards, seems meagre but for those in paid work it was more lucrative to sing at a wedding and take a cut in wages for the lost time.

With the passage of time and progress I eventually found myself top boy and soloist. This was a golden time, giving me the opportunity of "showing off" my choral abilities and being invited to participate in concerts of secular and other music beyond the confines of my village.
There comes a time when the voice breaks and life changes. I well remember my last public appearance at Quorn where I sang the Mendelssohn songs "Hear My Prayer" and "Oh! For The Wings Of A Dove" at the wedding of two of my Grammar School teachers. 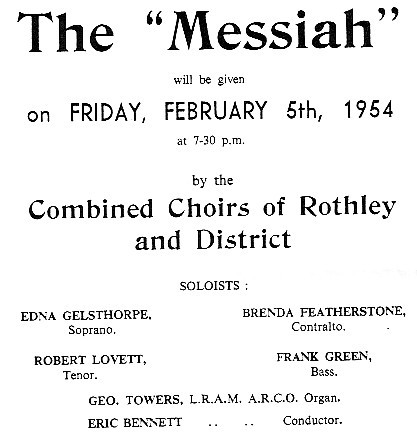 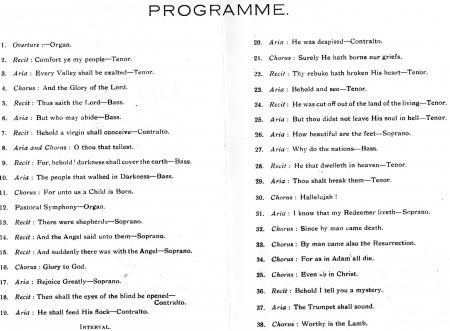 In spite of the advice to "have a break" whilst my voice settled I was so afraid that if I once did interrupt my vocal activities I may not return to them. I therefore stayed on as a tenor and I am sure, even now, the the decision was right for me as I continued to experience an unbounded involvement in choral and solo performances. I well remember the first, and to my knowledge, the only performance of Handel's "Messiah" at Rothley Parish Church on February 5th 1954. I still have the programme and the front page is shown above.

Undoubtedly the most wonderful experience amidst all of this was, when in the Church Youth Club in 1943 helping to prepare a concert in aid of "Parcels for the Troops", I met Joan Wright who was introduced as a most talented and competent soprano. We combined to perform an "Anne Zeigler and Webster Booth" singing act and Joan later became my wife. Together we have spent the happiest of times singing as a duo in choral and operatic performances and fully enjoying our love of music.

I hope that you have enjoyed reading about the involvement and outcome of my having been a member of the choir of the Rothley Parish Church of St Mary & St John back in the "thirties".
Bob Lovett

Please click on the following link to learn more about the Rothley Youth Club in 1945/6:-