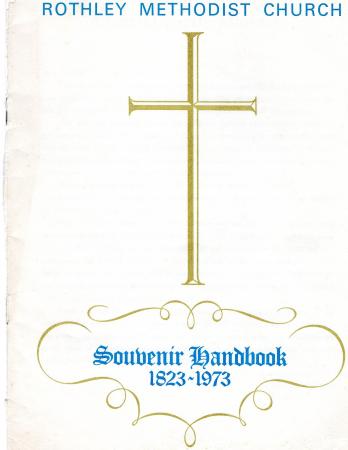 A Letter from the Minister

The handbook starts with a letter from the Minister Peter Watkinson where he thanks Bert Parkin for all the research undertaken to outline 150 years of Rothley Methodism.

A Brief History of Rothley Methodism

In the latter half of the 18th Century John Wesley made many visits to Leicestershire, travelling often between Loughborough and Leicester or Markfield, preaching frequently in houses in Mountsorrel and though there is no record of any visit to Rothley he obviously soon inspired societies to thrive, followed by equally inspired camp meetings of the Primitive Methodists started in 1811; many records of these being found in the minutes of the Loughborough circuit of the Primitive Methodist Church from 1832 onwards.

Meanwhile progress was being made by the Wesleyan Methodists, the first membership roll for Rothley appeared in 1813 when the following 13 members were recorded;
Thomas Smith, Ann Smith, Mary Prior, Margaret Woodcock, Thomas Johnson, Jane Langham, C. Mitchell, Jane Mitchell, Mary Woolaston, H. Smith, William Johnson, Dinah Lewin, Elizabeth Brewin.
The membership rose to 20 by 1822 and doubled to 26 by June 1823. This was presumably the time of the building of the chapel. In 1827/8 the Loughborough Wesleyan plan covered 23 churches stretching from Rothley (often spelt Roadley) to Diseworth. Services at Rothley were held at 6.0 p.m. and changes in other ways do not appear to have affected this in 150 years!!!

The Primitive Methodists, as one plan put it 'also known by the name of Ranters' had, during this period, 37 churches on their Loughborough plan stretching from Diseworth in the north to Countesthorpe in the south, Markfield in the west and Croxton in the east so rapid was the cover of the County that they made. While many societies continued to flourish until late in the Century many similar ones started to ebb and soon some causes faced difficulties as this extract from the Primitive Methodist magazine for 1857 shows:-

'ROTHLEY-At this place our Society had been in a very low state; our congregation was very small, and the chapel debt, amounting to £197 pressed heavily. It was, therefore, determined to lower the debt to £37. The case was presented to the General Chapel fund Committee who kindly promised £10. We have succeeded, by a general canvas of the village and neighbourhood, and by the assistance of our members in the circuit, in raising the remainder. Since then our congregation has increased fourfold; sinners have been converted, and the Society increased. Praise the Lord!!!'

In parallel with Loughborough, Leicester Wesleyan Methodism grew rapidly up to 1840 and while the circuit based on Millstone Lane, which moved to Bishop Street in 1816, grew, it became necessary by 1839 to reorganise the circuits. many of the causes in the Bishop Street circuit in the north east were transferred to a new circuit based on Melton Mowbray. In these changes Rothley found itself in the Leicester circuit which had been narrowed to Bishop Street, Millstone Lane, Sanvey Gate, Sileby, Syston, Thurmaston, Rearsby, Thurcaston, Belgrave, Glen, Blaby, Stanton, Markfield, Thornton, Groby, Anstey, Glenfield, Knighton, Wigston, Barkby, Humberstone, Rothley, Desford. After nearly 150 years many of these are still thriving causes while some have inevitably had to close or amalgamate.

As far as Rothley was concerned the causes continued in much the same vein for the next hundred years though at Howe Lane during the first world war need was found for extension and a fund was set up to build the entrance as we knew it before the recent extensions were carried out and over £160 passed through the accounts. Similarly for Sunday School purposes the Primitive Methodists at Mountsorrel Lane found the need for extension and a great effort was launched for the building of the Sunday School as was known up until the amalgamation of the two societies in 1964. Eventually the Mountsorrel Lane premises were used entirely for Sunday School and weeknight activities until their eventual closure in 1969.

During this century of work and witness, many changes were seen in the oversight of the two societies; the Primitive Methodists becoming joined with the Anstey circuit for some time, while the Wesleyans joined a circuit based on the Saxby Street Church and for some time came under the pastoral charge of the minister at Sileby (how history can repeat itself!). Saxby Street was unfortunately bombed during the second world war and that society re-formed after the war and established itself eventually in Ethel Road at Mayflower. Continued changes brought about the amalgamation of circuits yet again in the early 1950's reducing them to four geographical areas plus the Central Mission as Bishop Street had become (including Humberstone Road, later to be closed and become a cardinal telephone exchange). The Rothley churches both found themselves in the North circuit and later under the pastoral charge of the same minister. In common with many societies throughout Methodism with two societies in one village, they found the need for amalgamation which came to fruition in 1964. It is perhaps interesting to note that while the two societies remained fairly static in membership for over 100 years (for in 1956 Mountsorrel Lane had 27 members and Howe Lane 21) since amalgamation this has risen steadily.

At the amalgamation the membership was 48 and with the influx of two new families this rose quickly to 52. At this time too there was recognition of the need for new more modern premises for worship and the other needs of a larger society working together and efforts were started on a building fund. The Trustees were on the look out for a suitable site but nothing was forthcoming and eventually sights were lowered. With deterioration of the state of the Mountsorrel Lane premises becoming more acute it was determined instead to apply for permission to build a new hall at the rear of the existing Church in Howe Lane. This was granted after a long delay and enthusiasm then grew rapidly, the hall being opened in 1969 by Mrs. Evelyn Fowkes and Mr. Alfred B. Chester, some three years earlier than had originally been anticipated, at a cost of £6,266.

This venture opened the way to many new and certainly for some, quite different experiences in Christian fellowship and worship. For example, after lengthy consideration the leaders had previously decided to introduce Morning Worship at 9.30 a.m. starting as a family, with the young people leaving for their classes part way through the service and this was brought into practice immediately following the opening of the new hall. This proved to be very successful under the circumstances and the practice is still being continued. A Young Wives group was started and this too continues to flourish though its scope has been extended to cater for all ladies connected with the Church and is now known as the Ladies Circle. Youth work too has been increased in scope by the introduction of a Youth Club and a Youth Choir, one effect being the attraction of more young people to worship particularly in the evenings. The 'Fellowship' meeting has, over the years had many ups and downs but again is flourishing following now a pattern of deepening Christian faith and experience coupled with new forms of outreach. Contact has been made with the Kathleen Rutland Home for the Blind and various forms of service offered to them. The Cheshire Homes are being contacted offering help for their new new venture at Roecliffe Manor.

These new activities have given the leaders great encouragement and this is reflected in the membership which now stands at 80. It should be borne in mind however that this includes the transfer in of several new Methodist families to Rothley recently.

Happy relationships exist today between ourselves and the Anglicans and Baptists in Rothley and we also seek to play our part to the full within the Leicester North Methodist circuit. We look to the future with the realisation that a challenge awaits us as we seek to work and witness for our Lord in the days that lie before us. Our prayer is that the Holy Spirit will strengthen us for the task and give us a humble assurance born of faith in Christ who alone is our hope and through whom alone we can be confident for all that lies ahead. 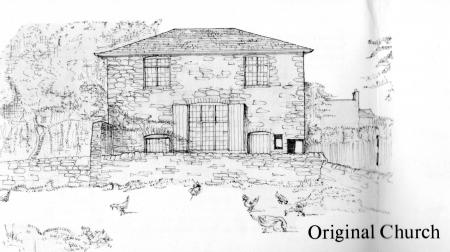 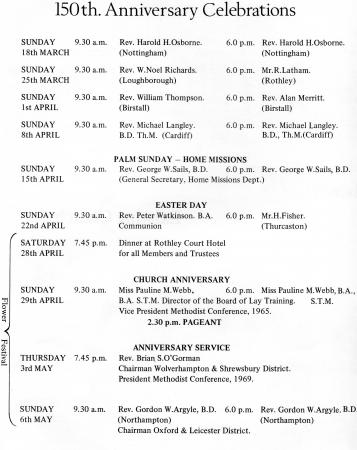 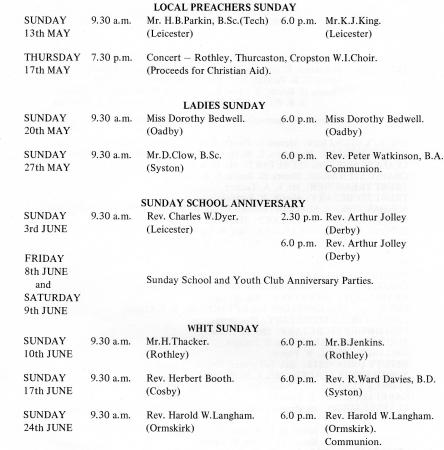 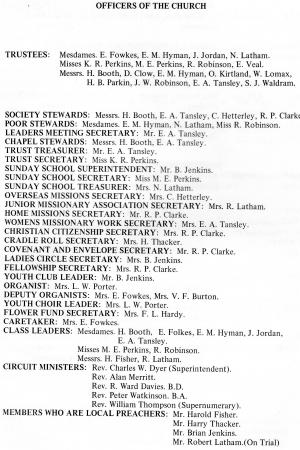 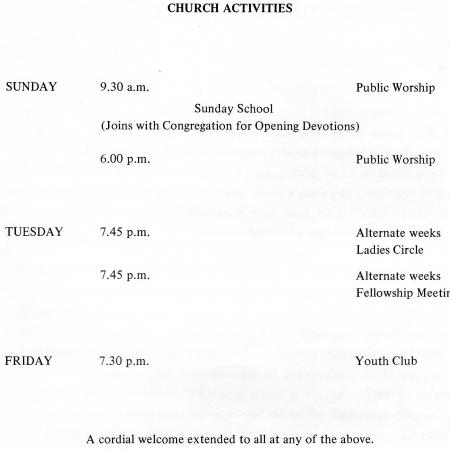 To return to the Rothley Wesleyan Methodist Chapel please click on the following link: