The information given here is the result of research carried out by 10 local students attending a joint WEA/Leicester University evening class held in Rothley in 1989/90.
Mike Smith, the WEA Birstall and Rothley Branch Secretary was the driving force behind its publication in 1994. Sadly, Mike died in 2003 and this Rothley website feature is dedicated to him.

Most of the work is based on the 1851 census but, to give a fuller picture of Rothley in 1851, a number of other sources were used:parish registers,wills, Land Tax assessments,manorial court records and vestry minutes. It was then possible to discover more about certain individuals living in Rothley in 1851 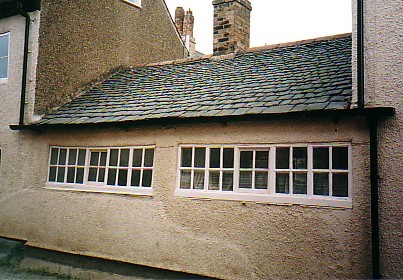 In 1851 Rothley is described as a large and pleasant village with many neat, scattered houses; it contained about 1200 acres of fertile land. The parish included the township of Mountsorrel South End and the chapelries of Keyham, Wartnaby and Wycomb-cum-Chadwell but these were excluded from our research. The Barrow on Soar Union Workhouse was situated in the parish and this was covered separately in our publication.
The above picture shows a stockinger's workshop still to be seen in Rothley.

Until 1831 the inhabitants of Rothley Temple were included in the total parish but from 1841 they were recorded separately.
The 1851 census shows a population of 985 in Rothley and 67 in Rothley Temple. These figures were almost equally split into males and females but age groups splits were interesting. It was primarily a young population with 34.2% aged 15 and under and 44.0% aged 20 or under.

It was interesting to find that 42.2% of Rothley's inhabitants in 1851 were born outside the parish. As an example, William Acworth came from Chatham in Kent, Margaret Acworth came from Govan in Lanarkshire and Anna the Governess from Dudley in Staffordshire.

Mobility depended on whether a village was 'open' or 'closed'. A 'closed' village was one where the property was in the hands of a very few people who could control development and restrict people coming in who might become dependent on poor relief. Rothley, being partly an industrial village, would attract workers from elsewhere and conforms to the pattern of an 'open' village. 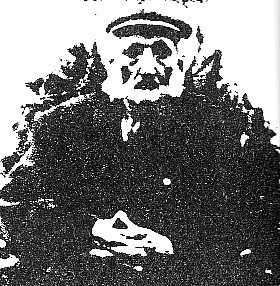 Out of the 975 inhabitants in Rothley, 490 had an identifiable occupation and a total of 55 different ones were recorded. There were even two Chelsea Pensioners.
Agricultural Labourers and Framework Knitters made up the bulk of the workforce with 84 of the former and 132 of the latter. Benjamin Armstrong, shown above, is claimed to be the last working Framework Knitter in Rothley. He lived from 1813-1904 and in 1851 he lived and worked in his 'shed' in Bacon Hole with his wife, Ann, and his sons Robert and William. Like the Norths and the Baguleys the Armstrong family had long been stocking frame knitters in the village.
The list of occupations makes interesting reading:
Agricultural labourer-84
Apothecary-2
Baker-2
Bonnet maker/milliner-3
Blacksmith-2
Boatswain (retired)-1
Boot binder-1
Bricklayer-3
Brickmaker-3
Butcher-6
Carpenter-7
Charwoman-5
Chemist and druggist-1
Clergyman-2
Commercial traveller-1
Cordwainer/shoemaker-8
Cow keeper-1
Dentist-1
Draper-3
Dressmaker-12
Elastic web manufacturer-1
Errand boy-5
Farmer-15
Farm servant-9
Framework knitter-132
Gardener-2
Governess-1
Grazier-7
Grocer-2
Groom-1
Harness maker-3
Hosier-2
Housekeeper-9
Industrial labourer (quarry, road etc) 13
Ironmonger-1
Lace runner-2
Licensed brewer/victualler-3
Needleworker-4
Nurse-3
Parish clerk-1
Quarryman-2
Seamer-32
Seamster/seamstress-3
Servant-40
Stone miner-1
Tailor-10
Teacher-7
Warehouseman-1
Wheelwright-5
Winder-16
Workhouse master-1
Worsted spinner-1

There were also some dual occupations:
Licensed victualler and framesmith-1
Butcher and beerhouse keeper-1
Farmer and maltster-1
Grazier and pig jobber-1
Blacksmith and veterinary surgeon-1
Wheelwright and beer retailer-1
Wheelwright and blacksmith-1
Framework knitter and shopkeeper-1

THE BARROW ON SOAR UNION WORKHOUSE

Until 1834 responsibility for the relief of poverty rested with the parish but, for various reasons, this system began to break down by the beginning of the 19th century and in 1834 the Poor Law Amendment Act was passed. It divided England and Wales into unions for poor relief purposes; each union contained a number of adjacent parishes which elected one or more unpaid guardians of the poor and raised the finances necessary to relieve the poor through the poor rates. Many villagers could not pay their poor rate in times of bad harvest or trade depression and were excused payment by the magistrate. A list of those excused the poor rate is detailed in the publication.
Rothley was in the Barrow on Soar Union and the Union Workhouse was situated within the parish. The guardians of the poor bought just over an acre of land in 1848, the site was on Union Lane, Mountsorrel, now called Linkfield Road, where a hospital stood until it was demolished in 1994.
At the time the census was taken there were 76 inhabitants, 54 men and 22 women and the oldest residents were aged 85. Only 2 of the inhabitants were Rothley born so the pattern of birthplace was very different from the village as a whole. Only one inhabitant had his occupation recorded: Isaac Preston, born in Rothley, was a framework knitter.
The following parishes were in the Barrow on Soar Poor Law Union:
Anstey-Barkby-Barkby Thorpe-Barrow on Soar-Beeby-Belgrave-Birstall-Cossington-Cropston-Mountsorrel-Newtown Linford-Queniborough-Quorn-Ratcliffe on the Wreake-Rearsby-Rothley-Seagrave-Sileby-South Croxton-Swithland-Syston-Thrussington-Thurcaston-Thurmaston-Ulverscroft-Walton on the Wolds-Wanlip-Woodhouse.

ROTHLEY PARISH REGISTERS
Registers of baptisms, marriages and burials were studied to see how many people listed on the census could be identified in the parish registers. However, it proved extremely difficult to link baptisms, marriages and deaths recorded in the registers to those listed in the census and, where the name was a common one, it was impossible to be certain that the right person had been identified. It was therefore decided not to include the results in the publication.
Although there were both Baptist and Methodist Chapels in Rothley by 1851 no relevant records of either survive. There is no reason to suppose that nonconformity was any less important in Rothley than in the rest of Leicestershire and the fact that it was an 'open' village strengthens the possibility that many of those recorded on the census were nonconformist. As a result of the imbalance of records from the Anglican and nonconformist churches it would also be misleading to draw any significant conclusions only from the Church of England.

ROTHLEY WILLS
As Rothley was a Peculiar (exempt from the jurisdiction of the diocese) its wills were stored in a separate series until 1858 when the method of proving wills changed and there is one series for the whole county.
From the 48 wills studied it was possible to learn about family relationships and other information about the testator; several of the families were interlinked and witnesses give clues to relationships.
The wills of the following residents were studied and further information about them can be found in the publication:
Elizabeth Lovett
Ann Pagett
Elias Woodcock
Elizabeth Hall
Thomas Armstrong the elder
John Needham
Jean Babington
Ann Lea
Mary Hickling
William North
Mary Lea
John Hetterley
William Barsby
George Sewell
Dawson Fowkes
Fanny Willcox
William Thomas Willcox
George Fowkes
William Boulter
John Spooner Pagett
John George Oldershaw
Catherine Willcox
John Dear
Dawson Fowkes

OTHER SOURCES OF INFORMATION:
COURT BOOKS.
The manor was an area of land, usually including a house, whose origins can be traced back to the Norman conquest. The land was rented out by the Lord of the Manor and its cultivation was regulated by the manorial court. Court rolls and books record the transfer of land-admission and surrender-and include such items as fines for minor infringements of the regulations.
Rothley has a good series of court rolls and books and a number of people found in the 1851 census appear in the records.
LAND TAX ASSESSMENTS.
Land Tax was introduced into England and Wales in 1697/8; it was applied to each county and responsibility for distributing the quota among the parishes lay with the county administration. The tax was levied on real estate and property and was also a form of income tax on salaries from certain public offices and tithes; it was initially set at 4/- (20p) in the pound but varied until 1798 between 1/- (5p) and 4/-, being fixed at the latter sum in 1776.
There has been considerable debate about the reliability and value of Land Tax returns but as a 'census of owners and occupiers' they are an invaluable source for the study of a rural parish.
A full list of proprietors and occupiers is given in the publication.
VESTRY MINUTES
The vestry was the meeting of all the inhabitants of a parish. The vestry appointed the parish officers and passed their accounts; in theory it could not appoint the overseers of the poor and the constable but often did. It also controlled the poor rate and the church rate.
Vestry minutes for Rothley survive from 1843-1892; the years 1846-1853 were studied. Most of the proceedings involved selecting men to serve as churchwardens, constable, overseers of the poor, assistant overseer and surveyors of the highway. Where it was possible to identify those men elected to positions of authority in the parish a very definite pattern emerges: most of them had middle class occupations and farmers were the most numerous group.
The other recurrent item concerned those excused payment of the poor rate, many of whom appeared regularly. As with the parish officers it has been possible to identify most of those listed and, without exception, they were in trades subject to periodic depression. The majority were framework knitters, a trade which had experienced severe problems in the 1830's and 1840's and was only just beginning to recover by 1851. Other common entries are for agricultural and quarry labourers.

The detailed research undertaken on Rothley, based on the 1851 census, gives a graphic picture of a typical 'open' village at one point in time.
There will always be a number of unanswered questions because of the lack of adequate documentation but the results found are very informative.
The amount of detail in the publication and the detailed lists of names will no doubt be of great interest to present day inhabitants of Rothley, especially those who can trace their ancestry back to 1851.
There are lists of names for the following areas of research:
Inhabitants of the Barrow on Soar Union Workhouse.
Rothley Wills 1830-1868.
Surnames recorded on the 1851 census.
Proprietors and occupiers recorded in the 1832 Land Tax assessment.
Parish Officers 1850-1852.
Names of excused poor rates 1846-1853

The publication "ROTHLEY IN 1851" is available for reference in Rothley Library in the Local Studies section.

With thanks to the Birstall and Rothley Branch of the Workers' Educational Association and the students who spent many hours researching hand written census forms and documents.