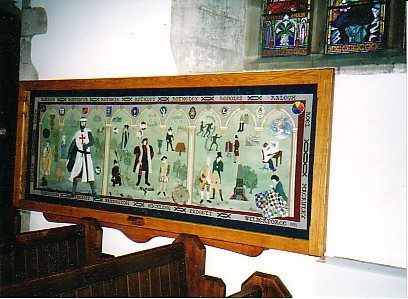 The story of Rothley sewn into a tapestry in 1999 and displayed in the Parish Church.

The tapestry was completed in 1999 by members of the Bradgate Sewing Circle, with historical information by the late Rodney Offley.

Capital letters are used in this text to denote characters and features to be seen in the tapestry.

The green ground and the blue stream of the Tapestry reflects the Domesday name of Rothley RODOLEI, 'a clearing in the woods by a stream.'
High status ROMANS settled in the area and the SAXON CROSS in the churchyard is evidence of continuing Christian British settlement after the Romans. The Domesday Book of 1086 records there being a priest in the village, part of a manor under the control of a Norman King. The NORMAN LADY worshipped in the original early NORMAN CHURCH , which retains the classic tub-shaped NORMAN FONT.

In 1231 the Manor of Rothley was given to the Templars, the military monastic order formed to safeguard the pilgrimage routes to Jerusalem.
The TEMPLAR KNIGHTS wore the red cross and had the emblem of the TWO KNIGHTS ON ONE HORSE to show their poverty.

The order built a Preceptory and Chapel as ROTHLEY TEMPLE, now known as the Rothley Court Hotel.
When the Pope supressed the Templars in the 14th century the Manor was given to the charge of the Knights of St. John of Jerusalem, the Hospitallers, whose EMBLEM features their beginning in the period of the Crusades.
The Hospitallers continued the development of the Manor and Soke of Rothley as an agricultural community which provided a rich source of income to support the work of the Order.

In 1405, the Vicar of Rothley, RICHARD KILHAM, was elected Prior of LEICESTER ABBEY and in 1520 notable Rothley citizen ROBERT VINCENT was the Ranger in charge of the DEER kept in the park at Bradgate

In 1534 Rothley landowner WILLIAM KINGSTON was given the SEAL OF OFFICE as Constable of the TOWER OF LONDON during which period Henry VIII's wife ANNE BOLEYN was beheaded. While at Leicester Abbey CARDINAL WOLSEY fell mortally ill and died in William Kingston's arms. After the Manor of Rothley was confiscated by the King at the Reformation it was eventually purchased by THOMAS BABINGTON in 1565, son of Humphrey, last of the local Hospitaller Knights.

The Lords of the Manor exercised control of the use and transfer of land within the Manor and Soke and drew some income from the produce of the MILLSTONES in both the Wind and Water Mills. The first Village School was created out of TWO COTTAGES in Town Green Street by the philanthropy of BARTHOLEMEW HICKLING for FOURTEEN BOYS in 1683. He endowed the annual prize of a HOLY BIBLE for the child who best performed a reading from the Gospels.

Between each arch are featured the emblems of organisations associated with the Village. From left to right the Cross of the Hospitallers, the Mothers' Union, Rothley School, Rolls Royce, who had a turbine blade factory where Whatton Oaks is now, the Scouts, the Women's Institute, The Royal British Legion, Rothley Lions, the new Great Central Railway Company and the Bradgate Sewing Circle. 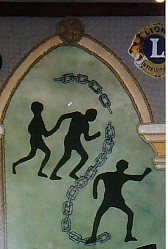 The Babington family held the Manor for almost 300 years until the death of Thomas Babington in 1837. Thomas went to St. John's College, Cambridge, at the same time as WILLIAM WILBERFORCE who together later were to work very closely as members of Parliament in the campaign to halt the SLAVE TRADE and for the eventual emancipation of the slaves.

Indeed, the MP Thomas Babington operated as the unofficial parliamentary private secretary to Wilberforce for several years. In 1800 his nephew THOMAS BABINGTON MACAULAY was born at Rothley Temple, later to become Lord Macaulay, the man of letters and the author of the definitive 'Whig' History of England.

In the early Victorian period many Rothley people earned their living at home making hosiery as FRAMEWORK KNITTERS. Honoured on the WAR MEMORIAL on Cross Green are the Rothley men who lost their lives in the two world wars, the number of poppies commemorating each name engraved on the stone. Rothley's development proceeded apace after ROTHLEY STATION was opened in 1901.

The view of OUR WORLD seen from manned space vehicles returning from the moon, the world we must look after for future generations, as shown by the CHILD AT THE COMPUTER, looking forward to the future with the new technology they will grow up with. 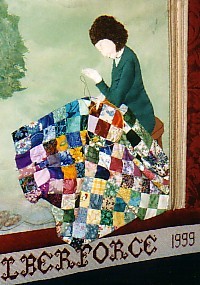 Busily stitching, a representative member of the BRADGATE SEWING CIRCLE looks back across the tapestry of their work.

For information about how the wallhanging was made please click on the following link: