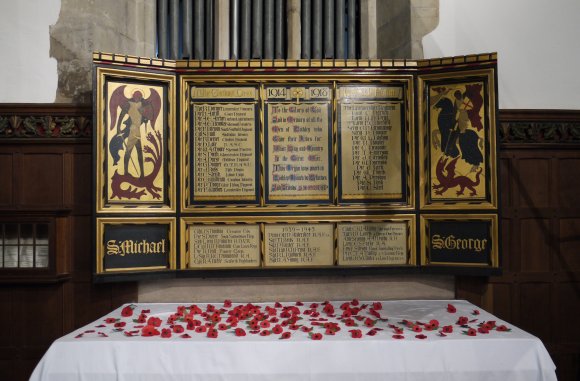 A poppy for every life

After the Memorial Organ was installed in the Parish Church a military trend developed at the east end of the North Aisle. War related objects and flags were donated and positioned in what began to take on the appearance of a War Memorial Chapel. An ornate reredos was commissioned from Leicester artist Miss Goddard featuring the names of all the Great War casualties, and mounted just behind and above the Kyngston Tomb.

By 1931 it was realised that these developments were significant changes to the Church interior, which had occurred without the usual diocesan permission. A meeting of the parishioners in the Village Hall on 7th December 1931 authorised the Churchwardens and Incumbent to apply for a Faculty. It was duly applied for and granted, and the detail is set out here:

CYRIL CHARLES BOWMAN by Divine permission LORD BISHOP OF LEICESTER To all whom it may concern more especially to the VICAR, Churchwardens, Parishioners, and Inhabitants of the Parish of ROTHLEY in the County of LEICESTER and within our Diocese and Jurisdiction.

WHEREAS it hath been represented unto us by a Petition under the hands of the Reverend ALFRED THOMAS GARDNER BLACKMORE, the Vicar, and G. CECIL GORHAM GEE and HUBERT SLEATH the Churchwardens and other Parishioners and Inhabitants of the Parish of Rothley in the County and Diocese of Leicester:

THAT in consequence of a desire to have in Rothley Parish Church a suitable memorial to the men of this Parish who fell in the Great War (1914-1918), the East End of the North Aisle has been converted into a War Memorial Chapel containing the following:

1. A carved oak kneeler with cushion and Prayer Book complete.

3. A Brass Crucifix to the memory of Lt. Col. John Fryer, 7th Hussars (the height of such crucifix to be slightly lowered).

6. Dedication Board with wings framed with names of the fallen.

THAT it is also desired:

To retain in the chancel a Sanctuary Lamp given in 1920 by Lt. Col. Abbot Robinson in memory of the officers and men of the Leicestershire Yeomanry who fell in the Great War.

THAT at a Parochial Church Council meeting of the said Parish, duly summoned and held in the Village Hall on December 7th 1931, it was unanimously resolved as follows, namely:-

"THAT a Faculty be applied for to cover contents of War Memorial Chapel".

THAT no graves, tombs, monuments, brasses, or monumental inscriptions, pews, or vaults claimed to be held by faculty or prescription, nor any other private rights will be affected by any proposed works.

RONALD RALPH by Divine permission LORD BISHOP OF LEICESTER To all whom it may concern more especially to the INCUMBENT Churchwardnes, Parishioners, and inhabitants of the Parish of ROTHLEY in the County of Leicester and within our Diocese and Jurisdiction.

WHEREAS it hath been represented unto us by a Petition under the hands of the Reverend John William Joyce the Incumbent and G. Cecil G. Gee and Hubert Sleath the Churchwardens and other Parishioners and Inhabitants of the Parish of Rothley.

THAT in consequence of a request by the relatives of those who died serving in H. M. forces in the 1939-1945 War, that these names should be added to those on the existing Memorial situated in the North Aisle of the Parish Church of Rothley aforesaid, it is proposed, in accordance with the design and estimate accompanying the said Petition and hereto annexed to add the names as shewn on the said design. The names are to be placed on the bottom panels of the present Memorial, and the wording and lettering are to be in the same style as at present. The names of those who died in the 1939-1945 War are to be with those of the 1914-1918 War and will thus complete the Memorial.

That the Architects are, and the work will be executed by The Wreake Valley Craftsmen Ltd. Thrussington, Leicester.

THAT at a Parochial Church Council Meeting of the said Parish duly summoned and held on Friday, March 13th 1953 it was unanimously resolved as follows, namely, "A letter was received from the British Legion, asking that the names of those who had fallen in the last war should be inscribed on the three panels below the names of those recorded in the first world war." It was proposed, seconded and carried that this should be done and Mr. Hancock promised to obtain a price and submit to the council, when a Faculty would be applied for.

AND WHEREAS the said Petitioners have prayed that Licence or Faculty may issue for the purposes aforesaid. 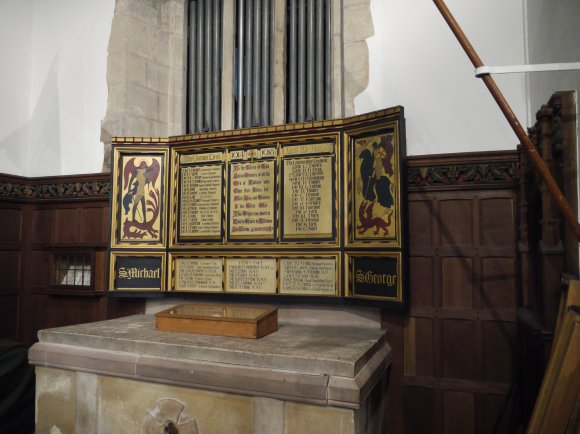 Our estimate for carrying out the alterations and additions to the Roll of Honour in accordance with your request is £27. 10. 0. This sum includes an amount of 30/- to cover the cost of transport to and from our workshops at Thrussington. If one of your members has transport suitable for conveying the Roll to our workshops you would perhaps wish to arrange your own transport, in the event of your doing so the total cost for the work would be £26.

A scale sketch showing the proposed alterations is enclosed 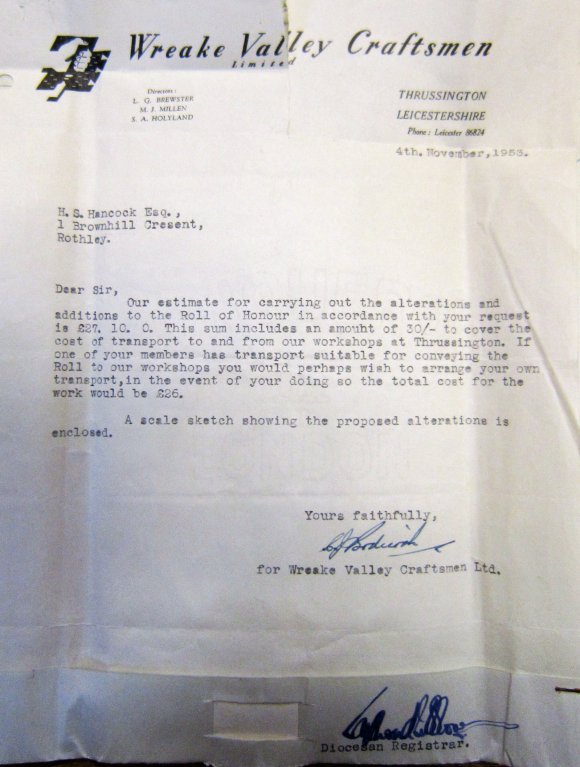 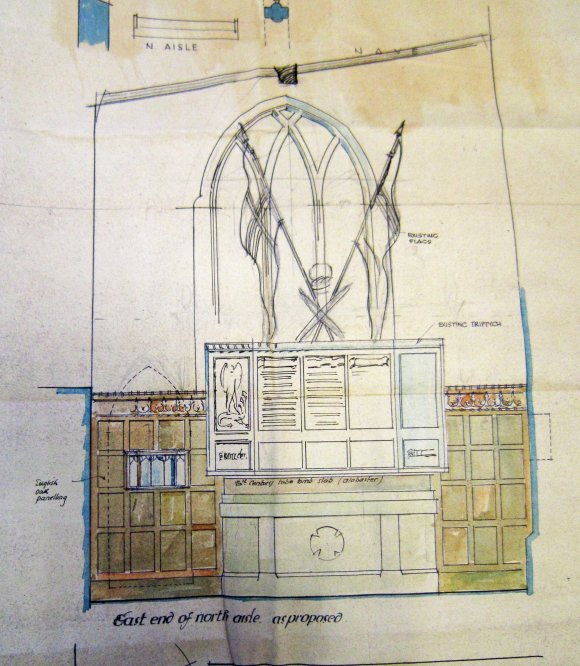 The design with the Faculty

The sketch image above from 1953 shows how the original flags were still positioned at that date. Progressively the idea of a War Memorial Chapel here adorned with all the objects listed in the 1931 faculty has slipped away. The Shell Case Vases and Candlesticks are no longer there, neither are the Blue and Gold Hangings, nor the Swords and Steel Helmets. The Union Jacks have long since fallen apart, but are replaced by the standard of the British Legion.

A search was made to see if these lost objects were still hidden away. The Candlesticks below are possibly the ones named in the Faculty. The very large Candlesticks were found in the shed at the rear of the Old School Rooms. Perhaps in years to come the other objects will be found in a roof space or tin trunk? 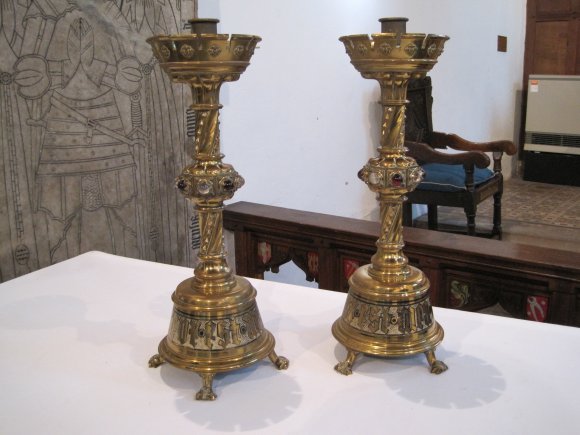 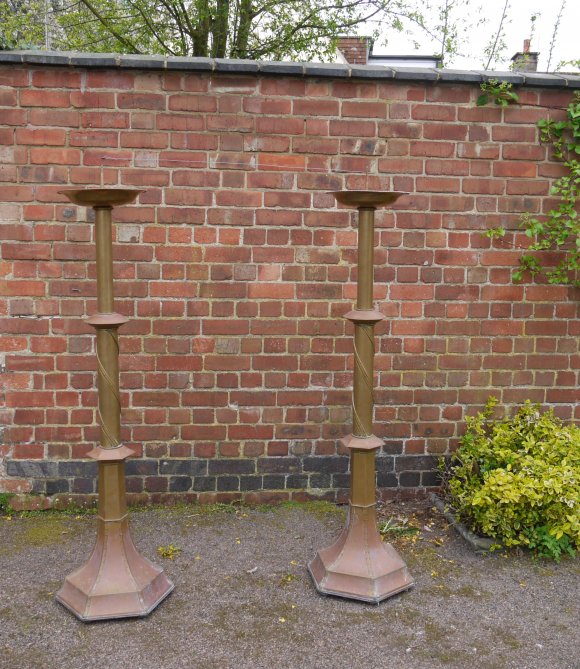 Found in a shed 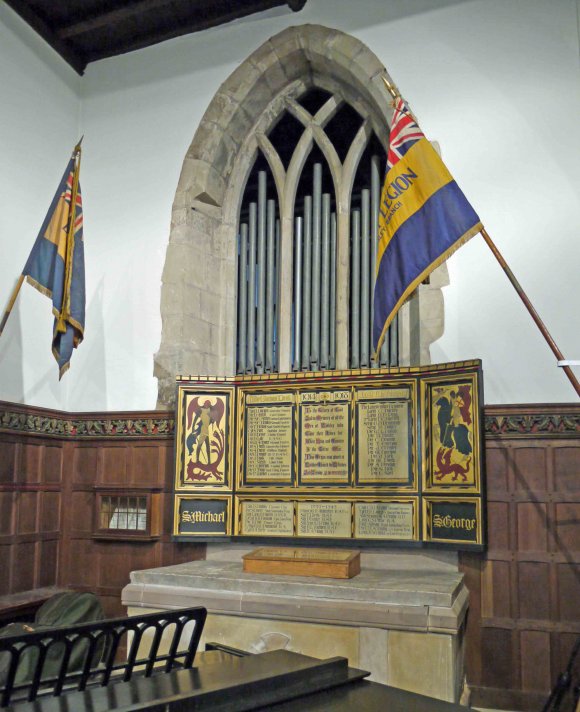 THE NAMES OF THOSE WHO DIED

Names on the left hand side 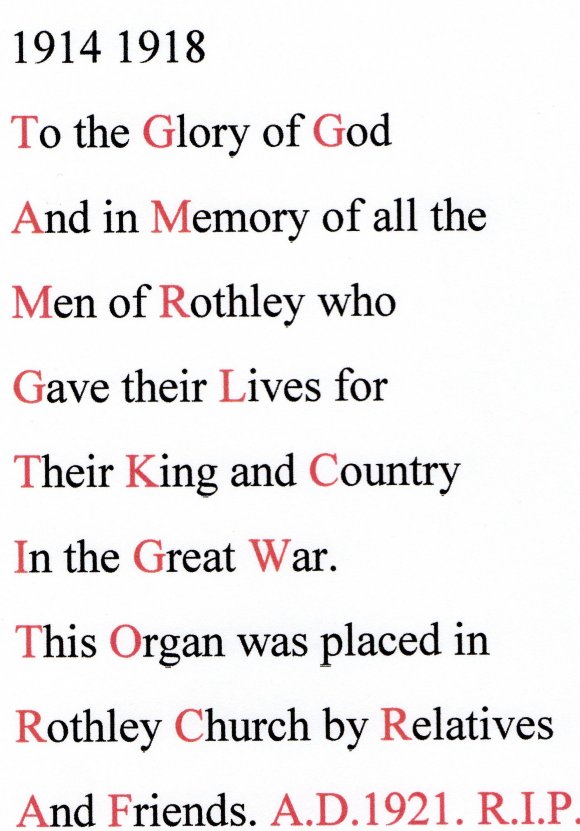 The centre is the Dedication of the Organ

Names on the right hand side 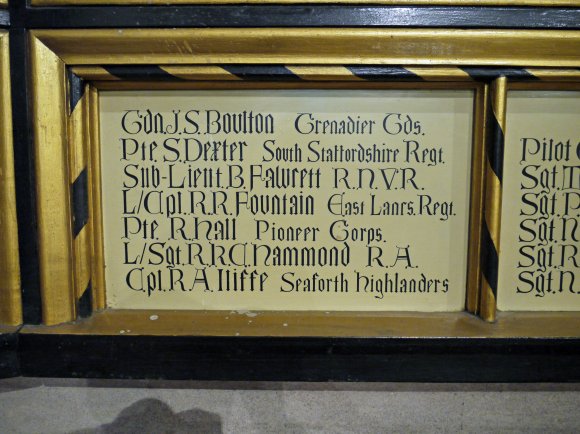 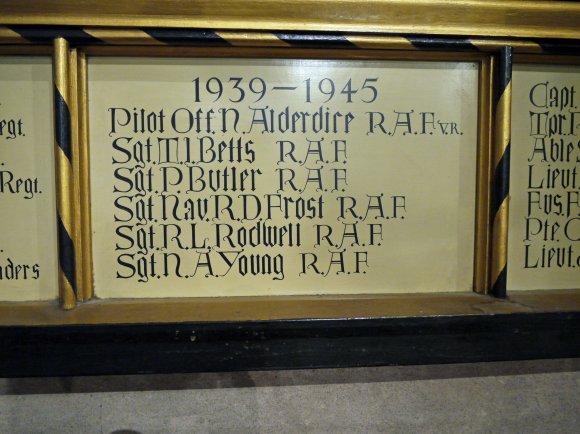 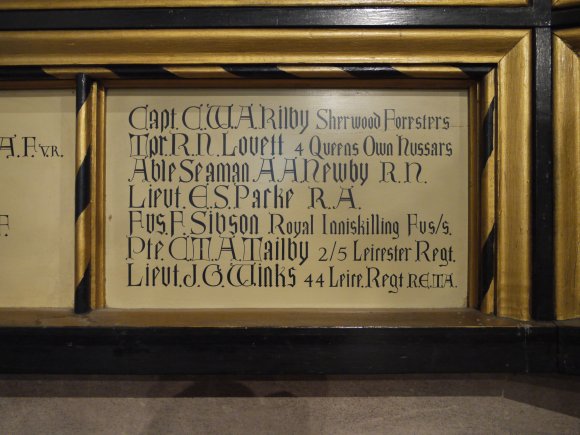 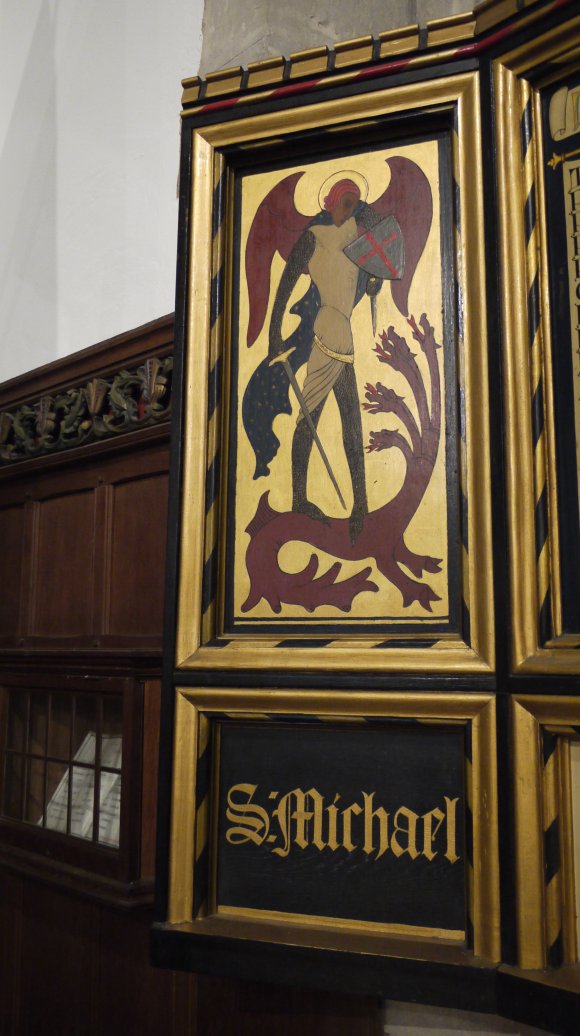