One of Rothley's most famous sons was the eldest child of the village shoemaker on North Street and through the application of his talent and hard work he became an accomplished artist, recognised throughout Europe for his skills as a sculptor and an inspiring teacher. 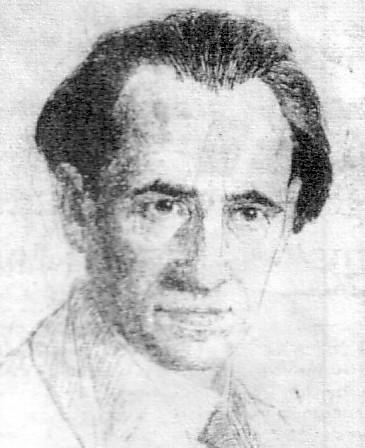 Robert Jackson Emerson was born in 1878, the eldest of 12 children born to John and Fanny Emerson (nee Bunney). The family lived at 25a North Street where Fanny ran the general store and John worked as a shoemaker and repairer.

The following details were obtained from a catalogue that accompanied an exhibition of R.J.Emerson's work at Wolverhampton Art Gallery in 1984. R.J.Emerson's nephew is Bob Lovett of Town Green Street, Rothley, who has all the information about his uncle's work.

R.J.Emerson's artistic ability was first recognised by the headmaster of the local school, himself an amateur artist, who encouraged him to attend classes at Leicester School of Arts and Crafts. He left school in 1893. At a time when few families could afford to have a potential wage earner in full-time professional training he was apprenticed to a nearby boot and shoe factory but was able to enrol for evening courses at the School of Art. This entailed a 14 mile walk three times a week from Rothley to Leicester, a measure of his enthusiasm and determination to obtain an art training. He put the exercise to good use, becoming village cycling champion and champion sprinter of the county. Later, he was able to attend Art School on a full-time basis and embarked on a remarkably successful student career.

In the National Competition exhibitions at South Kensington between 1901-1906, he was awarded gold, silver,two bronze medals, five Book prizes for modelling and life drawing, and in 1902 the King's prize for drawing from memory. He also achieved First Class Honours in design, modelling from life, modelling the head from life and modelling from the Antique. His prodigious talent earned for him several local scholarships and two free studentships; and in 1902 he was able to visit Rouen and Paris for a month to study metalwork and modelling. He married Anne Brewin in 1898 and having obtained his Art Master's Certificate in 1901 began teaching on a part-time basis to supplement his income. 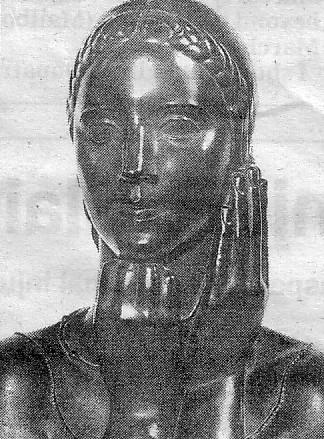 "Puella" on the cover of the programme of an exhibition of his work which was held in his honour at Wolverhampton in 1944 following his death.

By 1906 his was working for Collins and Company, a firm of art metalworkers run by William Pick in Princess Road, Leicester. Several examples of his work were shown by them at the Arts and Crafts Exhibition of that year at the Grafton Gallery. They produced a wide range of decorative metalwork including jewellery, door furniture, cabinet fittings and beaten metal or cast plaques for use in domestic or church furnishings.
Emerson's work of this period shows a mature and accomplished handling of modelling in low relief, integrating the figure into a decorative format. Emerson was probably working for William Pick until his move to Wolverhampton in 1910 where he was appointed second master at the Municipal School of Art.

The training offered in Wolverhampton School of Art, in common with other municipal Art Schools, was not intended to produce brilliant individual artists. Through a graded examinations system it was designed to train students to an assessable standard of proficiency in art skills and techniques such as drawing, clay modelling, metalwork, letter cutting in stone and leather work. Only a tiny minority of students were expected to go on to earn a living as professional artists. Their basic training was not geared to the production of art for art's sake, but to enable them to find work in a wide variety of the craft-based industries and in teaching (just as Emerson had done). The governing bodies of the schools saw art training primarily as a benefit to local industry, and Wolverhampton, whose economy was largely based on manufactured goods, was no exception.

Sir Charles Wheeler, Emerson's most famous pupil and lifelong friend and the sculptor of the fountains in Trafalgar Square recalls the day he was appointed.

"For me and many another student at Wolverhampton School of Art, it was a red letter day when, in the spring of 1910, three candidates for the second mastership appeared in the life room. We were all struck by the appearance of the shortest of them because of his large forehead and dark, lively, kindly eyes and were glad when R. J. was appointed...he showed us new things and beckoned us to new adventures, and instilled into us imagination and creative invention. His was the driving force and the directing power because, besides inspiring us, he taught us the craftsmanship of our art with a competence and authority we had not previously known."

Described by all who knew him as a modest and even shy man given to few words, he nonetheless had an aura of enthusiasm for the subject which was infectious, inspiring his students to strive to reach the high standards he set for them. Of necessity, his relationship with his students was extremely close.
He taught by direct practical demonstration and correction of student work with a dazzling virtuosity still recalled in awe by those who witnessed it. As Geoffrey Dudley former Head of Sculpture at Chelsea School of Art remarked: "Watching him model clay was like seeing magic take place before your eyes. It was almost frightening."

Albert Pountney describes Emerson's teaching drawings as follows: "R.J.Emerson was cast in the Renaissance mould. His teaching drawings, treasured by his students, were essays in balance, structure and composition. When in despair of his students' abilities to grasp essentials, or his own inability to make them understand he would, very occasionally, draw almost life-size from the model onto a blackboard in the life room whilst students watched or worked in amazement. Contrary to putting black marks on white paper, he laid in the light of the figure with white chalk on the black board. It was magic to see for his draughtsmanship was superb."

Emerson's capacity for hard work was a vital element in his success as a teacher, as he set an example of professional commitment to his art which the students could follow. He taught for four days a week from 10am to 4pm, returning to supervise the evening classes. This meant cramming a whole weeks work into the weekend at his own studio to complete commissions or to prepare work for the Royal Academy Exhibitions. Tom Whittel,the school caretaker, gave up his spare time to help in making plaster casts from his clay models and Emerson came to rely on his assistance in maintaining his output. It was this untiring creativity which his students admired and were, by implication, invited to imitate.
Emerson's teaching methods and the atmosphere of enthusiasm he generated were rewarded by the production of four winners of the Prix de Rome: Atri Brown, Thomas Bayliss Huxley Jones, Geoffrey Deeley and Albert Pountney. The Rome prize was the most prestigious post graduate scholarship granted to exceptionally able students, offering a two or three year period of travel and study in Europe. Emerson's reputation as a teacher became almost legendary within the profession and secured his election to the Faculty of Sculpture of The Prix de Rome in 1937. At the same time, Wolverhampton enjoyed national recognition as a major provincial centre for the study of sculpture.

Emerson retired in 1942 but continued to work despite severe illness until his death two years later. The demands of teaching and constrains of commission work frustrated to some extent the resolution of his own style during the 20's and 30's which was occasionally an uneasy compromise between formal simplification and naturalistic modelling. His work ranks alongside that of other conventional and successful sculptors of that period such as Charles Hartwell and Sir William Goscombe John whose styles were akin to his own. Although he became an established Royal Academy exhibitor, he was never elected as a member. This must have been a profound disappointment to him and in view of the other professional honours he gained, remains an inexplicable omission.
His greatest achievement was as a teacher. Many of his students went on to become teachers themselves after the war, extending His influence into the following generation, a philosophy of learning summed up in his own words: "I do believe, however, that by hard work a little knowledge can be obtained relating to the production of works of Art".

With thanks to his nephew Bob Lovett of Rothley for the above narrative and photographs.

The work of Emerson was featured as part of the above exhibition at Wolverhampton Art Gallery from 15th January 2011 to 15th January 2012. It traces the success of art and design in Wolverhampton and brings together works by local artists from their collection.
Please click on the following link to find out more:

With thanks to Jessica Bromley, Black Country Collections Curator, for the information about the exhibition at the Wolverhampton Art Gallery.

To find out more about the Wolverhampton Art Gallery please click on the following link: