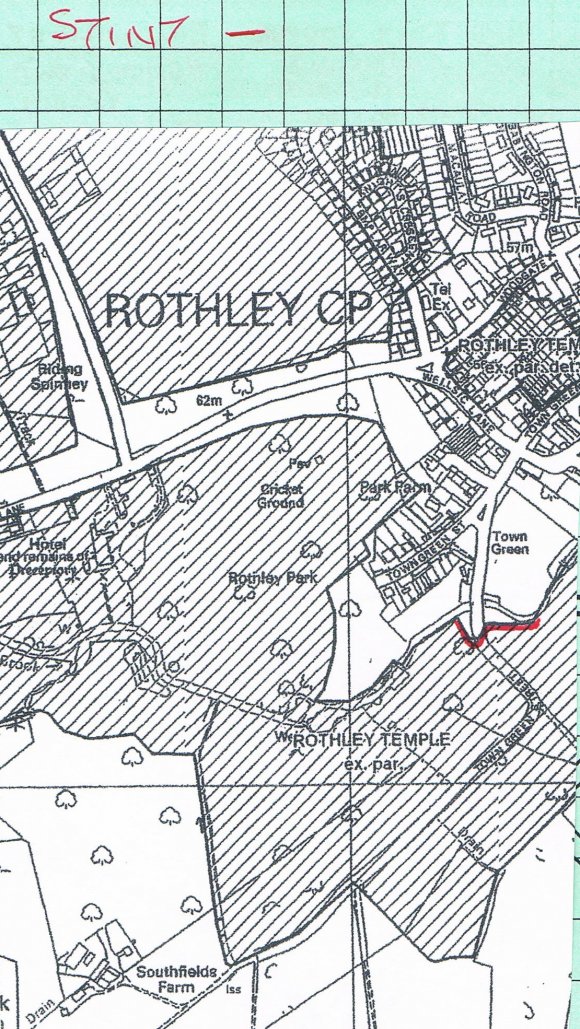 Location: Field accessed from the Bridle Road from Town Green

The end of the previous stint was on the boundary of Rothley Brook but we now cut across the corner of Bridge Close heading for the small gate beyond the current footpath stile. The point where we turn is at SK5817912196. Stint 7a is the meadow so no hedgerow but does end at an ancient Ash Tree 308 with a girth of 3.9 metres. This tree appears to stand on a mound with very exposed gnarled roots which raises the question of its base being washed away by water from time to time.

Stint 7b runs for 27 metres to the original gate with old iron hinges before it crosses the Bridle Road and enters yet more interesting landscape features.

The modern metal gate giving access to the public footpath was installed in 2009 to replace the wooden stile.

We re-visited this part of the Temple Boundary in March 2010 as the vegetation was difficult in June last year. We once again did photographs from the start of this stint, up to the old gate and over the Bridle Road. Stint 7b ended just in the ditch over the Bridle Road. 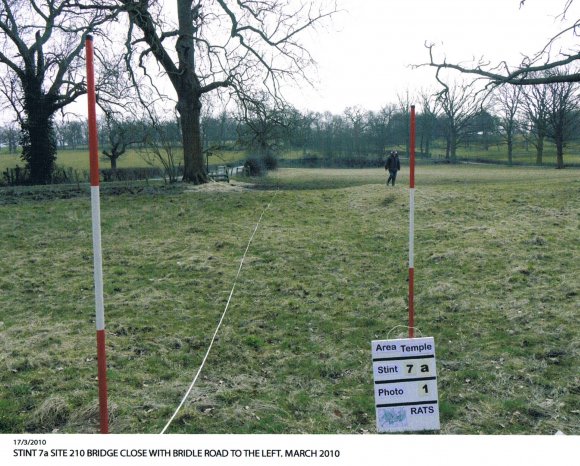 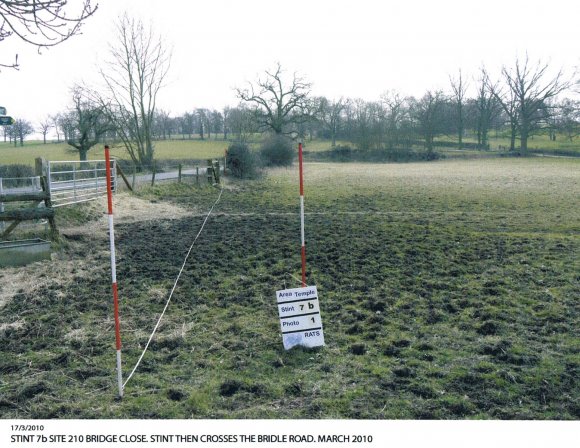 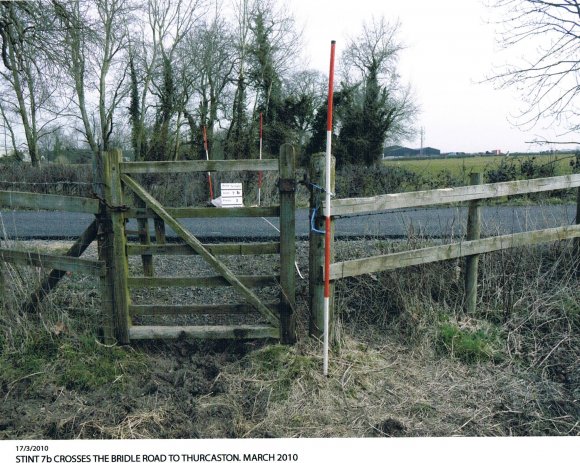 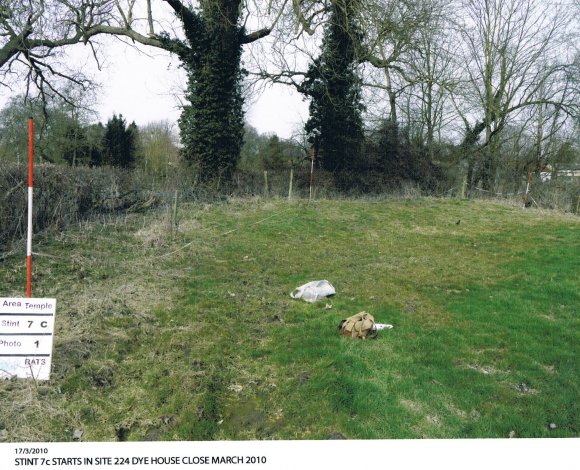 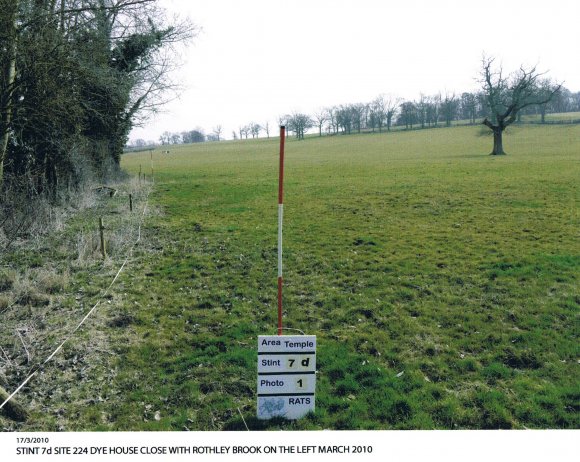 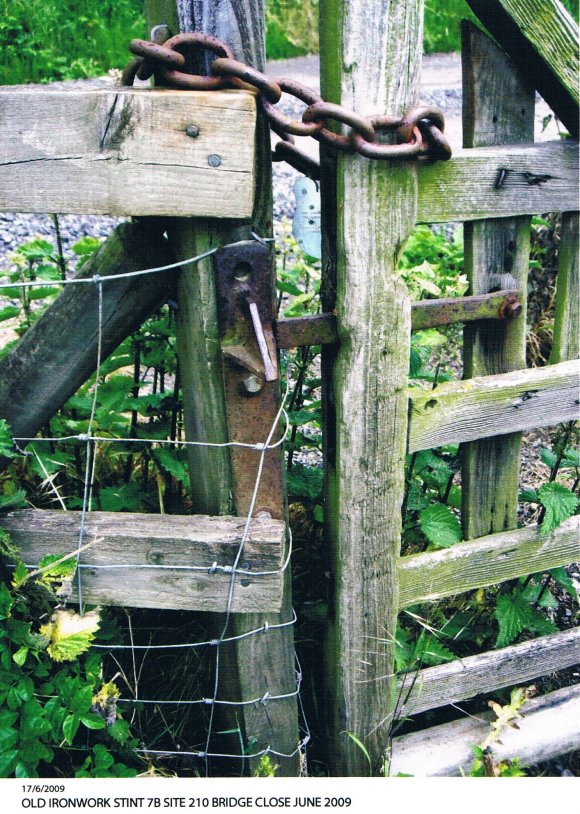 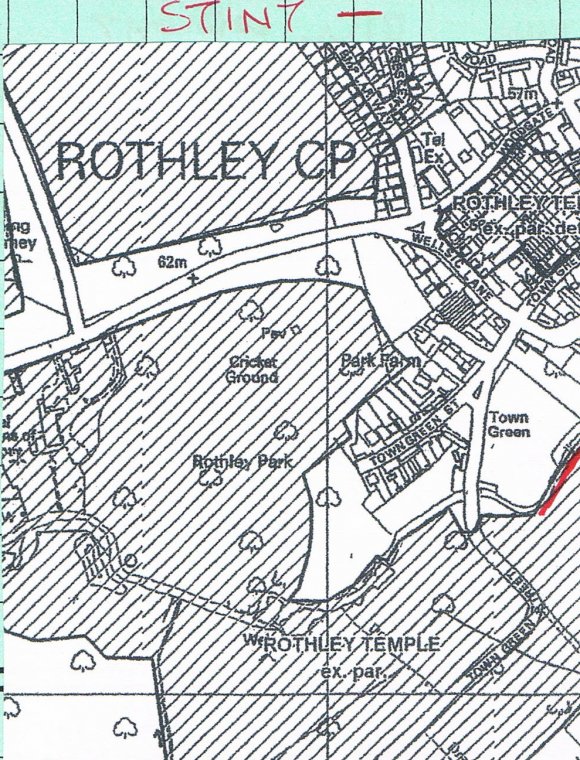 Location: Accessed from the Bridle Road through the small copse on the banks of Rothley Brook.

This stint runs along the banks of Rothley Brook but there is a hedgerow for all the distance. A Kingfisher flew along the brook during our visit.

The hedgerow is mainly blackthorn and hawthorn with elder and small ash. In Stint 8b there is a good sized Ash but not classed as ancient. We reached an area in Stint 8c where the bankside widens out and there are willows here. There is still a hedgerow along the Temple Boundary with ancient elder stumps.

In Stint 8d there is the first of two ancient Oaks, Tree 515 with a girth of 5.5metres. This is a beautiful tree and has a companion in Stint 9a.

On the old maps there are two fields here but the boundary hedge has been removed to make it look like one large field. Site 224 Dye House Close also includes Site 220 Brookfield. Before the flood alleviation scheme there was an ancient single arch stone bridge over Rothley Brook that shows on old maps to be accessed from Site 220. There is a photograph of this bridge taken by Bob Lovett but it is covered by vegetation and the real structure cannot be seen. However, it is a record of another lost piece of the history of Rothley Brook. 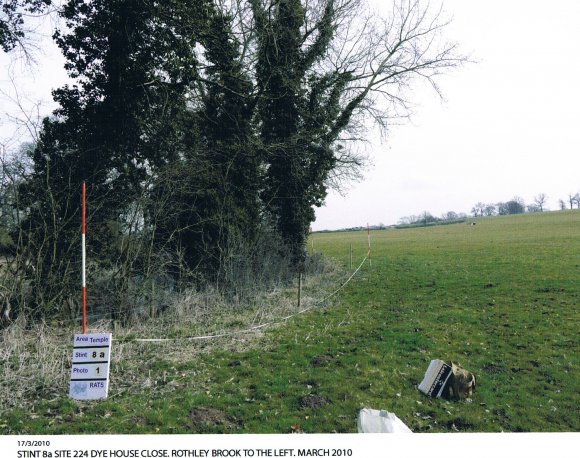 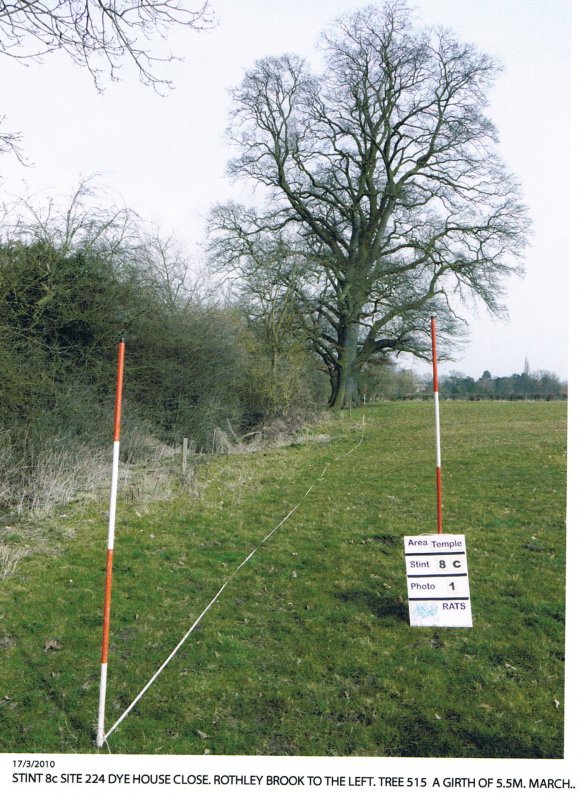 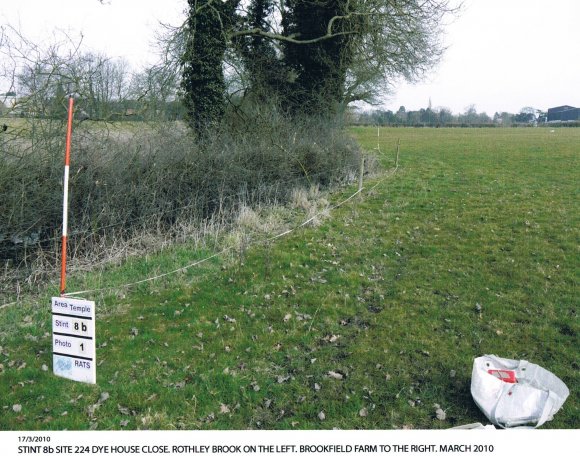 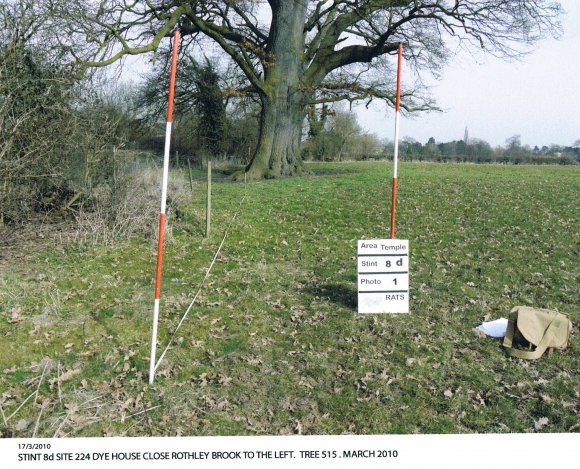 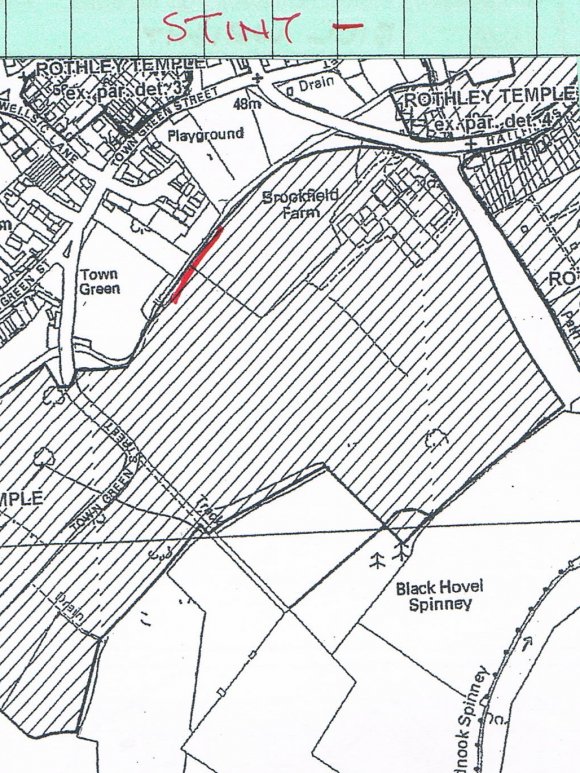 Location: Field accessed from the Bridle Road, through the small copse by the bridge at the start of the road and into the field. Stints 9c and d accessed from Brookfield Farm

At the start of this stint we have the second of two lovely ancient oaks, Tree 516 with a girth of 5.15m.

The hedgerow boundary is still running along the banks of Rothley Brook and mainly consists of blackthorn, hawthorn and elder. Brambles are starting to get thick.

Our next visit will need to start from inside North East Brookfield and this will be our very first visit to this field so any ancient trees will be new discoveries.

We parked in the farmyard of Brookfield Farm as this gave easier access.

Stint 9c and 9d still run along the banks of Rothley Brook (with an electric fence to stop animal access) with spaced boundary shrubs, not a hedgerow. We had an audience of two ponies who were very interested in our project.

There was a large Ash Tree with a split trunk on the banks of the brook but not accessible to measure. 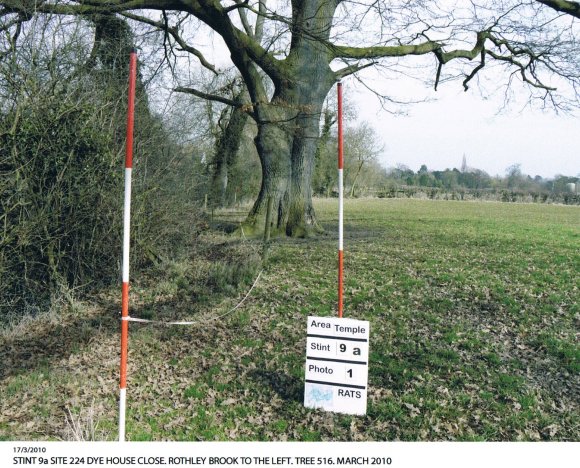 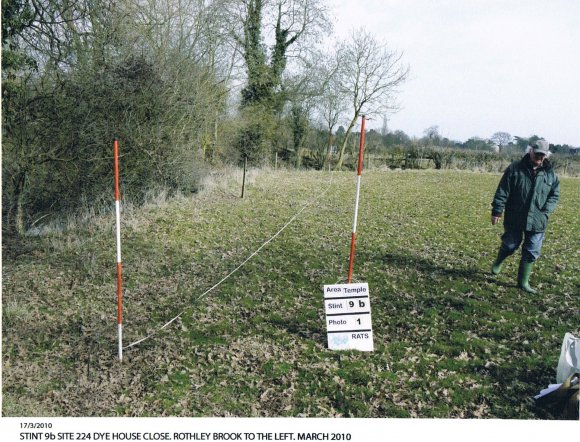 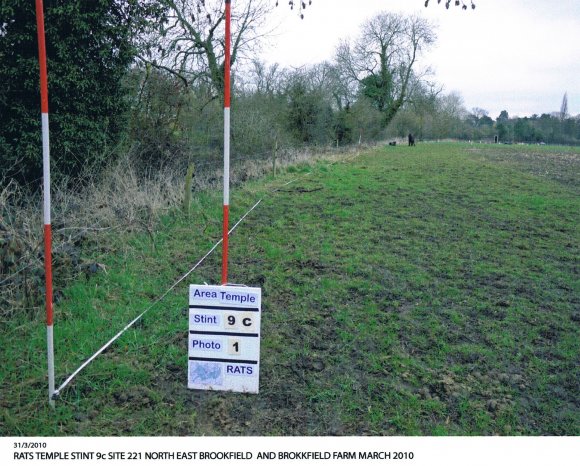 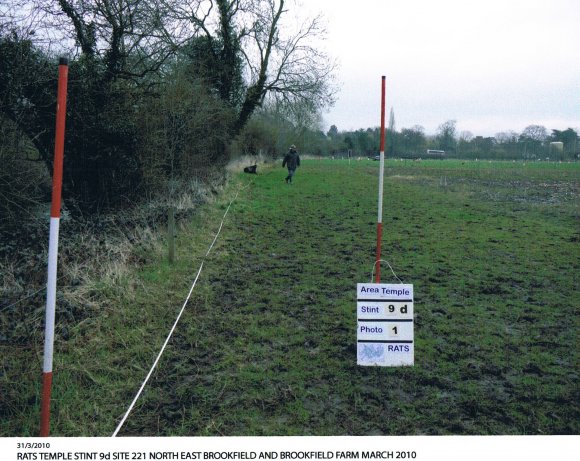 To continue with Stints 10-12 please click on the following link: