We were hoping to get access to the Rothley Park Golf Course but, due to playing activity, this proved rather difficult. We therefore missed out on this part of the boundary and show this by jumping from Stint 33 to Stint 100. Perhaps one day... 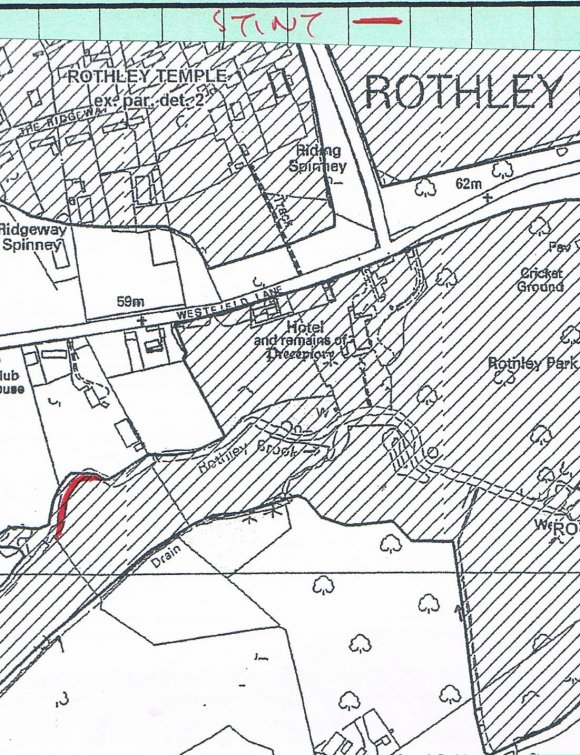 RATS TEMPLE STINT 100 (TO BE RE-NUMBERED)

NB This stint will be re-numbered when we link it up with stints within the area of the golf course which are on hold until we get access.

An interesting part of the Temple Boundary as we keep to the banks of the Rothley Brook.

This is the best place in Rothley for ancient Alder Trees which are on both sides of Rothley Brook but mainly on the boundary side.

There is no hedgerow as such in Stint 100A, just the Alders, but in 100B there is evidence of old Ash stumps as well as ancient Alder trees.

In 100C it is rather gappy but still evidence of old stumps, especially Ash. Ancient hawthorn is now showing but the best Alders are on the opposite bank. In Stint 100D, where there is nothing showing on the ancient boundary side, there are ancient alders and a willow on the opposite bank. 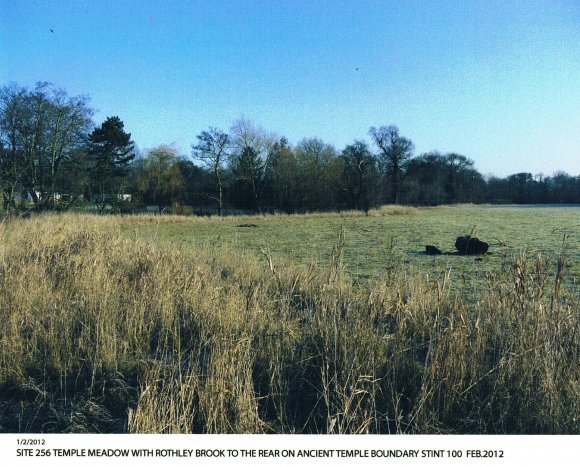 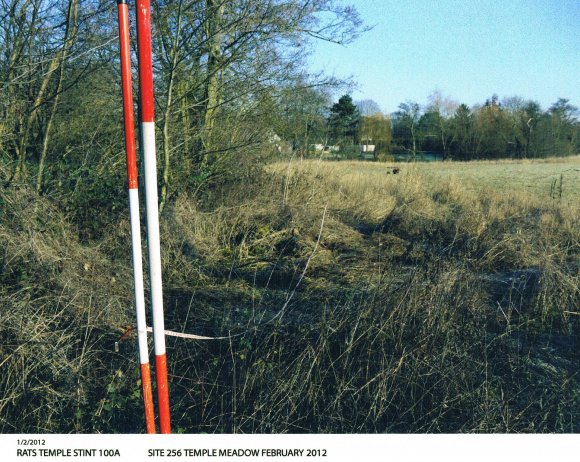 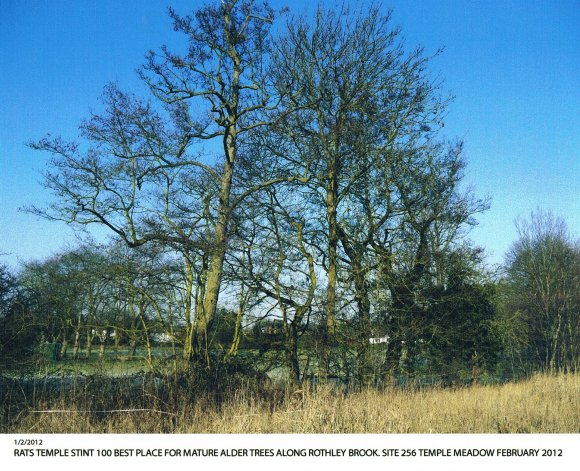 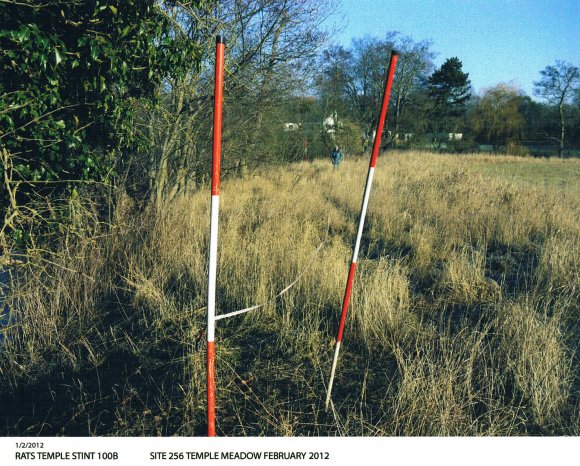 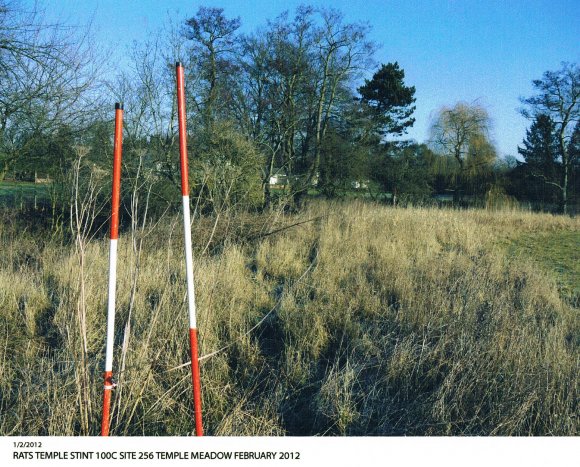 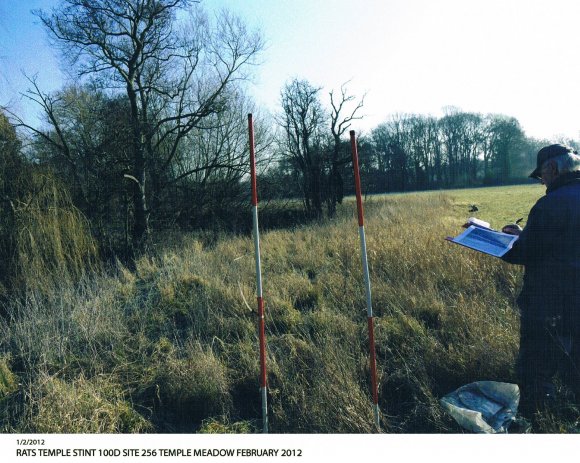 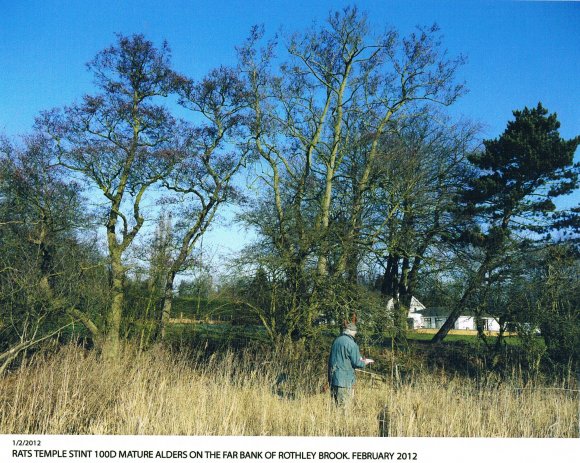 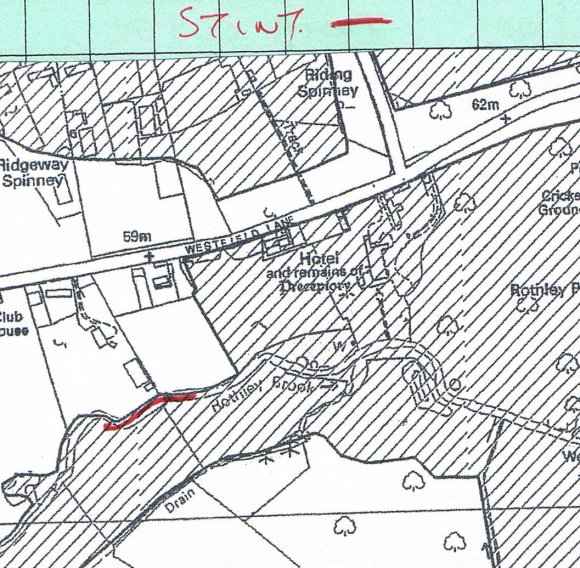 RATS TEMPLE STINT 101 (TO BE RE-NUMBERED)

NB This stint will be re-numbered when we link up with stints within the area of the golf course which are on hold until we get access.

We continue along the banks of Rothley Brook in Temple Meadow. In this first Stint 101A the brook noticeably curves round at the end of 13m of the 30m length. We now have a very good line of Ancient Alders with Ancient Hawthorn and ancient alder stumps. In addition there is Ash and Elder making it a more interesting mix. This continues in Stint 101B and most of Stint 101C but when we get to the back of Kingfishers Pool the line of vegetation ceases. Where the Ford once went through the Rothley Brook there is a lovely Ancient Oak Tree 563 with a girth of 4.1m. Ancient Hawthorn curves round towards this oak making it appear as the drive down and across the ford. In Stint 101D there is an Ancient Ash Stump and Field Rose starts to appear. 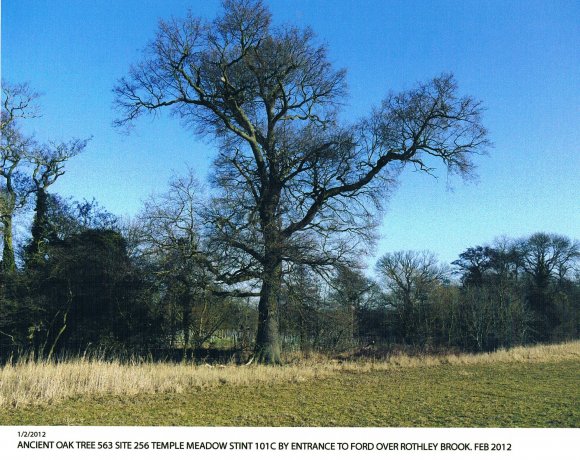 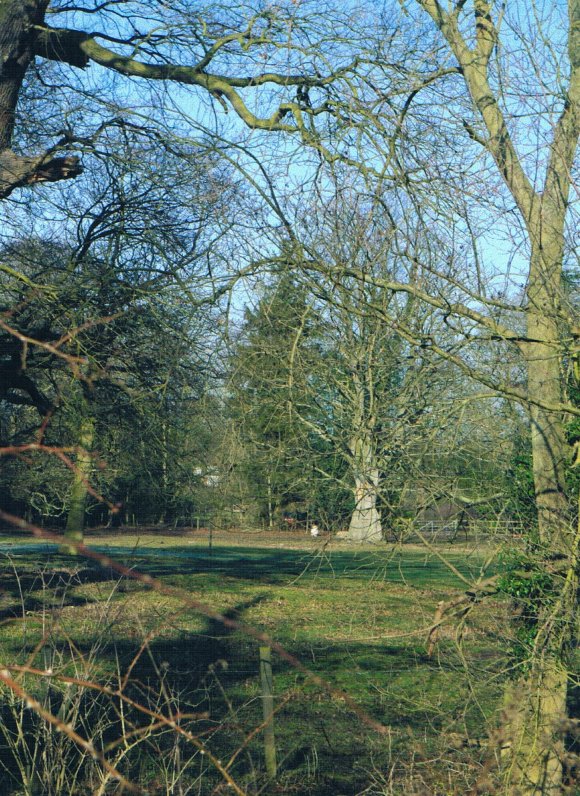 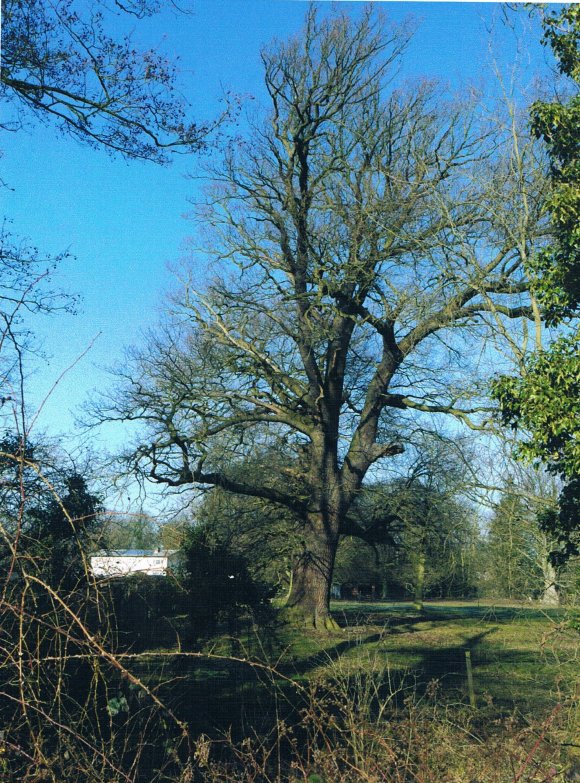 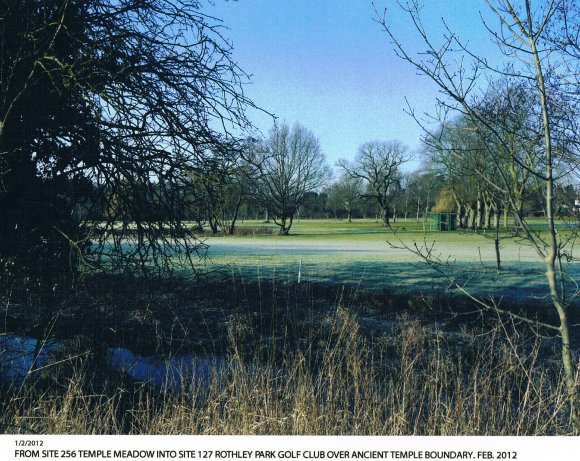 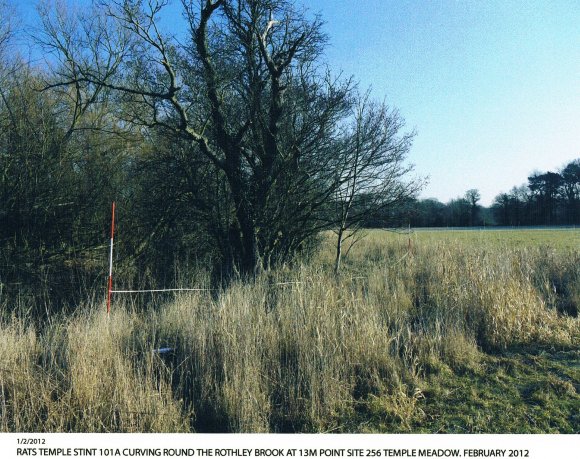 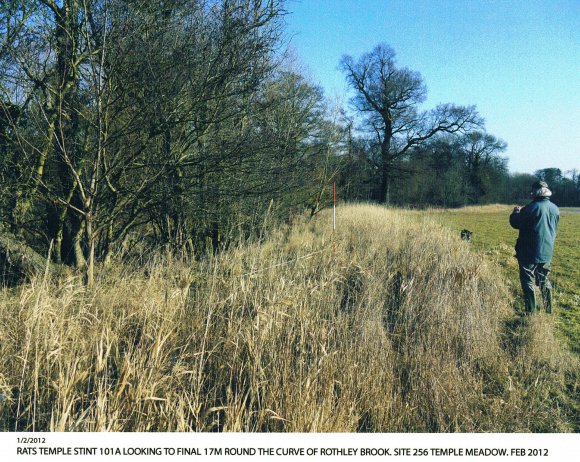 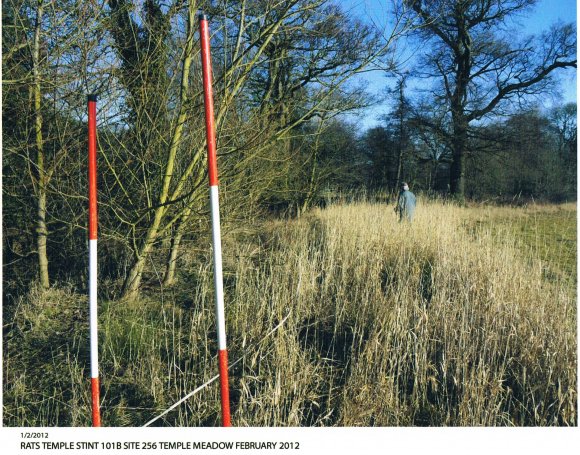 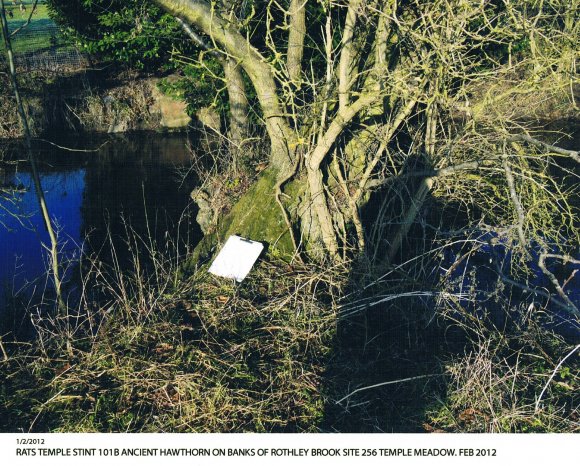 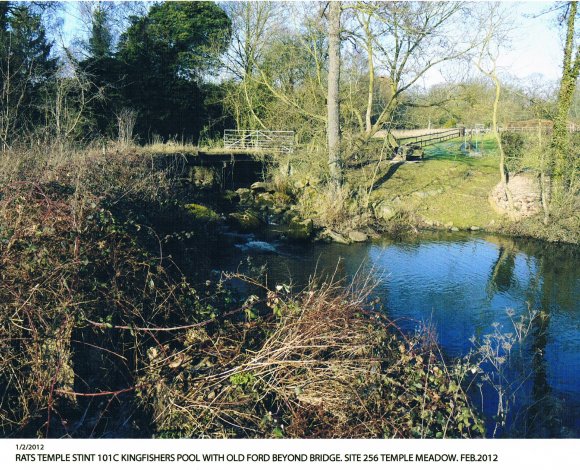 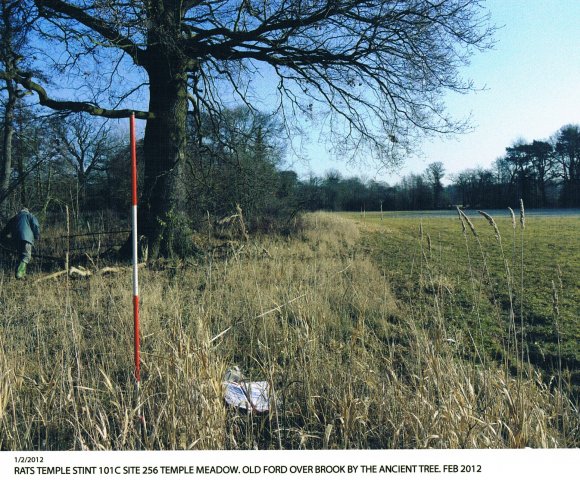 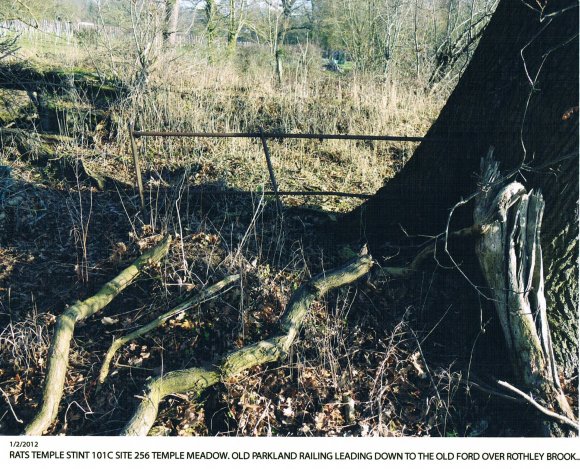 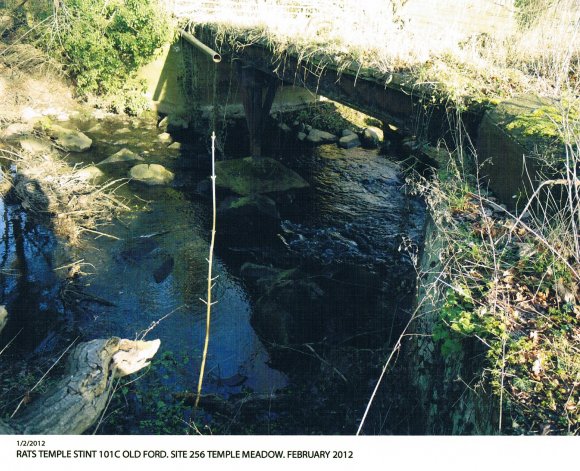 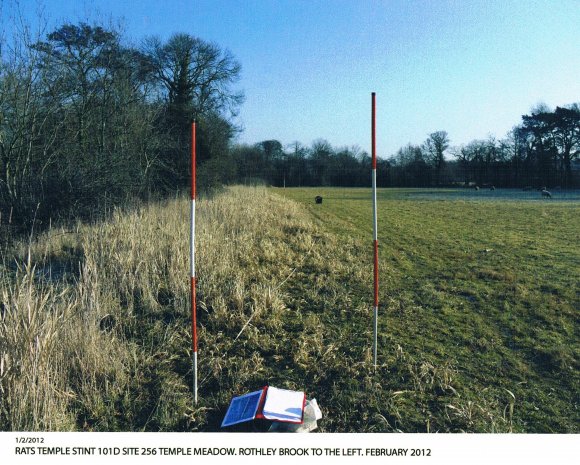 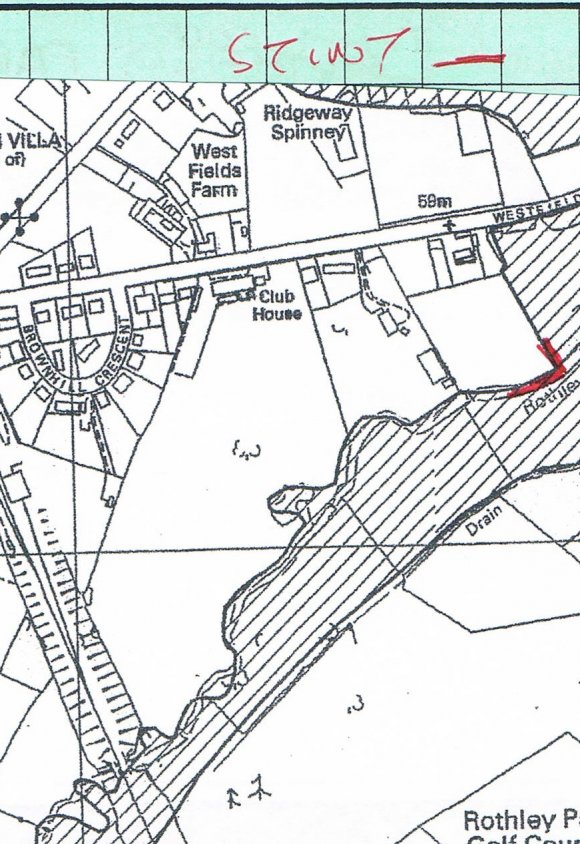 RATS TEMPLE STINT 102 (TO BE RE-NUMBERED

NB. This stint will be re-numbered when we link up with the stints within the area of the golf course which are on hold until we get access.

In Stint 102A we have a good selection of trees with ancient Alder and Hawthorn, Elder, Rose and Ash. This is a better mixture to give a more accurate age of this old boundary. there is a lot of bramble which is taking over the bank in places. In Stint 102B we have the same vegetation and it is at the end of this part of the stint that we come to a sudden turn over the Rothley Brook at SK5750812205. Here we have an Ancient Ash which is in very poor condition, having lost its top, has huge, dried, solid fungi around the base and looks to have a very limited life.

At this point we need to resume our survey from within Site 112 Temple Paddock.

Temple Paddock is accessed from the Westfield Lane and understood to be tenanted by Bill Wright of Brookfield Farm. It is owned by Rothley Temple Estates and used to be tenanted by the Hymans of Westfield Farm until Kathleen Hyman was told that it was being taken away from her and let for horse grazing. It will be good to get permission to go back in and check on the lovely ancient trees. Horses have no respect for such monuments and damage occurs where they are not protected by fences.

Permission given to work in Temple Paddock on rather a wet day.

Stint 102c starts at the edge of Rothley Brook but the old records show the boundary to run 4ft in from the hedgerow. It is interesting to see a slight dip in the field running up the boundary as though formerly it was a ditch. There is also a line of Oak Trees set this distant from the hedgerow and look as though they were planted along the original ancient boundary. Why else would they be standing in a line away from the hedgerow if not as markers? They would have been planted as part of the hedgerow as in other boundary trees. There are bluebells growing around the area close to the brook which would indicate old woodland. The Oaks are ancient and the hawthorn hedge also old. 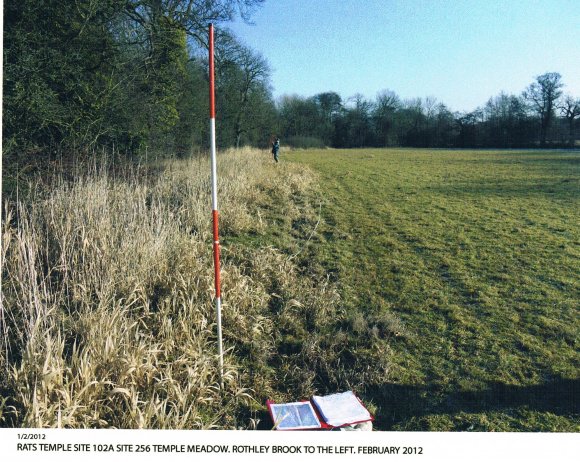 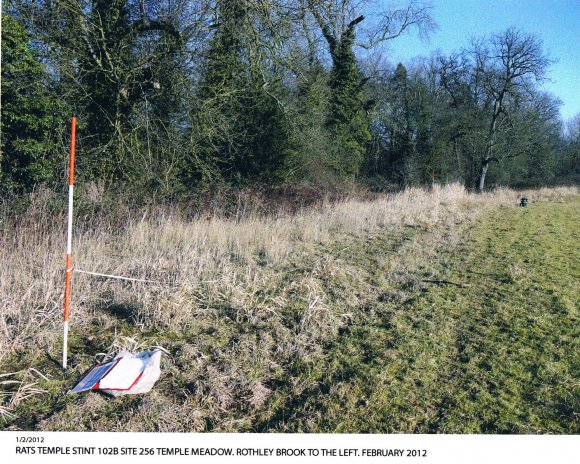 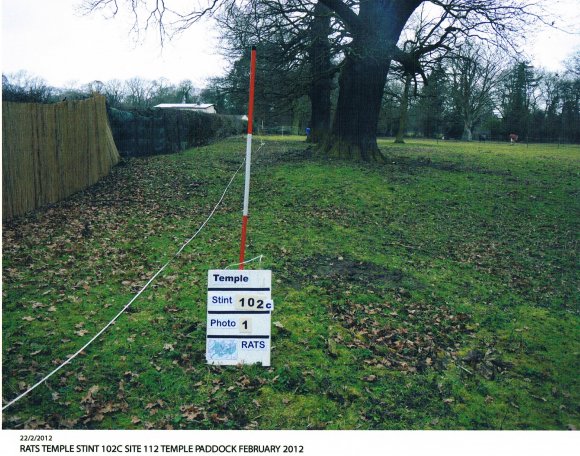 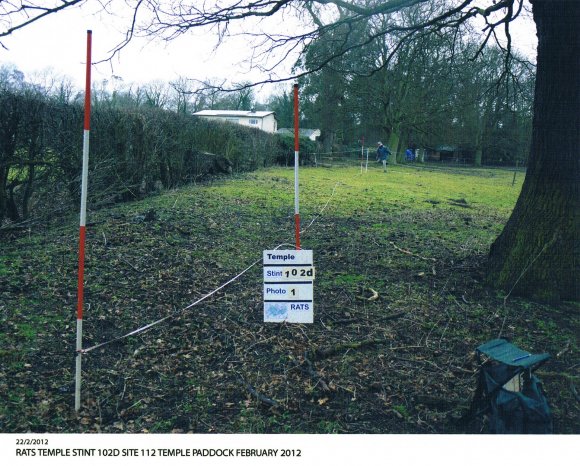 To continue with Stints 103-105 please click on the following link: