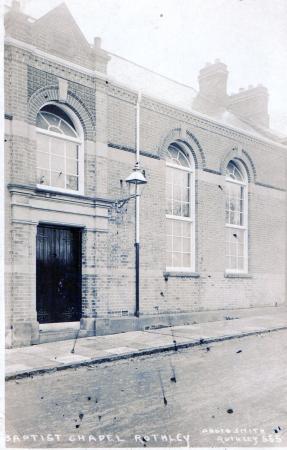 The original entrance to the Baptist Chapel was in Woodgate. The new entrance and porch were built in the late 1950's and front onto North Street 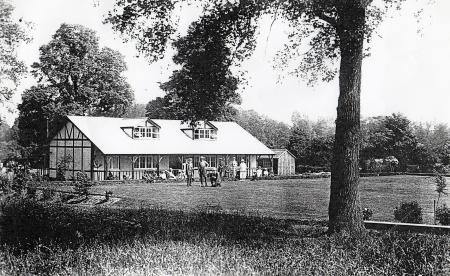 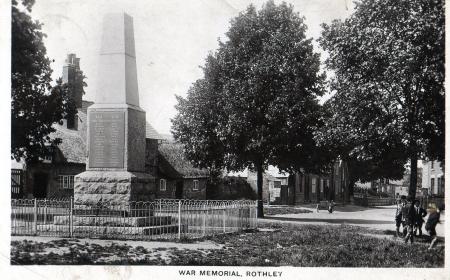 The War Memorial was unveiled on the 24th July 1921 and this postcard was postmarked Rothley 3 Aug '25. It was sent to Mr. and Mrs Daykin c/o Wm. Handford, Bungalow, St. Johns Vale, Keswick, Cumberland. The message reads

From Mr and Mrs Chapman.

The thatched cottages were demolished where the Rothley Fisheries are in 2010. 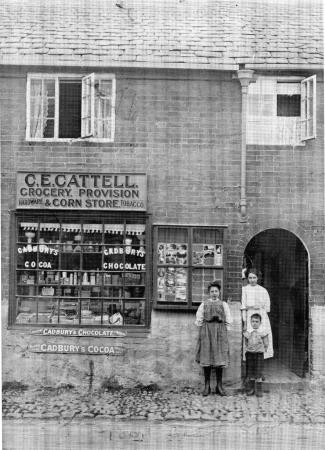 The shop of C E Cattell was at 30 Town Green Street and the above was taken around 1915. At the back is Gertie Cattell with her children Maggie and Bertie Cattell. 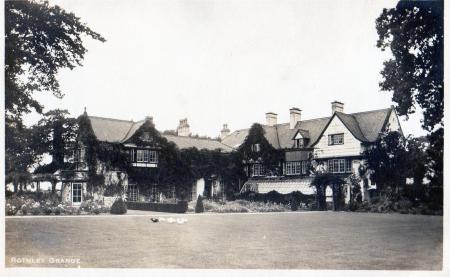 The rear of The Grange in Fowke Street now converted into apartments (2010) with two additional blocks to either side of the original house. 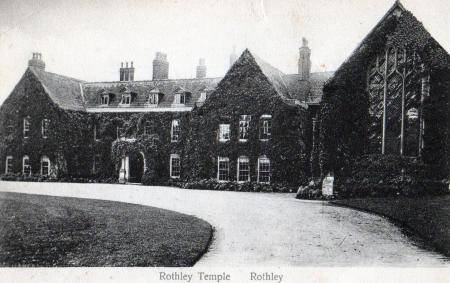 Ivy covered Rothley Temple before it was converted into a hotel. There was a period when it was a Nursing Home but this post card, printed in Berlin, has still to be dated 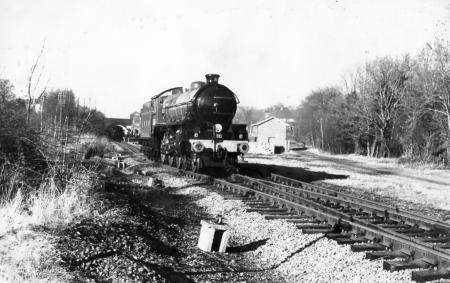 The Rothley Great Central Railway Station is in the background with Ellis's Coal and Coke building to the right. The engine is LNER with another engine under the bridge. This photograph was taken after the official closure of the station as only one set of lines remain. 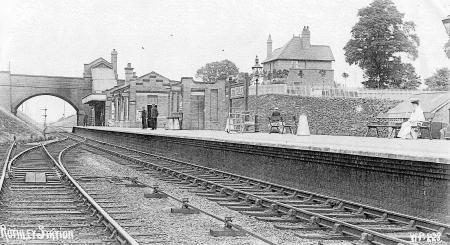 Rothley Great Central Station in the early days. Milk churns ready for the train and the passenger in Edwardian dress. Ellis's Coal and Coke building, now Ellis's Tea Rooms (2010) is behind the seated lady. The scene is very much like what we can see today in 2010. 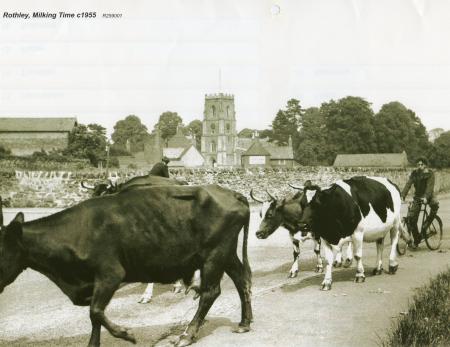 Sammy Holt's cows with evacuee employee from Temple Farm. Old barn to the right demolished in the late 1950's. 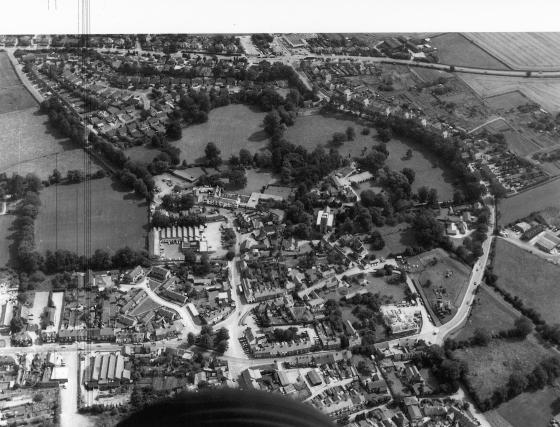 Aerial view of Rothley, possibly in early 1990, as the Regal Works are still in Mountsorrel Lane 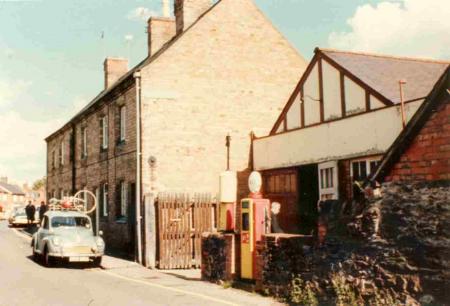 This will bring back a few memories of the 1960's in Woodgate before 'The Reliance Works' garage closed in early 1970 and demolished around 2000. Started by E. Marshall Hyman in 1921 as 'Engineer and Motor Vehicle Repairer' with 'Repairs and Overhauls a Speciality'. Further details below. 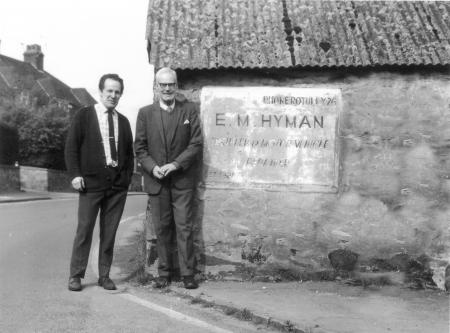 The above photograph is reproduced by kind permssion of Barrie Pook

Mike Hyman on the left with his father Marshall Hyman as a final record of the garage and the stone sign taken in 1974. Mike writes the following:

Marshall Hyman was a skilled engineering toolmaker, but in 1921 decided he would rather repair motor cars. He borrowed £100 and had a workshop built in Rothley and called it 'The Reliance Works'. It was big enough for just 3 cars. In one front corner of the plot was an old stone cow shed which served as a storehouse and later as a machine shop. It was also prominent enough for a sign board on the wall.

During the war he took on munitions work and I can remember watching him turning injector bodies and starting handles for Petter engines. I served my apprenticeship there as an 'Engineer and Motor Vehicle Repairer' in the early 1950's.

Along the front of the plot (as shown in photo 1a above) was a stone wall and rather than pull it down he had the petrol pump mounted on top of the wall-we had to climb on the wall to serve petrol!

The site is now a house at 49 Woodgate. 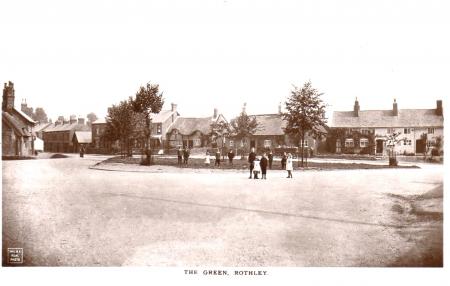 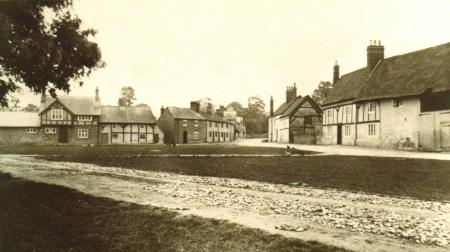 Rothley Town Green. Early 1900's. The Copper Beech we now see (2012) was planted in 1953 to commemorate the Coronation of Queen Elizabeth ll 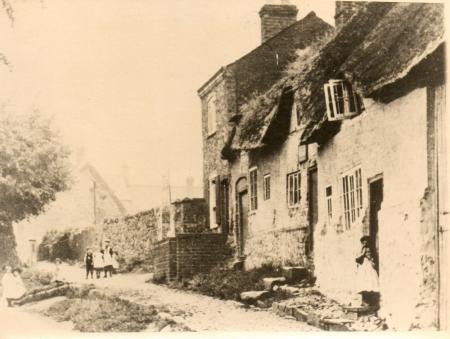 North Street looking to Cross Green. The side entrance to the Royal Oak car park is where the children are standing. The tall house with the tiled roof is still there (2012) 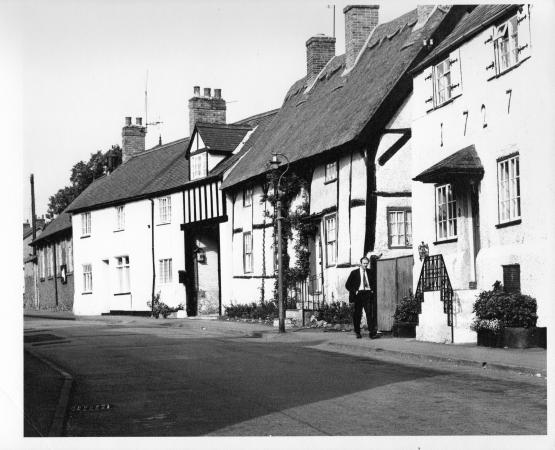 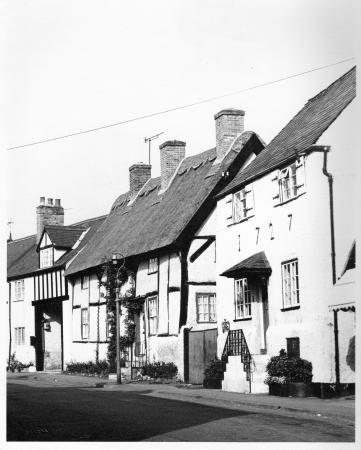 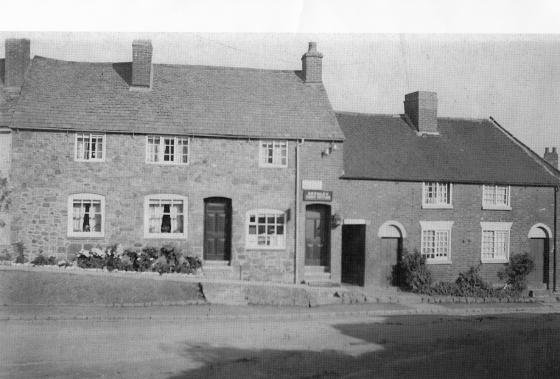 The Post Office on Cross Green in the days of Mr Joseph Archer, Postmaster 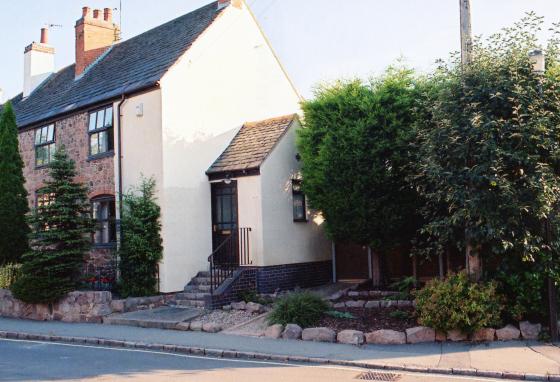 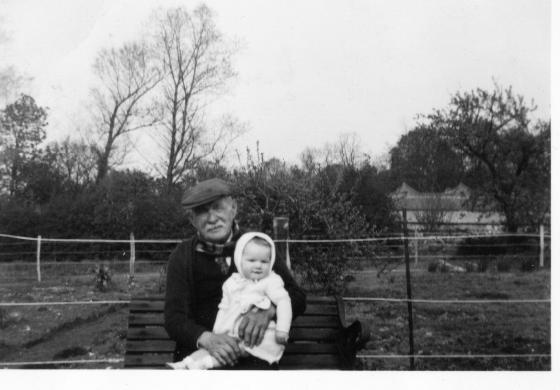 The above photograph was taken in the paddock at the back of the Post Office on Cross Green. This paddock was used to build the properties in Greenway Close. To the right can be seen The Grange in Fowke Street.
With thanks to Joyce Proudman (Overton) for photographs above 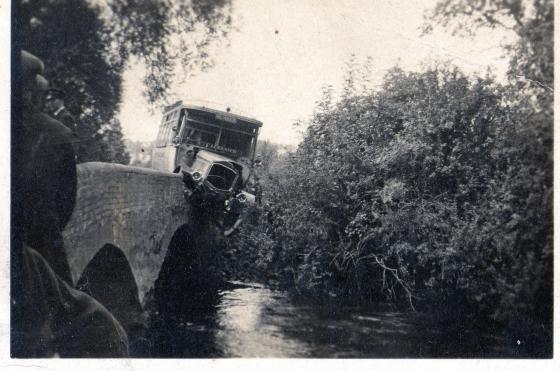 When Boyers bus crashed into Nott Bridge. In 2014 this is the bridge over Rothley Brook in Hallfields Lane