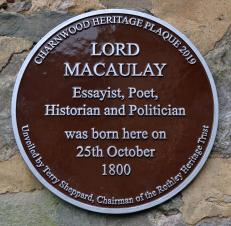 A Charnwood Heritage Plaque has been unveiled to commemorate local historian Lord Macaulay of Rothley.

The plaque was revealed at Rothley Court Hotel at a ceremony held on October 25, 2019 which would have been Lord Macaulay's 219th birthday.

The Mayor of Charnwood, Cllr Brenda Seaton said: "It was an honour to attend the unveiling of the plaque to commemorate Lord Macaulay of Rothley.

"The Charnwood Heritage Plaque scheme is a way of acknowledging the history of the borough and I look forward to seeing many more installed across Charnwood."

Peter Lewis, who chairs a panel which leads the plaque scheme, said: "It's great to see the heritage plaque in place at Rothley Court Hotel just below the room where Lord Macaulay was born all those years ago.

"The aim of the scheme is to ensure people know about the borough's history and we're now looking for more suggestions for future plaques.

"We commemorate not just people but events and local places that are significant in the story of our towns and villages, so I'd encourage people to submit their nominations with supporting evidence."

It is the third plaque which has been installed in Charnwood to honour interesting people, places and events which have a connection to the history and culture of our borough.

Last year two plaques were unveiled in Loughborough, one to honour the 158 Logistics Regiment and 203 Transport Squadron and the other marked the centenary of the First World War.

The Council would like to hear from communities and organisations about other suggestions for future plaques.

For more information or to nominate a person, place or event for consideration, please visit www.charnwood.gov.uk/heritage_plaques