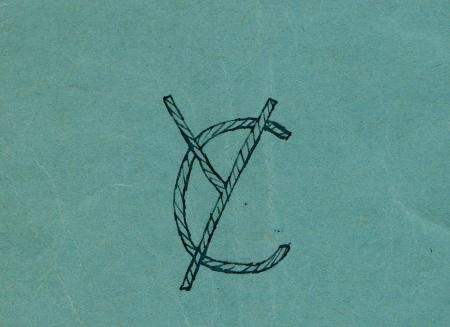 A full dress rehearsal was held, the boys changing in the sitting room and the girls in the old club room which is now the chapel, incidentally we haven't used this room as our clubroom since the beginning of Lent except for our short weekly service.
The rehearsal went fairly well. Mrs Becker watched and criticised. She said we'd have to know our parts better and speak louder, also she gave us a little advice. It was decided to have an extra rehearsal on Wednesday evening and yet another next Thursday at the meeting.
As the rehearsal did not end until about 9.50 it was decided not to hold the service.

During the whole of this week various items have been rehearsed and rehearsed and this evening the final rehearsal was held-not full dress as we decided it would make too long an evening. After the rehearsal a committee meeting was held. Tony also attended. It was decided to have either Tony or Mary present at every committee as they know, better than the committee, what can be done and what can not be done in the Vicarage. The meeting was, by the way, held in the sitting room.
Many suggestions came up, the most noteworthy being:- a "party affair" for the Quorn Y.P.F., an anniversary party, out-door meetings in the summer, a committee meeting every week, meeting of the Club once a month to discuss future events, more games, more talks and some Brain's Trusts.
It was brought to the notice of the committee that certain members have not been paying their twopences regularly. Two of these were called into the meeting, when it was found that one had been wrongly accused, the others reason was because she was fed up with the Club, however she agreed to pay as we all decided that the Club needed livening up a bit-the rehearsals are getting everyone down-we all hope that everything will now be O.K.
Next weeks programme was decided upon. The prayers were not held as the c.m. did not end till 9.45.

Our concert was held in the Village Hall on April 15th at 7.30pm. We all agree that it was a very successful show raising £24 for the Rothley Comforts Fund. The Hall was "packed out" and it was obvious that the audience appreciated the show from the applause each item received.
Bernard Ashwell was the announcer and Barbara Taylor played the piano accompaniment throughout.
The items were as follows:-

ERIC LARSON-saxophone solo. He played "Moonlight Becomes You" and "The Sheik of Arabi"
MONOLOGUES by John Glover.
JOAN WRIGHT singing "Velia" and "The Old Violin".
STEPS FOR SIXPENCE-a short sketch starring Selwyn Glover, Tony Becker, Mavis Burton and Joan Wright.
HANDBELLS played by Neville Waterfield, June Plowright, Betty Pitts, Pearl Pentelow, Barbara Taylor and Alan Roots.
BOB LOVETT singing "Song of Songs" and "My Heart and I".
BURGLARS!-an amusing sketch played by John Glover, Bob Lovett and Stanley Fletcher.
CONJURING performed by Cherry and June Mansell as natives of China.
LOIS BUCKLER singing and tap dancing.
"MAD CAPS" John and Selwyn Glover.
BOB LOVETT and JOAN WRIGHT singing "Fold Your Wings of Love Around Me" and "Land of Hope and Glory".
Then came the interval during which Mr. Wesley spoke about the Comforts Fund.
"DIXIE LAND" with Bill Hancock, Stanley Fletcher, Bob Lovett, Tony Becker and John Glover as the "residents" so to speak. Stanley, Tony and Bob sang solos so did the "guests" Philip, Mavis, Joan Wright, Pearl Pentelow.
Lois Buckler and Mavis Burton did a "tap dance".
Selwyn Glover played his accordion.
June Mansell also appeared as Hambone's (Tony's) dearly beloved.
At the end of our "good night" song "Shine, Shine Moon" the whole company trouped onto the stage so did our Producer Mary Becker to whom we offer our heartfelt thanks as she not only produced the concert but also made it possible.
The Vicar thanked everyone at the very end.

P.S.We were very pleased to see an appreciation of the Concert in the Leicester Mercury of Mon. April 17th.

Instead of the usual meeting we decided to attend the Baptist Young Peoples Concert as they attended ours in great numbers. This wasn't decided upon until last Sunday so we had to postpone the items arranged for to-night until next Thursday.

For the first time the meeting was held out of doors, this was appreciated by all. The boys collected logs to sit on and sticks for the fire. When everyone was gathered round the fire Flip gave a talk on television. Just after he started Tony and I had to leave to attend the Parochial Church Council Meeting. In our absence the Club played "rounders" The Y.C. meeting ended with the service conducted by the Vicar. before this I thanked the Vicar for all he had done for the Club.
A committee meeting was held, Tony and Mary also attending. We discussed next weeks programme and new members for the Club. Also we decided to present Betty Patrick with a gift as she is leaving us to join the W.R.N.S.