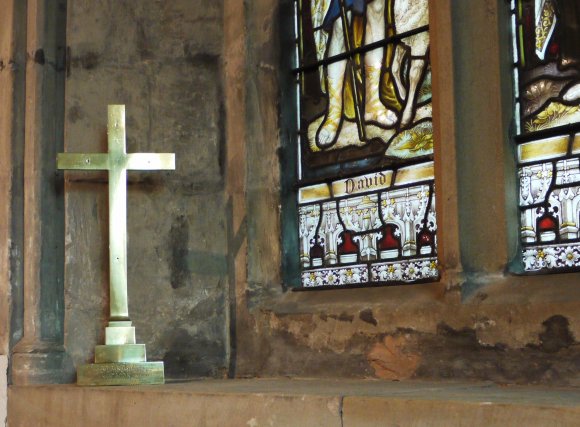 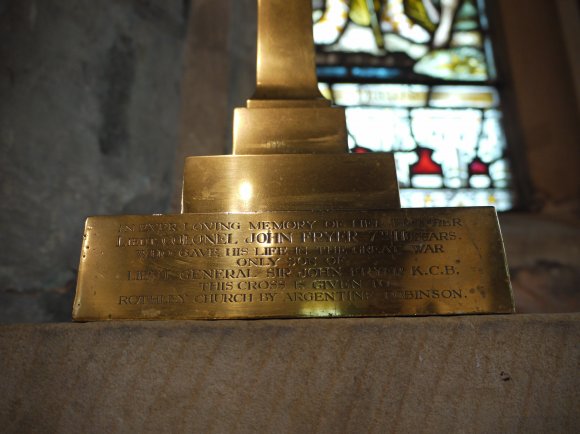 IN EVER LOVING MEMORY OF HER BROTHER
LIEUT. COLONEL JOHN FRYER 7TH HUSSARS
WHO GAVE HIS LIFE IN THE GREAT WAR
ONLY SON OF
LIEUT. GENERAL SIR JOHN FRYER K.C.B.
THIS CROSS IS GIVEN TO
ROTHLEY CHURCH BY ARGENTINE ROBINSON

Argentine Robinson lived at The Grange, Fowke Street, Rothley, with her husband Lieut. Colonel Abbott Robinson, of the Leicestershire Yeomanry. Her brother died on the 2nd March 1920 aged 49, and is buried in the churchyard at Kinson, Hampshire, the home of the Fryer family. Mary Argentine Fryer married Abbott Robinson on June 27th 1894 at St. Paul's Church, Knightsbridge. She was known for her eccentric ways, which perhaps shows in the wording of the dedication on this cross. Her brother John was not a Lieutenant Colonel in the 7th Queen's Own Hussars, he was a Major.