Unlike many churchyards the headstones in Rothley are still mainly in their original locations. The following pages show the details from the headstones but not the full list of burials. 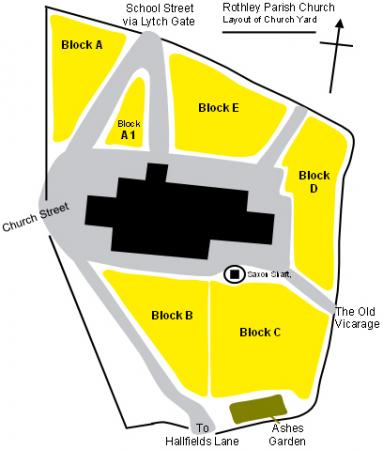 The churchyard has been divided into six blocks to make it easier for anyone trying to locate a particular headstone.

Anyone searching for a headstone will know that some parts are unreadable due to stone erosion and vegetation. Care was taken not to disturb lichens as churchyards are of great importance as sites for rare species.

The project to record the gravestones was the idea of Iris Calow with assistance from Kath and Ian Geary,John Brooks, Mr and Mrs Sharpe and Marion Vincent. The whole project was completely revised by Marion Vincent, Terry Sheppard and Pauline Sheppard with assistance from Brian Verity on the Latin inscriptions. With thanks to Terry Sheppard for all his time spent in re-producing over 250 of the gravestone images in the format that you see on the pages and for all his research on gravestones that were difficult to read. All the website work completed by Marion Vincent, the Rothley Village Website Site Editor.

Following on from the project to record the gravestones a further initiative took place between June and December 2011. Frank Whitby and Terry Sheppard with support from other church members have been repairing broken headstones and straightening others, not just for safety reasons, but to preserve our history.