This field was once owned by Mr Bunney and when it was purchased by the Harry Hames Trust on behalf of the Rothley Parish Council the name was retained. From a smallholding with a wonderful collection of farm machinery and hens it became a recreation ground for the village. It is also used for village events such as celebration picnics. It can get a bit waterlogged so any events are always subject to the weather!

Trees were planted on the boundary with Hallfields Lane and an old apple tree was retained. The Rothley Brook runs along one boundary and along Anthony Street there is a very overgrown and neglected hedgerow.

The pedestrian entrance is from Anthony Street and this was getting very overgrown with dogwood and blackthorn and weeds fast invading the paving. In 2011 it was time to move in with the gardening tools so that residents with children and pushchairs could get access without forging through the ever-increasing vegetation.

Thanks go to Steve for all his work on the project and making many visits to the green waste bins at the tip. This is also a place for general litter so constant monitoring is needed to keep this clean and tidy 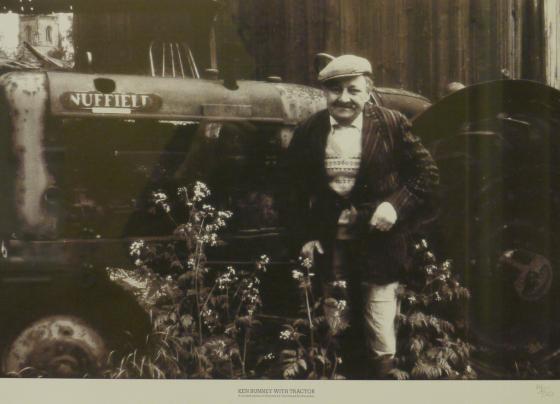 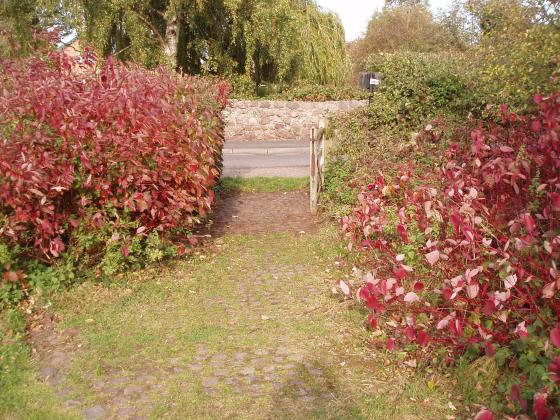 The entrance from Anthony Street. Vegetation previously cut back and left in a heap to the right. Summer 2011 Vegetation previously cut back was left in a decaying heap to the right of the gate. 2011 Clearing the grass just inside the gate revealed the granite setts. 2011 The entrance area starts to be revealed. 2011 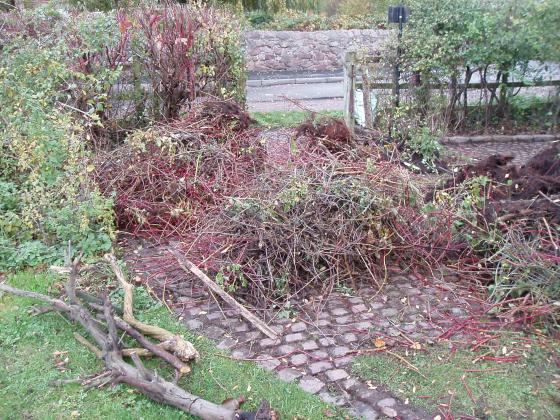 Years of neglect all cut back ready for the tip. 2011 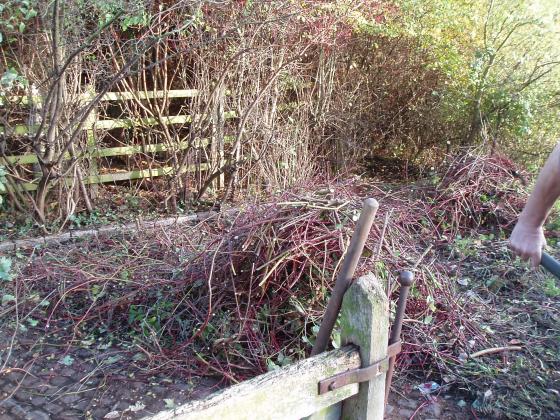 The extent of the granite setts was soon revealed. 2011 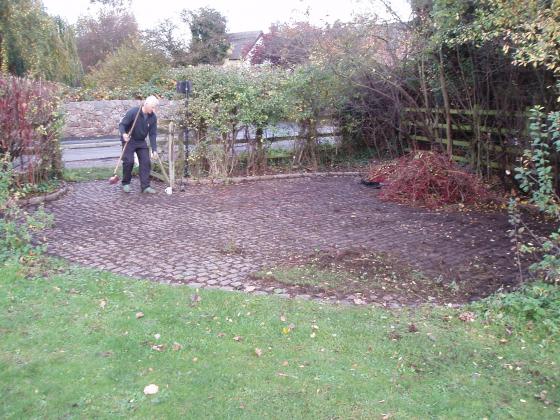 Having cut back all the grass we could then see how much work had been put into creating the entrance. 2011 Granite setts may look rural but they are very difficult to keep free of weeds and need constant attention. 2011 Still working during the late autumn. 2011 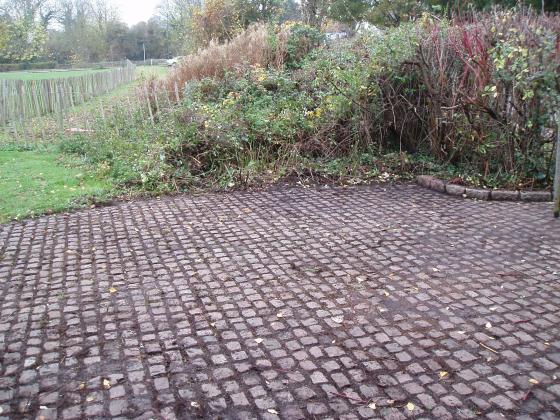 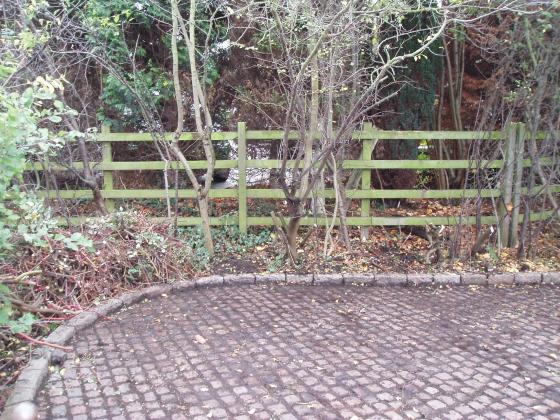 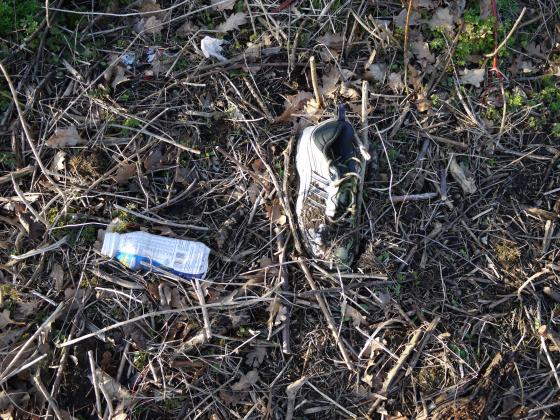 2012 litter just inside the gate. Not to mention cans and packets.
If residents want a clean Rothley then please stop throwing your rubbish in public areas, especailly where there are young children.

A litter pick was done in early April 2013 around the area of the ditch by Hallfields Lane. However, we soon realised that this was going to be a mammoth task due to the length of the hedgerow opposite Dutchmans Wall, the overgrown area between this and the ditch and the inaccessibility of the immense amount of litter.
Action was needed! A letter was sent to Rothley Parish Council outlining the situation of this 'Grot Spot' and a meeting was held on site with the Chairman. In May 2013 it was agreed that the Harry Hames Trust would finance improvements including clearance of the site, a new fence, hedging and the tidying of the boundary with the Woodmans Stroke.
In the meantime, Steve Mitchell did a major cut back of the boundary and the Parish Council arranged for removal of the debris.

We are now waiting for confirmation of the final plan.

It also needs to be mentioned that any group using Bunney's Field must remove their equipment at the end of every session. There is no provision for storage and items left under cover of any hedgerow will be treated as fly-tipping. 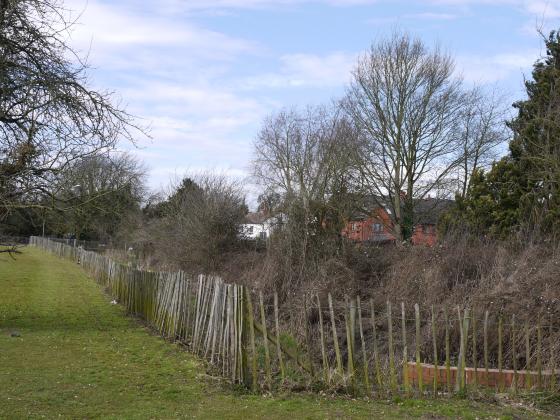 March 2013. The area opposite the Dutchmans Wall which needs clearing out and the litter removed. The area to the left to be cleared and the hedgerow to the right on the boundary of the Woodmans Stroke. The ancient apple tree is being cleared of ivy. March 2013 The ditch runs from Hallfields Lane, then goes under the field to the Rothley Brook. April 2013 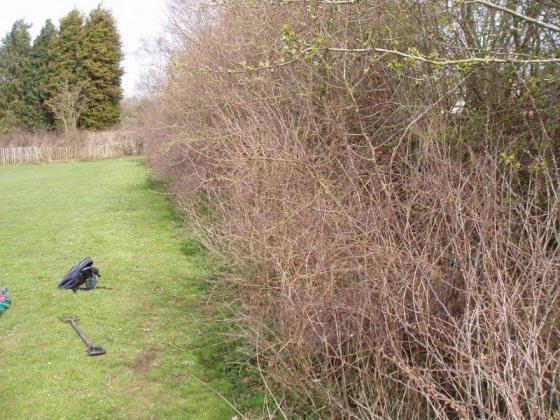 The boundary hedgerow with the Woodmans Stroke is very overgrown and contains a great deal of litter. April 2013 Litter is a big problem in this hedgerow. April 2013 Two huge piles of vegetation waiting to be removed. April 2013 Blackthorn creeps and becomes dense. It is lovely to see it in the spring and its sloes have mnay uses but you can have too much of a good thing! April 2013

Bunney's Field also features in The Landscape of Rothley which can be accessed by clicking on the following link: