In his Will dated 4th June 1683 Bartholomew Hickling left a cottage and several pieces of land in trust for the setting up of a school in Rothley to be free only for 14 or 15 boys of the poorer sort of inhabitants. To pay a good, able and efficient schoolmaster to teach the reading of English and also Latin but primarily for the reading of perfect English.
Thomas Babington and his heirs together with the Rectors of Thurcaston and Cossington, were appointed overseer of the five Trustees. When they met once a year they were allowed 5 shillings for drink.

It appears that in 1825 the surviving heir of the original trustees, Richard Fowkes, conveyed all the property belonging to this Charity to the use of himself, Jonathan Leake, Thomas Paget, Samuel Wilkinson and Joseph Newbold. The property consisted of a house and garden in Rothley to which a schoolroom was attached and occupied by John Swinden, the schoolmaster. Also, 2 pieces pf pasture land let to Thomas Taylor at an annual rent of £7, a piece of arable land in Woodfield and Linkfield and a small piece in Rothley Plain both in occupation by the schoolmaster and rent free. The annual value would have been £6.10.0. The master, who can hold the position for life, is entitles to the whole income of the Charity less school house repairs and 5/- for expenses of the annual meeting for drink. The master teaches the boys sent by the Trustees at no cost and number about 15. They learn reading, writing and arithmetic. The master can also teach scholars where families are able to pay, mostly sons of farmers and tradesmen.

Another feature of this Charity was a Bartholomew Hickling Bible presented annually by the schoolmaster to one of his free scholars who is most proficient in reading.

In 1910 it was presented to Arnold Edward Archer, son of the Rothley Postmaster. Arnold was killed in action on the 7th September 1918. 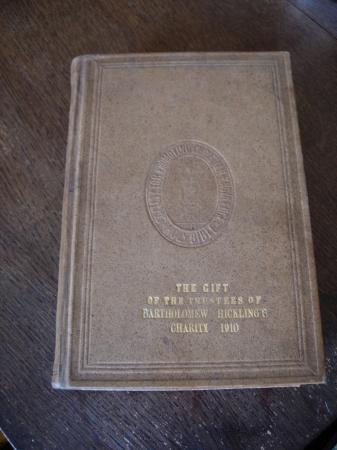 Presented in 1910 to Arnold Edward Archer 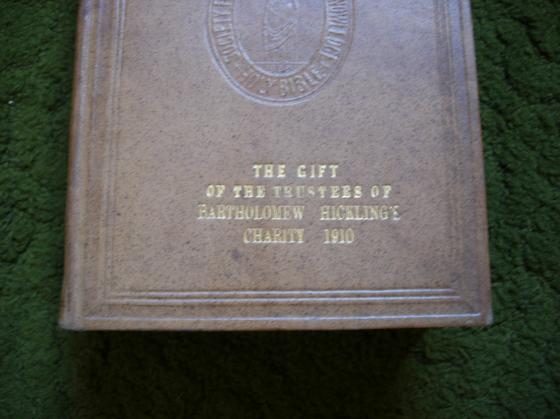 The Gift of the trustees of the Bartholomew Hickling's Charity 1910 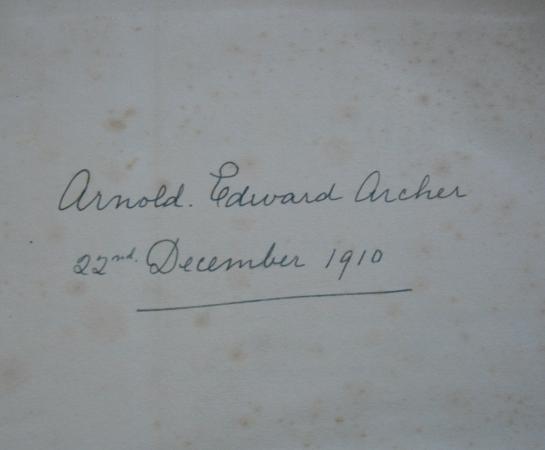 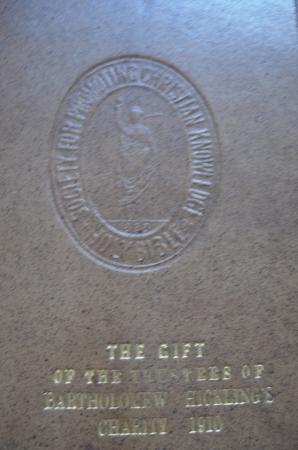 In 1922 the Bartholomew Hickling Trust became the Bartholomew Hickling Education Foundation with six Trustees. The income from the Foundation was to be applied in three different ways:
1. In assisting pupils to attend school, institutions, or classes for the purposes of education other than elementary, by paying their fees or travelling or other incidental expenses, or by providing them with maintenance allowances; provided that candidates for these benefits shall be boys resident in the Parish of Rothley who have for not less than two years at any time attended Public Elementary Schools and who, in the opinion of the Trustees, are in need of financial assistance to enable them to continue their education.

2. In making arrangements approved by the Local Education Authority for attending to the health or physical condition of the boys attending any Public Elementary School in the Parish of Rothley.

3. In otherwise promoting the education including social and and physical training, of boys of the poorer classes in Rothley.

In 1922 the Gross Yearly Income for the Batholomew Hickling Education Foundation was £19.0.4.

In 2011 the fund available was £2,745. This includes the Elizabeth Daniels Trust capital.

The Will of Bartholomew Hickling is held at the Records Office in Wigston. Please click on the following link for more information: