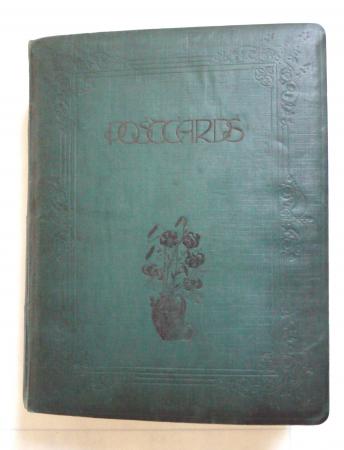 In 2014 we see the 100th year since the start of the First World War and many exhibitions and events are bound to surround us. Some of these events can be something as simple as a family album with a collection of postcards, many sent from the trenches of France and with reminders of what life was like from the Front Line. Postcards and letters had to pass the censors so their messages were very limited in many ways. From time to time a few words give us a story of their conditions but the most revealing message from these postcards is the need for the family to keep writing to the battlefields to support their family and friends.

This Postcard Album belonged to Daisy May Neale of Brunswick Street, Leicester who married Jim (James) Goodrich. Ken Goodrich married to Jean and living in Birstall, is a son of Daisy and Jim and has kindly given permission for the album to be featured on the website as we approach the centenary of the First World War in 2014.

Arch and George were two of the brothers of Daisy May Neale and they sent many cards back home to the family. Joe was Joe Wood who possibly married Daisy's sister Ada. More research is needed to add a little more history to this lovely album.

The embroidered postcards are in excellent condition and so pretty with their colours as vibrant as the day they were sent from the battlefields of France. Some cards were part of a series, others showing British Beauties of the time but all sent in the lead up to the First World War and beyond.

Please click on the following pages to view the postcards and messages: