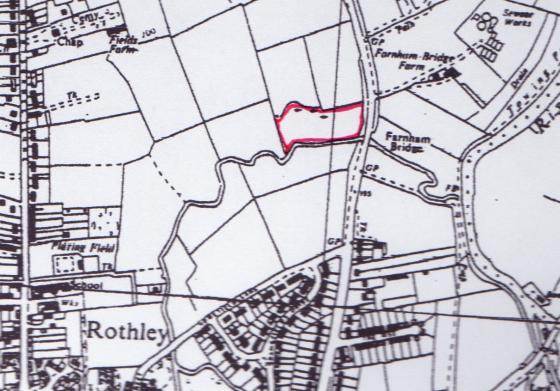 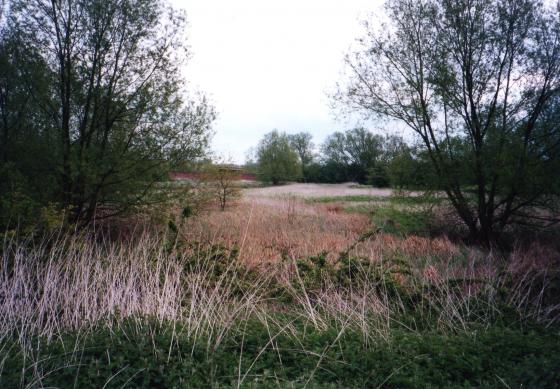 Looking over the swamp to the arched bridge over the old A6. May 2002

We went into the swamp area that borders the old A6 and Rothley Brook. It is a piece of land that has a series of channels that you can only see by walking on the land. There was a good view of the bridge over the A6 and it was interesting to see the number of arches, which must all have carried water in the past. It was understood that in the past the brook was much wider and this certainly indicates it to be a true fact. 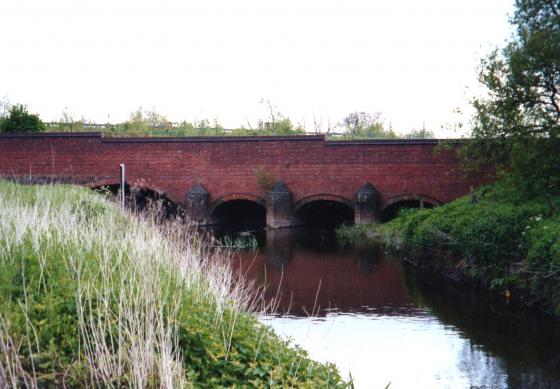 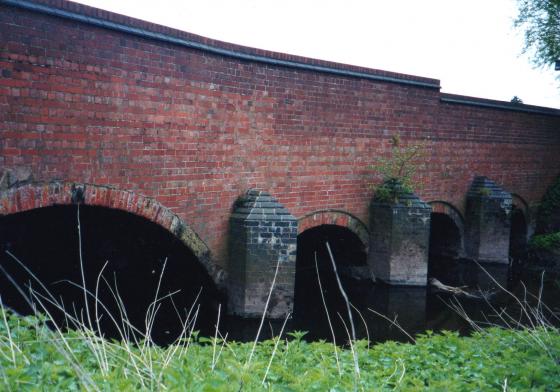 The left hand arch of the five arch bridge. Note the granite piece. May 2002 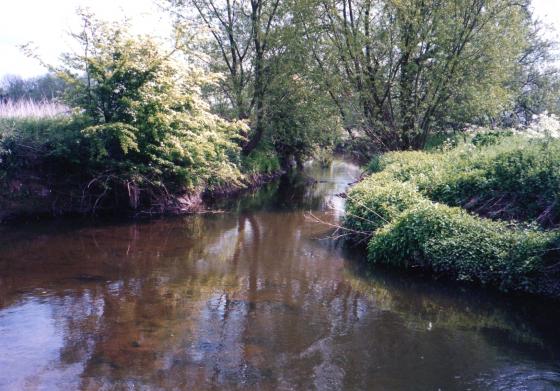 Rothley Brook at the corner of the marsh near to Ancient Tree 58. Was there a bridge over the brook in this area? May 2002

There was a great abundance of stinging nettles and it is advisable to wear wellingtons and thick trousers. The wild flowers are starting to bloom with Lady's Smock, Silverweed and Buttercups much in evidence. There was a good patch of Marsh Marigold. We did not enter the very marshy areas but these are indicated by reeds and best avoided. It could be very easy to get stuck in the mud. 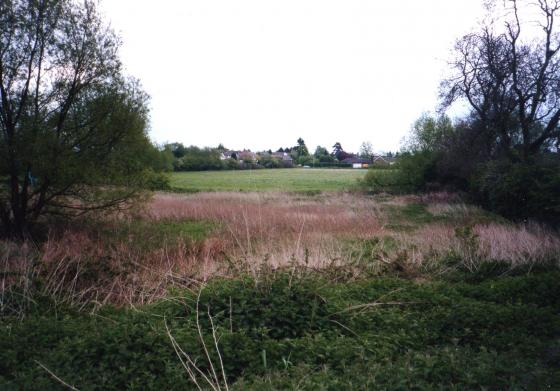 View from the marsh to Loughborough Road and top of Homefield Lane. Rothley Brook runs between the rough land and the pasture field.May 2002 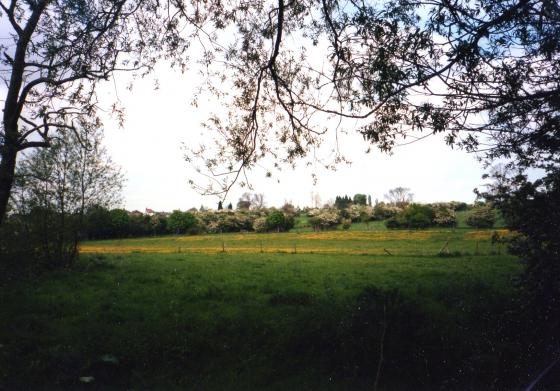 View from the marsh towards Mountsorrel. May 2002 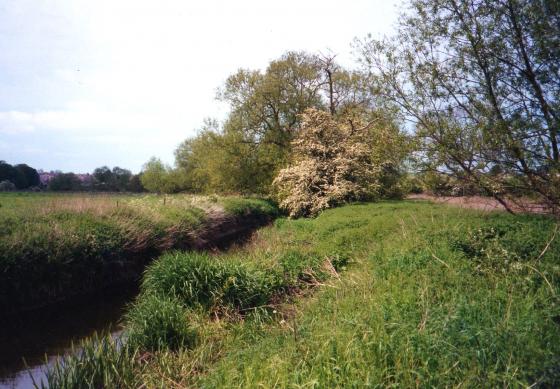 Rothley Brook from the marsh site. May 2002 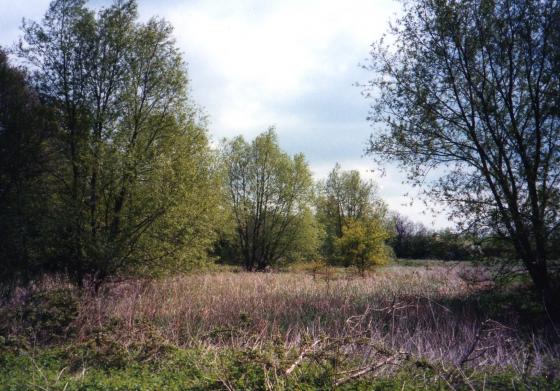 The marsh should not be entered! May 2002

There are some interesting stands of willow and, on the border with the adjoining pasture field, there was one with a three metre girth which was recorded as an Ancient Tree 57 and Ancient Tree 58 with a girth of 3.5m. There were others on the banks of the Rothley Brook but not on the land being recorded. 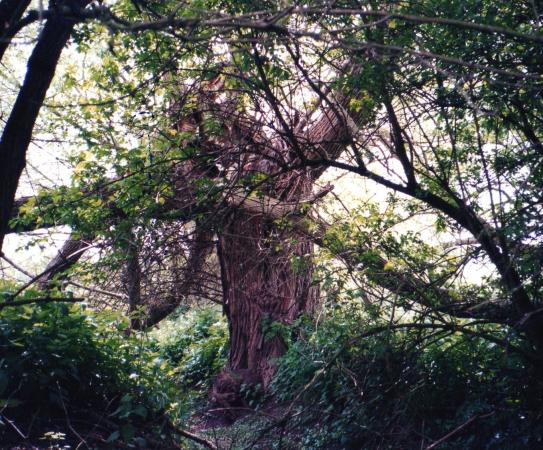 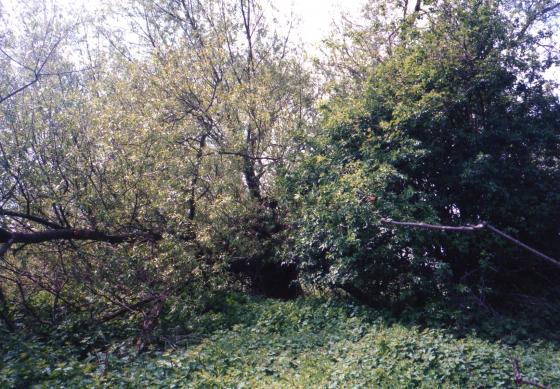 A further visit will be needed when the flowers are more forward and dragonflies and damselflies on the wing.
Whitethroats were calling along the hawthorn hedgerows and this would be the perfect nesting site due to the thick, undisturbed vegetation abutting it.
In the brook there were areas of exposed mud with vegetation and unidentified mammal prints.

The area has all the makings of a SINC (Site of Interest for Nature Conservation). 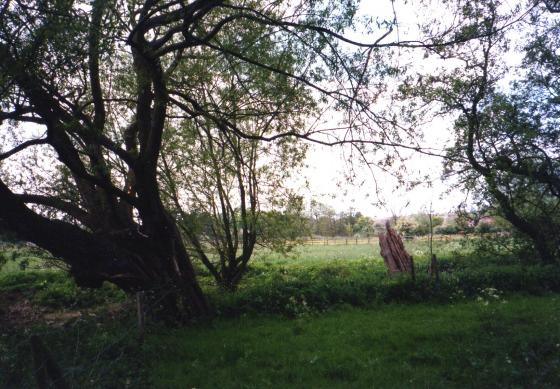 Willows surround the marsh field. May 2002 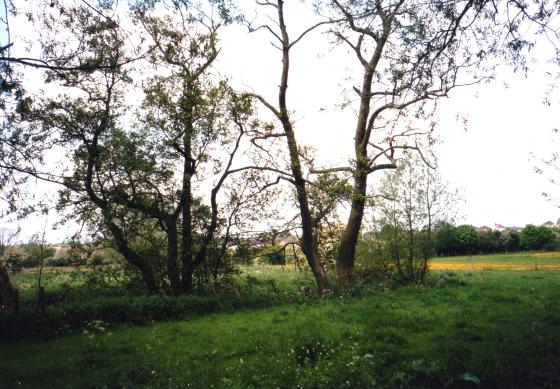 Looking from the marsh field towards Mountsorrel. May 2002

The survey was completed by Charnwood Wildlife on the 17th June 2003 under reference W 5813/3. The Conservation Status was recorded as Parish Level Site and a candidate for designation as a SINC (Site of Interest for Nature Conservation). A list of species is available under the above reference.

In June 2004 I contacted Leicestershire County Council for an update on the Conservation Status but nothing recorded. Charnwood Wildlife does not now exist.

Confirmation still not received from Holly Hayes that the site will become a SINC.
I made a further visit to see what had happened to the site after two years. It was completely overgrown and clogged up with vegetation, especially stinging nettles. There was no safe way to get to the swampy areas and we even tried to get access from a nearby field without success. It is a good example of what can happen to a site that has no management, the swamp vegetation completely fills the basins and where moorhens used to swim is no more.

The hawthorn hedgerow to the right of the entrance gate that I said in May 2002 would be good for Whitethroats has been laid and a ditch dug out resulting in the destruction of the thick vegetation. An example of management that destroys habitat in an area where nothing else is managed.
Water was being pumped from the Rothley Brook to water plants at the nursery.
On the banks of the brook were Banded demoiselles and some good-sized unidentified fish in the brook. 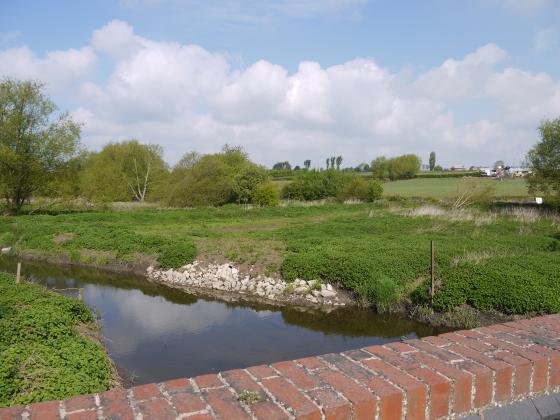 Looking from the old A6 to Farnham Bridge Marsh. May 2013 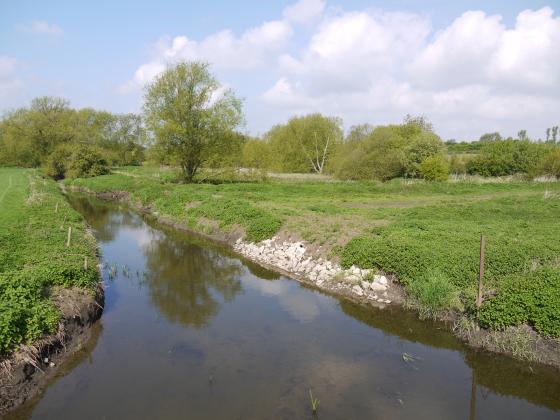 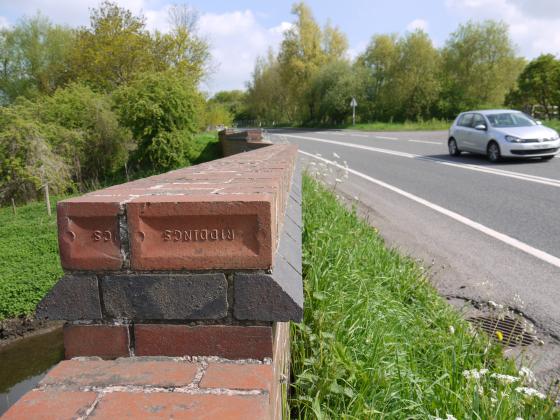 The Brickmakers used to build Farnham Bridge. Just another bit of history. May 2013 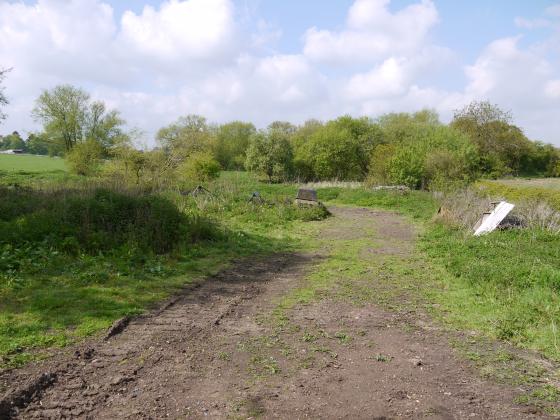 Walking into Farnham Bridge Marsh. Brooklea Nursery Fields Site 130 to the right. May 2013 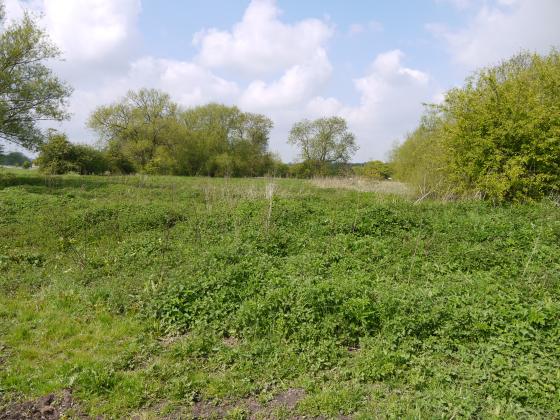 Looking over the marshy area. Rothley Brook to the left. May 2013 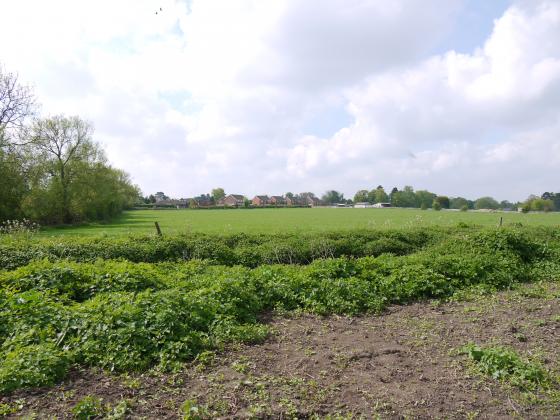 Looking over Rothley Brook to Site 189 Homefield (1) and Homefield Lane. May 2013 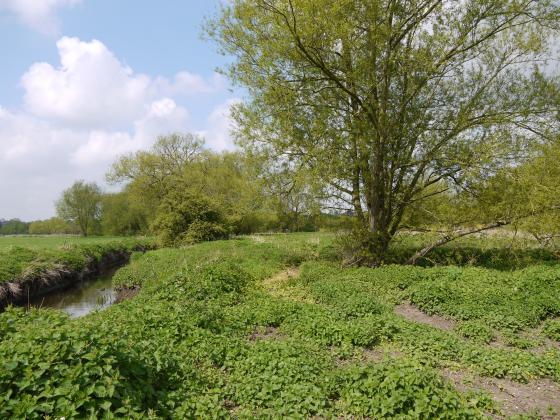 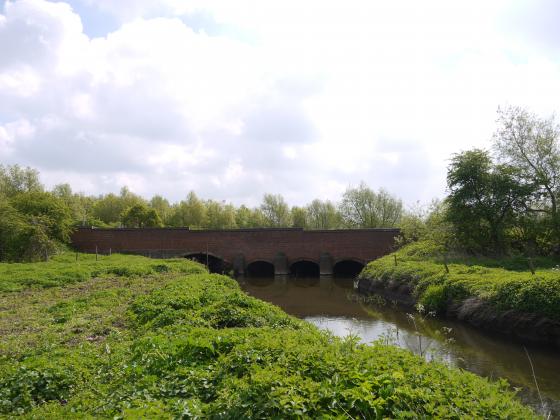 Looking to Farnham Bridge. May 2013 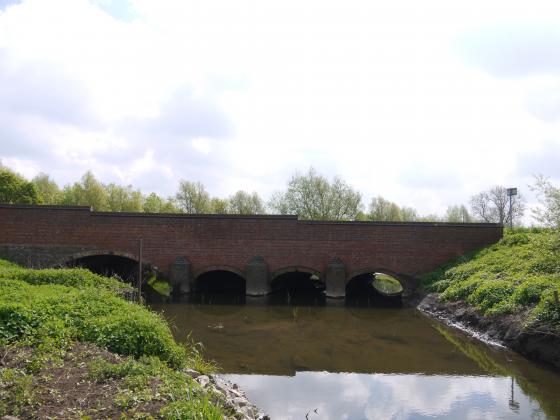 Farnham Bridge was mainly cleared of debris in April 2013 to help with water flow and flooding. May 2013 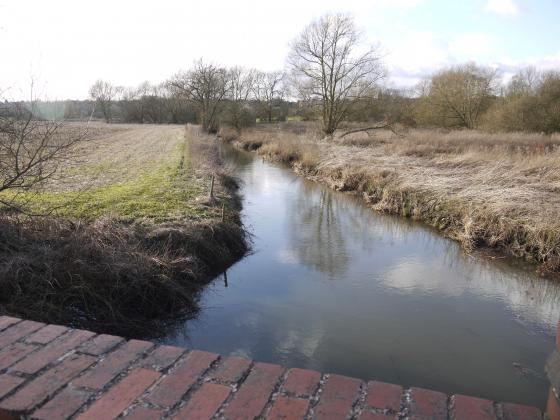 Looking from Farnham Bridge, Loughborough Road, with Farnham Bridge Marsh to the right and Site 189 Homefield 1 to the left. February 2015 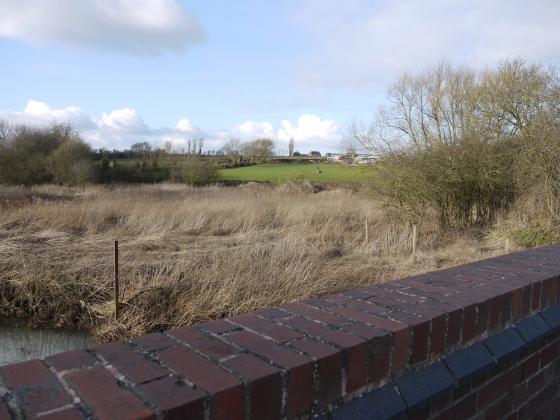 Looking over Site 131 with Site 130 Brooklea Nursery buildings in the distance. February 2015 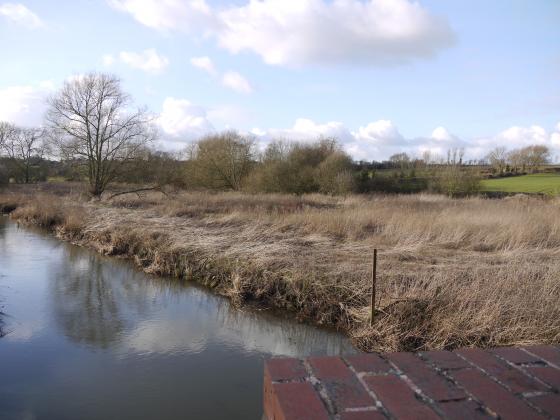 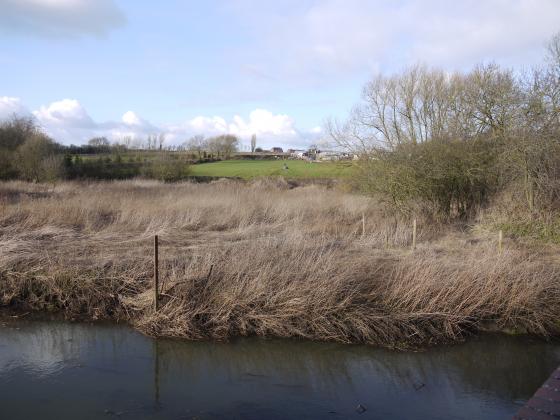 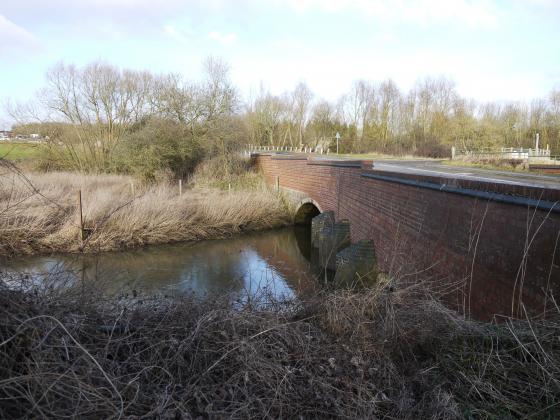 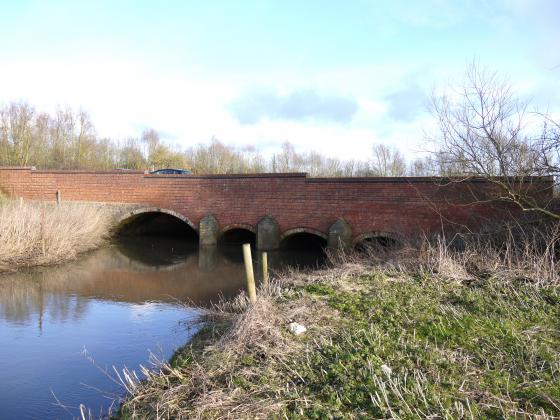 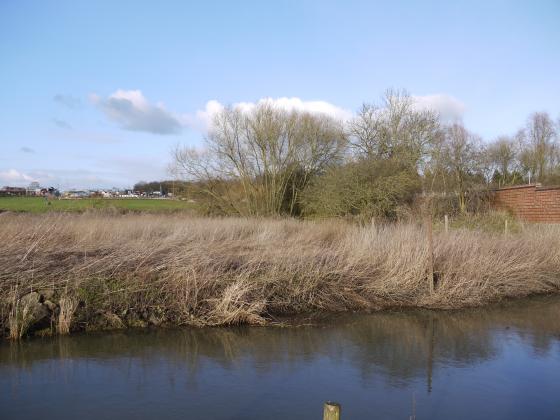 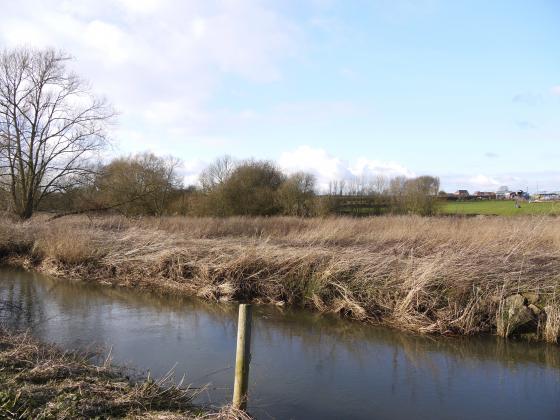