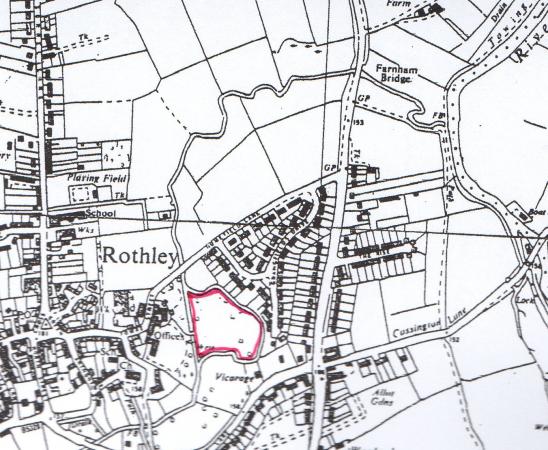 ACCESS TO THIS PLAYING FIELD WEEKEND MORNINGS ONLY OVER PRIVATE LAND AND STRICTLY TO THE PATH. USED AS A PLAYING FIELD FOR LOCAL JUNIOR FOOTBALL CLUB.

This playing field is completely surrounded by water consisting of the Rothley Brook and a channel created to form a water feature in the grounds of The Grange. The Grange is for sale and there needs to be an alternative access possibly through a small area of grassland fronting Homefield Lane and with the construction of a bridge and car park. This could mean the felling of trees near the current gate but these are not classed as ancient.
The playing field is used for football and kept mown. The whole area is surrounded with a large margin of vegetation which will need further investigation when it has grown.
The site has no conservation status. Charnwood Wildlife surveyed it on the 2nd October 2001.

Alternative access was not created as thought and when The Grange was developed the only way in was through the grounds which are strictly private. Access on foot only down the pathway. 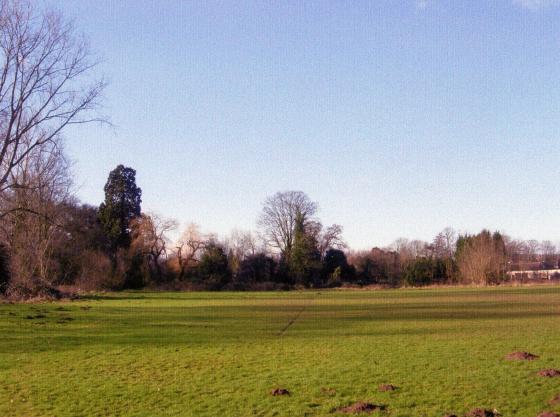 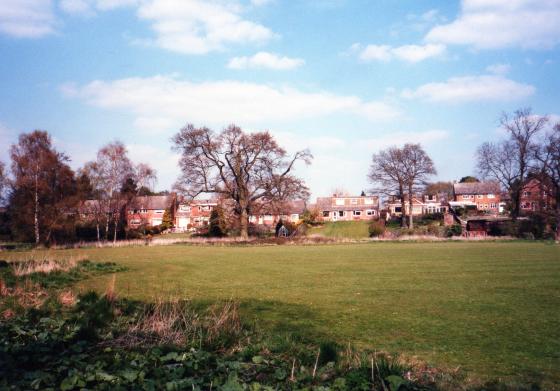 In 2004 the Rothley Parish Council considered buying this playing field but being responsible for the upkeep was the determining factor in not doing so. A survey was carried out to see if the area would make a suitable wildlife site but it would need a tremendous amount of work to make this happen. In a survey carried out in 2001 by Charnwood Wildlife it was not noted as a site with conservation status.
The large areas of scrub surrounding the whole of the field are very invasive and would need to be controlled to allow grassland plants to survive.
However, nothing is impossible these days (2004) with the generous grants available but a dedicated working group would need to be formed if this project is to go forward. This group would always be needed as the work of maintaining a wildlife site never ceases and lack of management is the biggest downfall of community wildlife sites. 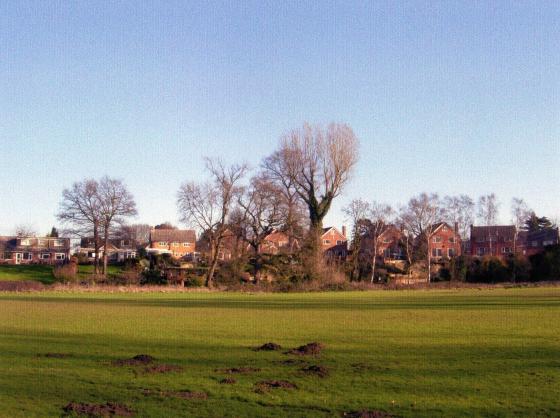 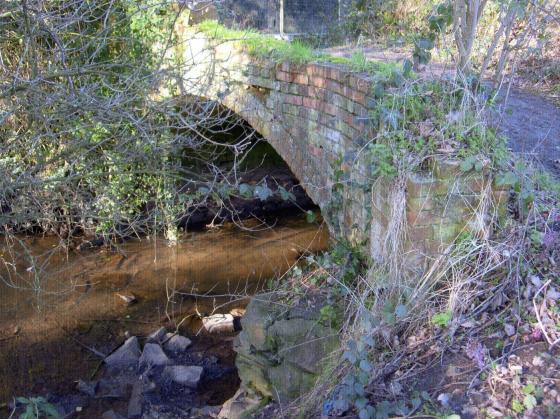 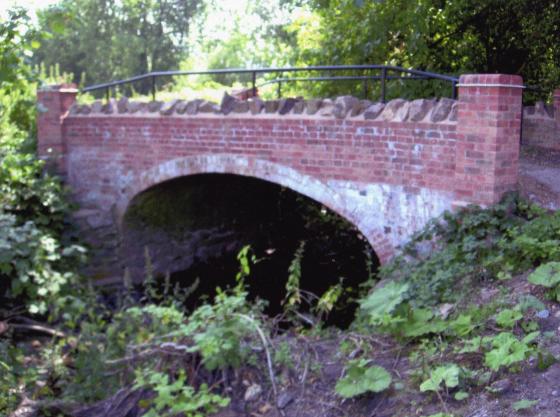 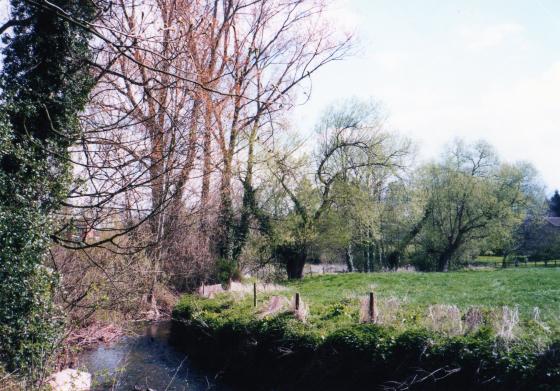 Rothley Brook bordering The Grange Playing Field to the left and Site 146 Priests Meadow to the right. The 'new' vicarage extreme right on Hallfields Lane. April 2002 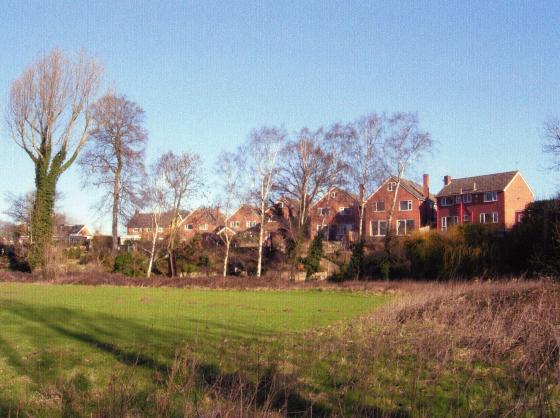 Looking over Rothley Brook to the cul-de-sac end of Grangfields Drive from The Grange Playing Fields. February 2007 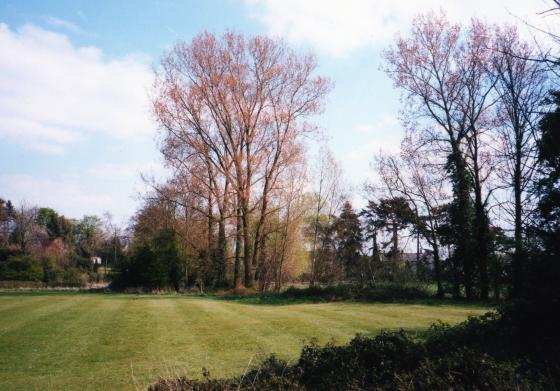 The Grange Playing Field surrounded by Rothley Brook with Site 146 Priests Meadow to the right. April 2002 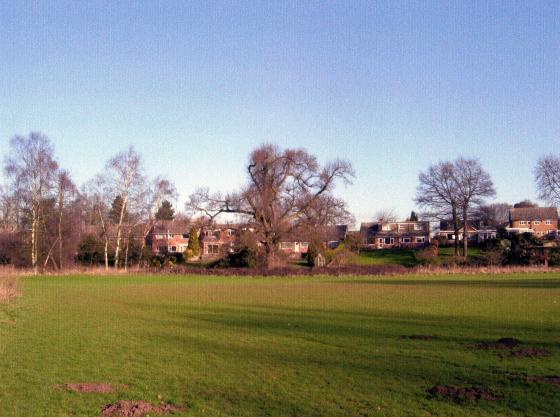 Looking over Rothley Brook to Grangefields Drive over The Grange Playing Fields. February 2007 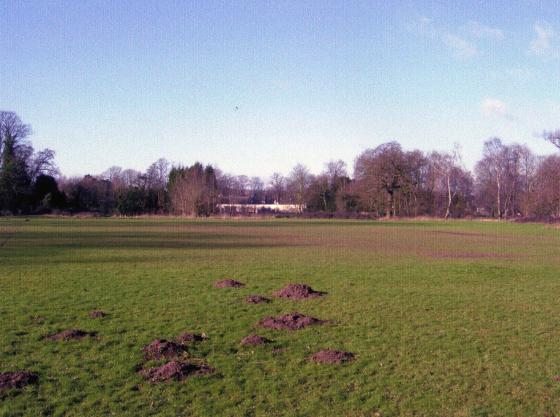 Looking to the buildings on The Grange car park when it was used as offices. February 2007 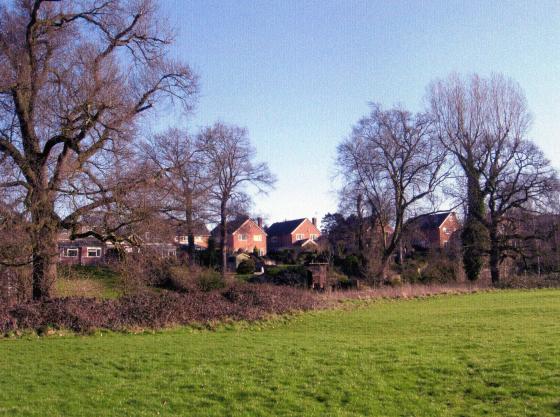 Looking over Rothley Brook to Grangefields Drive from The Grange Playing Field. February 2007 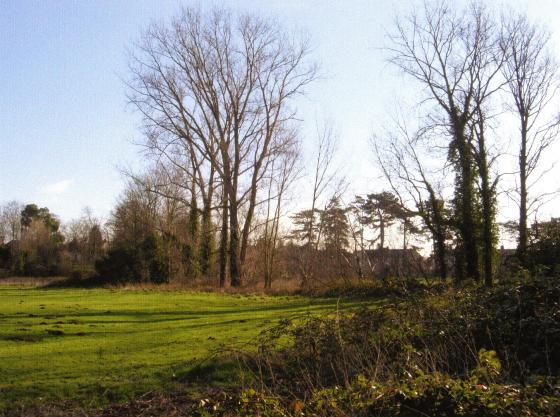 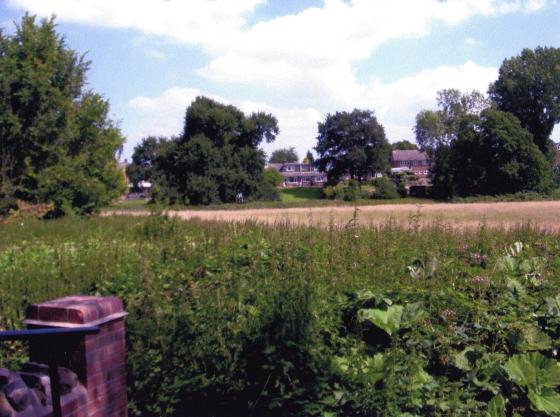 Looking over The Grange Playing Field from the re-built bridge to Grangefields Drive. July 2008

Rather a dull, drizzly day but a walk was taken around the perimeter of the playing field to see what wild flowers were growing in the outer scrub areas. Due to brambles and nettles it proved rather a painful experience. However, the following plants were found:
Lady's Smock, Creeping Buttercup, Meadow Buttercup, Bulbous Buttercup, Ground Ivy, Great Hairy Willowherb, Red Campion, Lesser Stitchwort, Dandelion, Common Cleavers, Bramble, Stinging Nettle, Cow Parsley, Hogweed, Daisy, Hemlock, Ground Elder, Nipplewort, Garlic Mustard, Herb Bennett, Common Wintercress, Germander Speedwell, Common Sorrel, Shepherd's Purse, White Deadnettle, Butterbur, Creeping Thistle, Common Catsear.
Due to very dense scrub it was impossible to get to the banks of the Rothley Brook to check out the vegetation.
There are some sizeable trees in the playing field which are part of a really good area of mature trees in the adjoining Grange gardens, the Parish Church, the Old Vicarage, Priests Meadow and Homefield Lane. Birds noted were Great Spotted Woodpecker (2), Blackcap, Chiffchaff, Robin, Pheasant with two young and Garden Warbler.
It will be interesting to see what the future holds. 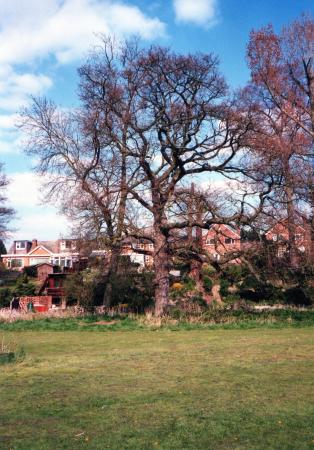 There are lovely trees surrounding The Grange Playing Field by the side of Rothley Brook. April 2002 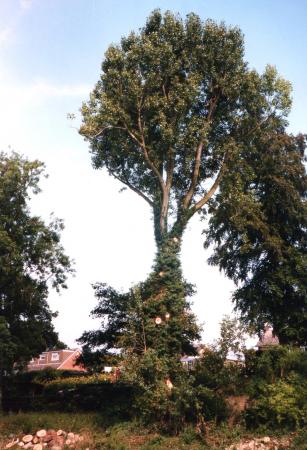 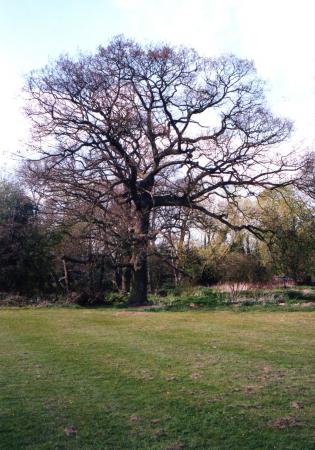 Ancient Oak Tree 41 with a girth of 3.8m on the banks of Rothley Brook in the Grange Playing Field. Looking to Homefield Lane. April 2002 Ancient Oak Tree 40 with a girth of 3.8m on the banks of Rothley Brook in The Grange Playing Field. April 2002 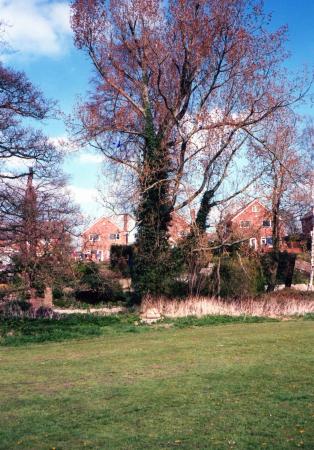 Ancient Tree Black Poplar Tree 39 with a girth of 4.0m on the banks of Rothley Brook in The Grange Playing Field. April 2002 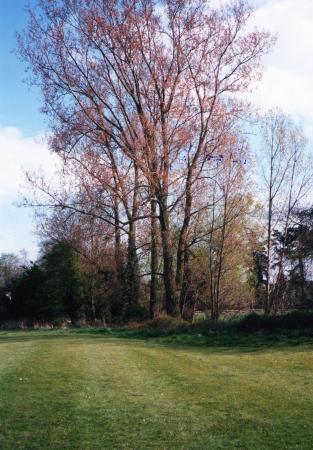 Ancient Black Poplar Tree with a girth of 3.8m in this group on the banks of Rothley Brook. Site 146 Priests Meadow to the right. April 2002 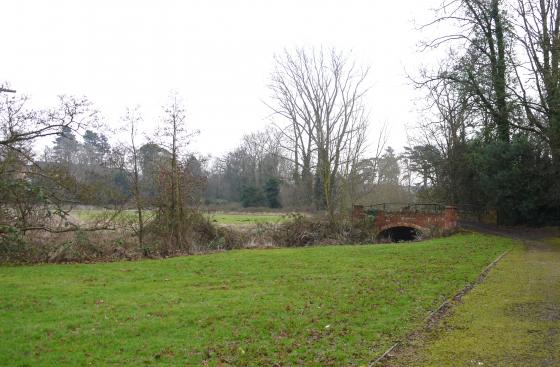 The entrance from the private grounds of The Grange. January 2015 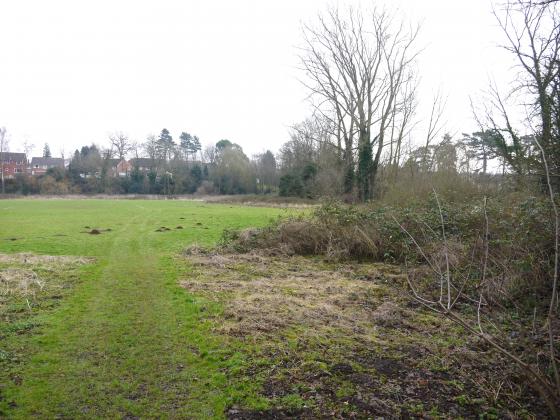 Entering the playing field and looking to Grangefields Drive over the Rothley Brook. January 2015 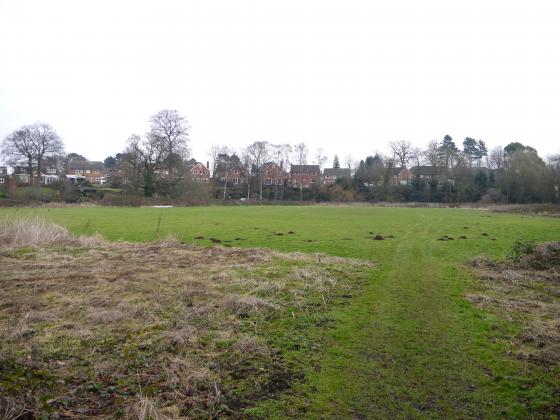 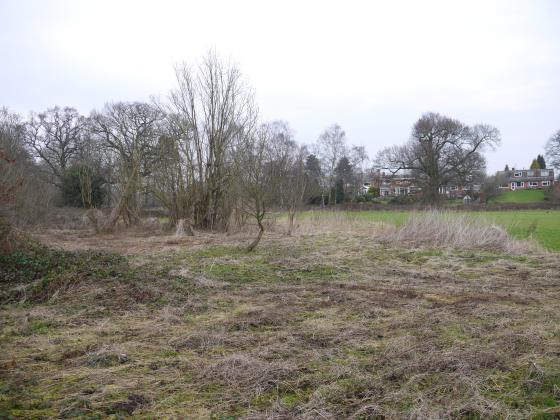 Looking to Homefield Lane with the ornamental channel to the left and Rothley Brook to the right. January 2015 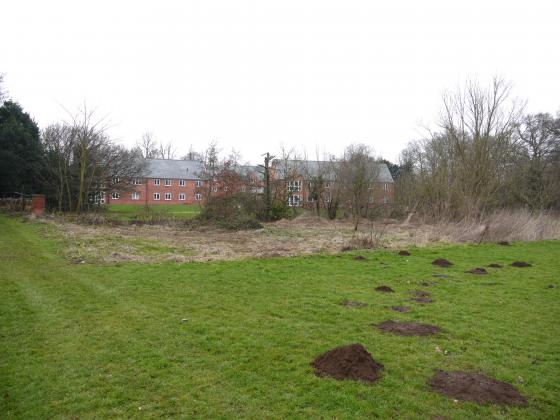 Looking over the ornamental channel to the modern part of The Grange. January 2015 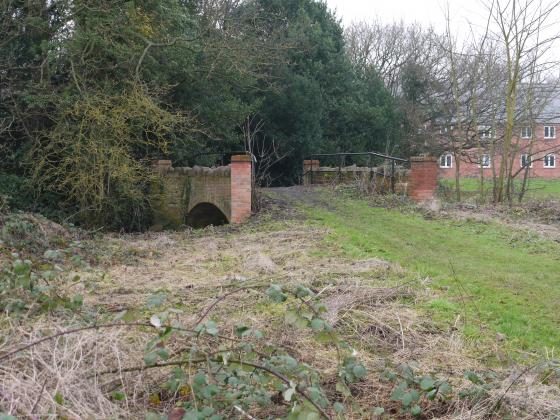 Exit by the same bridge over the ornamental channel. January 2015 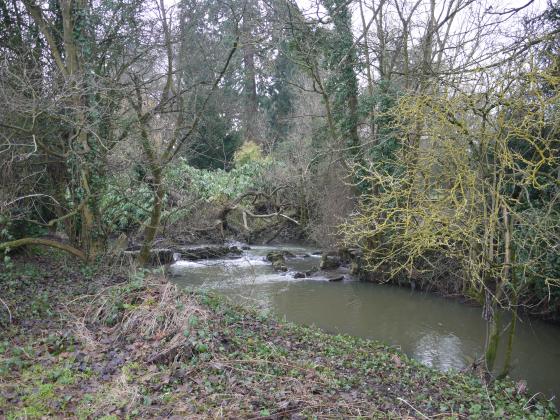 Looking from the bridge to the ornamental channel. January 2015