SWITHLAND LANE RUNS FROM THE CROSSROADS BY ROTHLEY STATION DOWN BEYOND THE RIDINGS TO HALSTEAD ROAD. IT IS A PUBLIC HIGHWAY.
THE TREES LINING THE ROAD ARE IN A GROUP TREE PRESERVATION ORDER.
SWITHLAND LANE WAS MADE A CONSERVATION AREA IN 2010 AS PART OF A TRIANGLE WITH WESTFIELD LANE AND THE RIDGEWAY. THIS WAS TO GIVE PROTECTION TO THE HOUSES, MANY OF WHICH WERE BEING ALTERED OUT OF ALL PROPORTION TO THE ORIGINAL DESIGN AND CHANGING THE VISUAL EFFECT OF THIS LOVELY PART OF ROTHLEY. 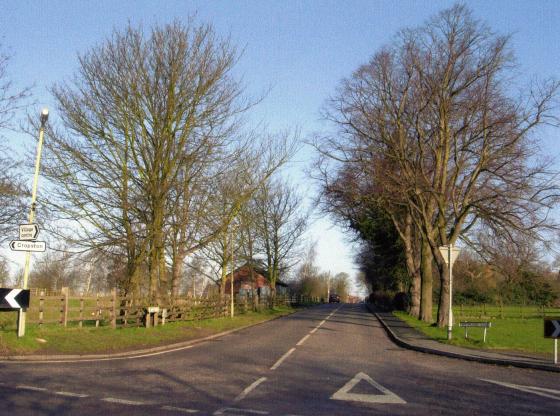 Looking from Rothley Station to The Ridings. March 2007

This is a beautiful, long road in Rothley with interesting architecture, lovely gardens and ancient trees. 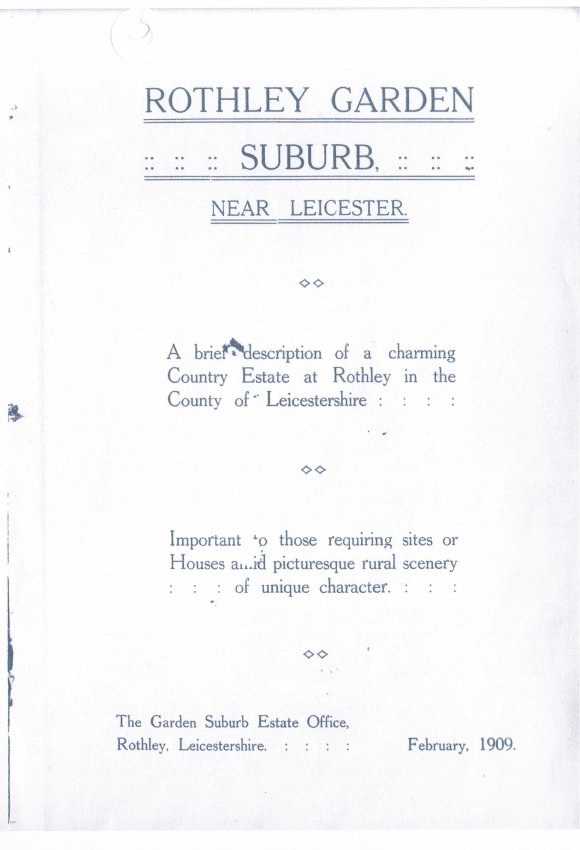 Swithland Lane (part) and The Ridgeway were built as the Rothley Garden Suburb and that is why we have some beautifully designed houses in theses areas. The booklet is available to view in the Local Studies folder in the Rothley Community Library. 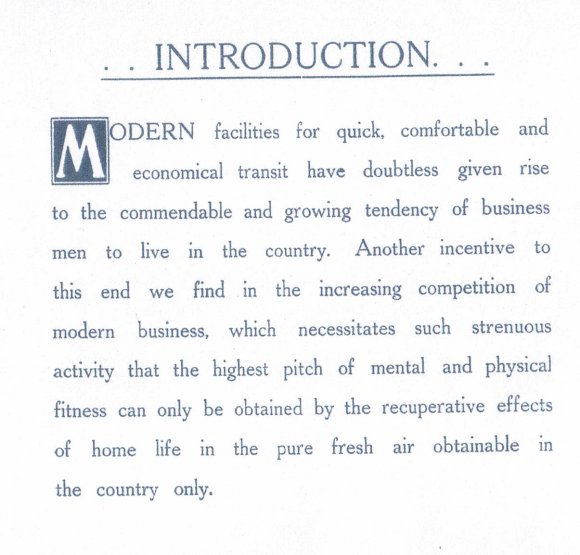 The Introduction to the booklet 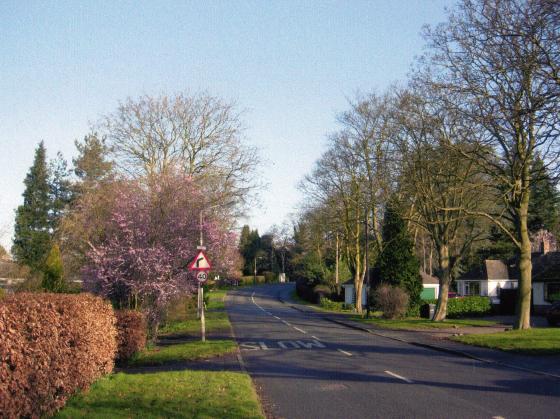 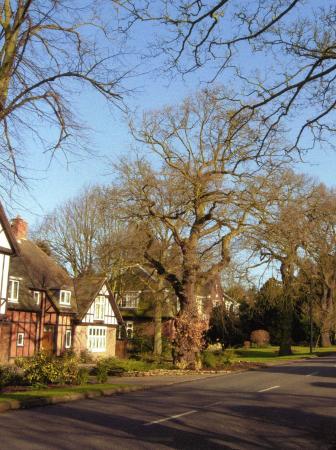 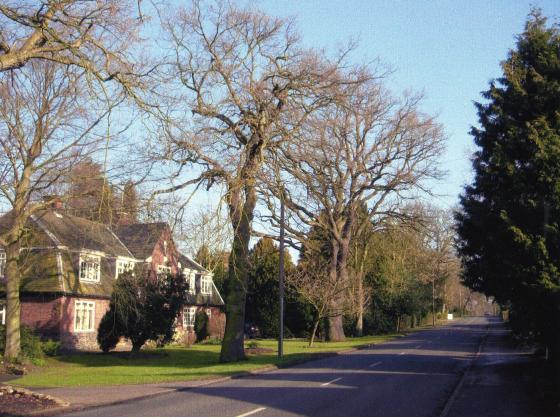 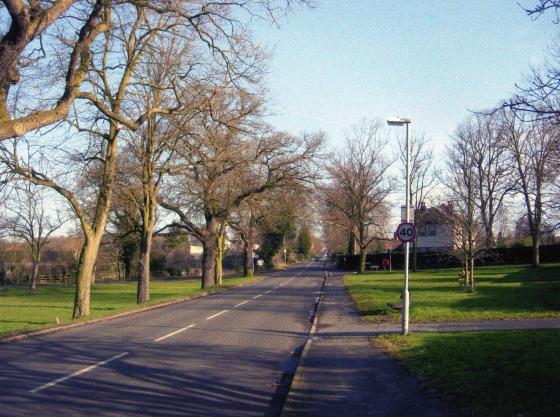 At The Ridings crossroads. March 2007 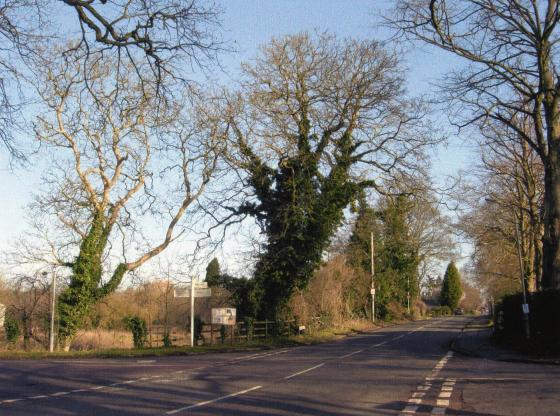 Walnut trees of Brickyard Farm to the left, on the corner of Swithland Lane and The Ridings. March 2007 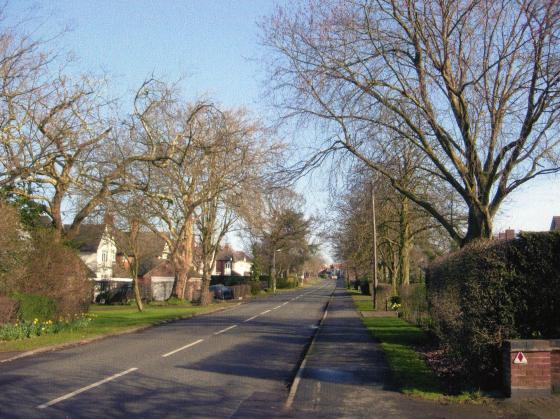 From The Ridings crossroads, along Swithland Lane to Halstead Road. March 2007 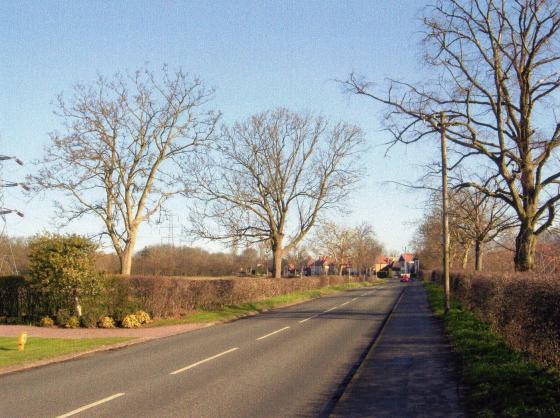 Continuing as above. March 2007 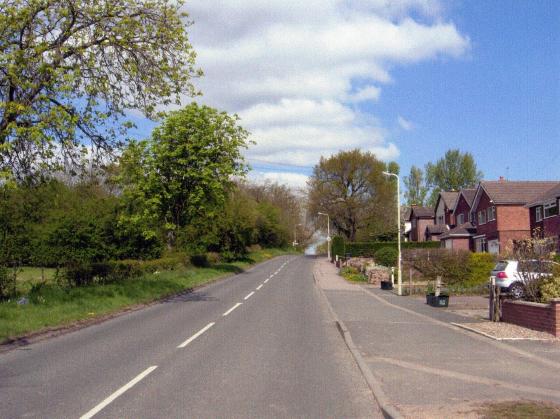 The lower part of Swithland Lane was once part of the Rothley Ancient Ecclesiastical Boundary running along the front of these houses before turning in and along an ancient hedgerow before coming out into modern West Cross Lane just beyond Gypsy Lane. 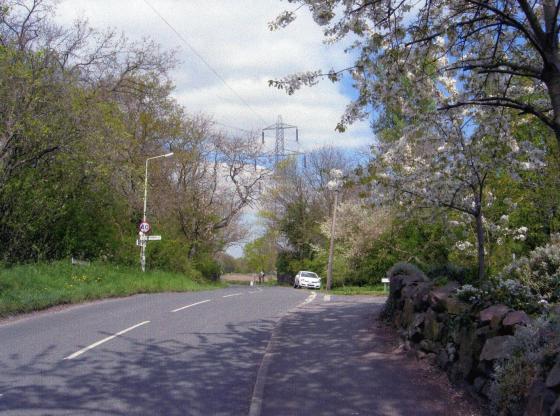 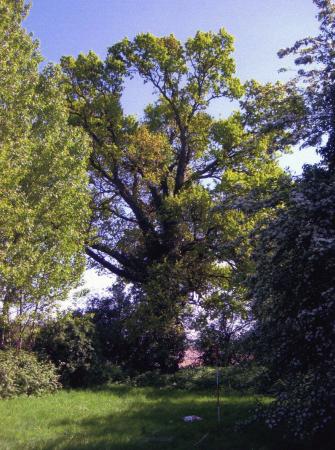 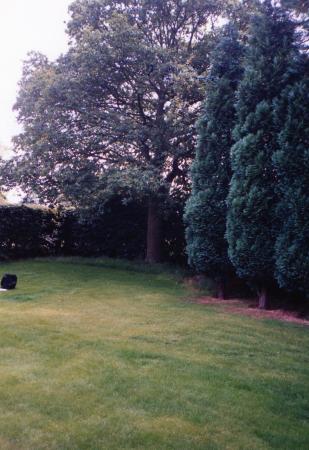 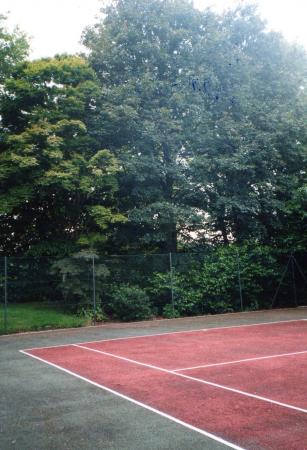 This oak has a girth of 2.1m and in a garden that was once part of a very large woodland garden surrounding 'The Homestead'. This was a farm in earlier times with cottages. The surrounding land was sold about 40 years ago and two houses built. A lot of the trees were retained. July 2002 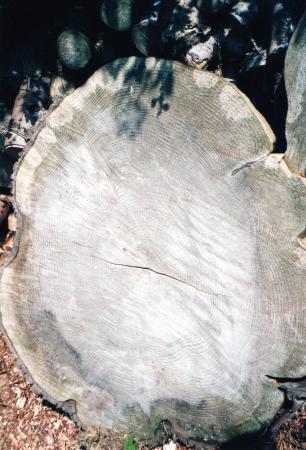 Also in the above garden was a large Cedar and in the gale of November 2000 the owner watched the top half twist around as though in a tornado. The gale threw the tree over into the lawn and made a hole 3 feet deep. The remaining trunk was cut down as it looked unsightly but the slices remained on site as a reminder. July 2002 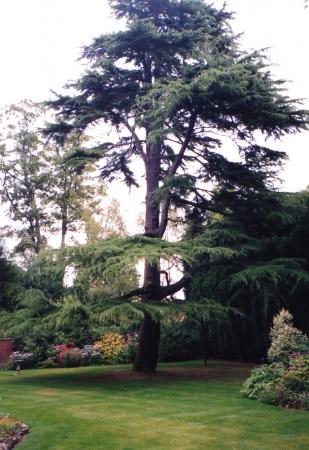 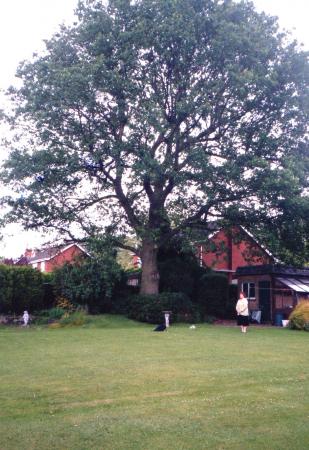 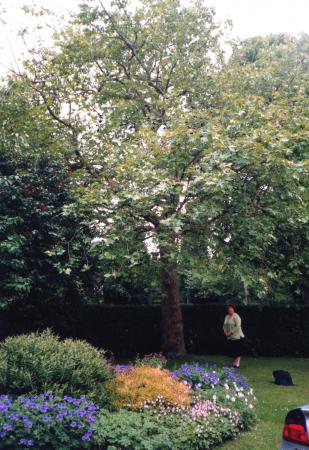 A scarce tree in Rothley-a London Plane with a girth of 1.8m with proud owner Jean. June 2002 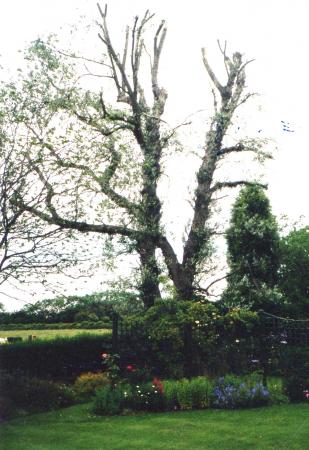 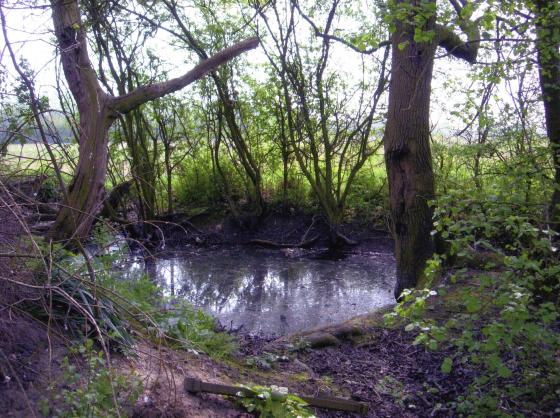 This stint starts at the junction of Swithland Lane with Rushey Lane, Wood Lane and Bond Lane and abuts Stint N5, Bond Lane.

This stint is within the current Parish Boundary.

The Boundary Post dated 1840 is the starting point for stints W1 and N5 and a well maintained low granite wall leads to the field boundary wall that runs along this part of Swithland Lane which is the boundary of the current Rothley/Mountsorrel Parish. There are two good hawthorn trees at this point. The granite wall is mainly in very good condition but mostly overgrown by brambles and stinging nettles and can only be seen in winter. There is a lot of moss on the stones. This is dry stone walling. There is one old Elderberry in Stint W1D.

At least the brambles protect the wall from stone stealers.

Stint W2A continues with the boundary granite wall but towards the end of this part of the stint we suddenly find a hedgerow of Blackthorn, which is on both sides of the wall. In W2B the wall suddenly ends but the double blackthorn continues right to the end of the 120m stint. At the point where the wall ends we see the start of a ditch with a built up track into the field and the ditch then continuing. It is from this track that we now find more shrubs and ancient tree and hawthorn stumps. There is a small Ash Tree at the end of the stint and newly sawn down small trees with the initials MO cut into the wood. He will be remembered forever!

It is interesting to note that young trees have been sawn down on the other side of the road along the boundary of Nunckley Hill Spinney.

This stint was done during a period of lovely warm, sunny weather and the hedgerows and trees were looking fresh and lovely. The hedgerow plants of Greater Stitchwork, Red Campion, Hedge Woundwort, Wild Arum,Stinging Nettle, Ground Elder, Ground Ivy, Common Cleavers were all either flowering or growing. Also Bracken in places.

This stint has good amounts of blackthorn making a tall, solid part of the hedgerow together with hawthorn, elder, dog rose and elm. There are two young oaks, which will make good trees if allowed to continue their growth and two small ash trees. There has recently been some cutting back of small trees to ground level but this will enable the remaining trees to flourish.

There is evidence of ancient tree stumps with the remnants still visible under the moss so, in the past, this must have been a good boundary with mature trees.

In one part there are some large granite stones with some smaller ones and may point to a wall being there in the past. In stint W1 there is a very good granite wall.

A good ditch runs along this stint.

In the final part of this stint, W3d, the boundary has been cut through by the Mineral Line that was constructed to take granite from Mountsorrel Quarry to the Swithland Sidings of the Great Central Railway. However, the ditch emerges on the other side of the bridge as far as the end of this stint.

Location:
Over Halstead Road, along the houses fronting the far end of Swithland Lane
Date: 2nd May 2007
OS REF SK57081422-SK57131399
This part of the boundary has very little to record as it has been lost by house building for the whole stint. Just on the corner with Halstead Road is a house with a granite wall built with very large stones at the base and built up with smaller stones. In Stint W1 there was a very good example of such a wall so this could be significant. There is a large Oak Tree in the garden on the boundary of the next house. The end of this stint takes us to the end of the houses before the next part of the ancient boundary leaves the highway in an interesting direction.

THIS IS A VERY EXCITING PART OF THE ANCIENT BOUNDARY
From the end of Stint W4 where the houses finish and the road runs by the side of a triangular paddock on Swithland lane the boundary runs along the inner hedgerow of the triangle. The stint starts at the entrance of a long, narrow drive to a 1948 pre-fab dwelling set in a natural garden area.
Running down the drive is an excellent mixture of hedgerow trees, which have not been cut back or disturbed, the most intact of any hedgerow so far. There is a good ditch with hedgerow species on both sides. There is good evidence of a bank down the length of this stint.
In one part there is a large species gap but this is an area of elm, one still alive confirms this and one dead, so these have been cut down and burnt in the adjoining field as evidenced by an ash pile and stump remains.
By the old garage the hedgerow becomes impenetrable for a short distance but access is gained in the last 30 metres of the stint. This gives an excellent view of the wide ditch, showing signs of moisture in the driest April since records began, and the bank with a double hedgerow.
At the end of this stint is a Pond, Pond 41 Bradgate Wong Pond, which had a good quantity of water considering the lack of rain in the month. This pond is shown on the 1885 map. To the side of the pond is an Ancient Oak Tree 580 which is not quite on the boundary but it has a girth of 4.2m so an important tree.
The species count in this hedgerow gives an age of 575 years.

This stint starts off at the end of the garden boundary at SK57171389 and ends at SK57211377.
At the start it has all the species as found in Stint W5 but when we get into the next field the hedgerow has been decimated and brambles totally dominate apart from one stretch which is bare of all species. Where there is Blackthorn in the second 30m it has been cut down to 1m in a box shape. The ditch is still well shown and the horses in Site 273, the Calico and Woollen Field, are fenced in by wire.
This is a very good example of how an ancient boundary can be lost within a few yards of such an excellent hedgerow of species.
This is the start of a long, straight section of the ancient boundary and the current civil parish boundary.
It was good to have the chance of seeing a real piece of ancient hedgerow before it gets 'the treatment' to tidy it up.

To find out more about the survey (RAPS) please click on the following link: